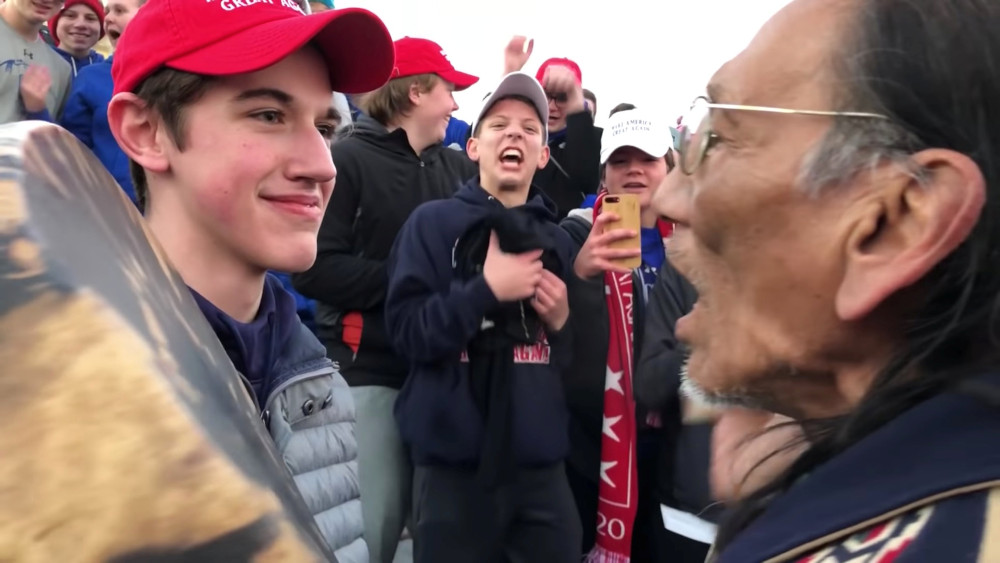 Nick Sandmann, a junior at Covington Catholic High School in Park Hills, Ky., and others students from the school stand in front of Native American Nathan Phillips near the Lincoln Memorial in Washington in this still image from video Jan. 18, 2019. The Washington Post settled a defamation lawsuit July 24, 2020, filed by his parents Ted and Julie Sandmann. (CNS/social media via Reuters/Kaya Taitano)

The Washington Post reached a settlement July 24 with the family of Nicholas Sandmann, the Kentucky Catholic high school student who sued the newspaper last year for defamation over its coverage of an incident that occurred after last year's March for Life that quickly went viral.

Sandmann, who graduated this past spring from Covington Catholic High School, sought $250 million in damages from The Washington Post, saying the newspaper defamed Sandmann in seven articles and on social media. The Post has maintained its reporting was accurate and fair and did not disclose terms of the settlement.

"We are pleased that we have been able to reach a mutually agreeable resolution of the remaining claims of the lawsuit," Post spokeswoman Kris Coratti said in a statement.

The coverage in question centered on the student's encounter with a Native American activist on the steps of the Lincoln Memorial.

Last July, a federal judge in Kentucky dismissed the lawsuit against the Post, ruling the challenged statements were either opinion, not defamatory or not specifically about Nicholas Sandmann. But last October, when the judge was presented with a motion to reconsider an amended complaint against the newspaper, he allowed the case to proceed.

The Sandmann family settled a similar lawsuit against CNN this January for an undisclosed amount. The family's suit against NBC is still pending and they also have filed suits against Gannett, ABC, CBS, The New York Times and Rolling Stone magazine.

"The fight isn't over. 2 down. 6 to go," tweeted Nicholas Sandman July 24, his 18th birthday, referring to the settled lawsuits and those remaining. "Don't hold your breath @jack," he added, referring to Jack Dorsey, co-founder and CEO of Twitter.

His tweets about The Washington Post lawsuit stirred mixed reaction echoing the response after the event in question and its coverage. In Twitter replies, many people were supportive of the student and accused the media of jumping to conclusions in their coverage, while others said his response at the time of the incident was wrong and he shouldn't be bragging about lawsuit profits now.

The incident in question, for which Sandmann claimed he received biased coverage, transpired at the Lincoln Memorial Jan. 18, 2019. That day, Sandmann, wearing a "Make America Great Again" hat, smiled just inches away from Nathan Phillips, a Native American leader, as Phillips chanted and beat a drum.

The day after that encounter, clips from a video of it went viral almost immediately and showed students surrounding Phillips while appearing to be mocking him. The clip caused immediate outrage, particularly on social media. But by the next day, extended footage of how the situation unfolded revealed that another group had taunted the students and some responded back. Phillips said he had walked over to the students and that group as an intervention.

After the initial video went viral, Sandmann said in a statement he had "received physical and death threats via social media, as well as hateful insults."

Sandmann's school and the Diocese of Covington initially condemned the students' behavior but then backed down as more information came forth and they called for a third-party investigation into the situation.

The conclusion of that report, released by the Covington Diocese Feb. 13, 2019, found no evidence the students had issued "offensive or racist statements" that they had been accused of doing.

In a letter to parents of Covington Catholic High School last year, Bishop Roger J. Foys of Covington said his hope the investigation would "exonerate our students so that they can move forward with their lives has been realized."