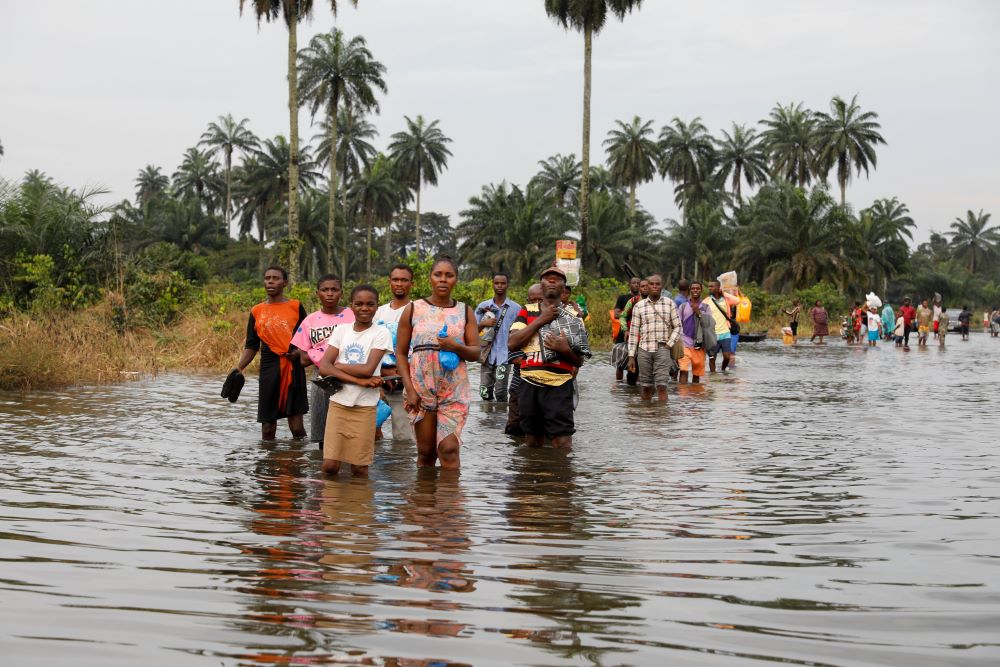 Residents wade through floodwaters in Obagi, Nigeria, Oct. 21, 2022. Nigeria is currently experiencing severe flooding that has destroyed homes and farmlands, especially in communities along the floodplains of the two major rivers — the Niger and the Benue. (CNS/Reuters/Temilade Adelaja)

Emeka Okoye, a 54-year-old farmer, and his family got trapped when a heavy flood bubbled into their apartment in southeastern Nigeria. He quickly moved his family from the ground floor and relocated them upstairs.

"It wasn't a good experience for my family and me. Some of my properties were swept away by the gushing flood, while others were damaged," Okoye said of the early October flooding.

Emeka also lost his farmland — his yams, cassava and potatoes.

"I expected a bumper harvest this year due to excess rain, but the flood washed everything away," he told Catholic News Service.

Fr. Edwin Udoye, the provincial coordinator for Caritas in Onitsha, said this is the worst flood disaster in Nigerian history.

He said by mid-November, there were already 30 camps for people displaced from their homes in the affected states. Many of those camps were overcrowded, he said, and "even our schools have been converted" to help house people.

"Our hospitals are also open for treatment of displaced persons who are battling malaria because many of them had indiscriminate exposure to mosquito bites," he told CNS.

In Bomadi, 37 of 53 parishes suffered severe flooding that displaced even priests and nuns, and Udoye said they are currently taking shelter at the bishop's residence.

He said parishes like St. Mathias Catholic Church in Amarata and St. Patrick in Ovum, both in Nigeria's oil-rich Bayelsa state, are helping with funds and food items.

Udoye said Nigerians would have to deal with food scarcity because of submerged farmlands.

Nigeria is currently experiencing severe flooding that has destroyed homes and farmlands, especially in communities along the floodplains of two major rivers — the Niger and the Benue.

More than half of the 36 states of the country are affected. So far, more than 600 people have died, with more than 1.4 million people displaced. Properties worth billions of naira have also been destroyed, and over 247,000 acres of farmland submerged by water.

The flooding has been attributed to unusual rainfall, overflowing rivers, Cameroon's release of water from the Lagdo Dam, poor waste management and settlements on flood plains.

Early this year, the Nigerian Meteorological Agency warned of the impending devastating floods and, in September, the Nigeria Hydrological Services Agency informed Nigerians that the Lagdo Dam operators in Cameroon had released water from the dam reservoir.

Still, residents in communities along the floodplains of the two major rivers were not evacuated. In Anambra state, for instance, 76 people fleeing the high floodwaters died in a boat accident. 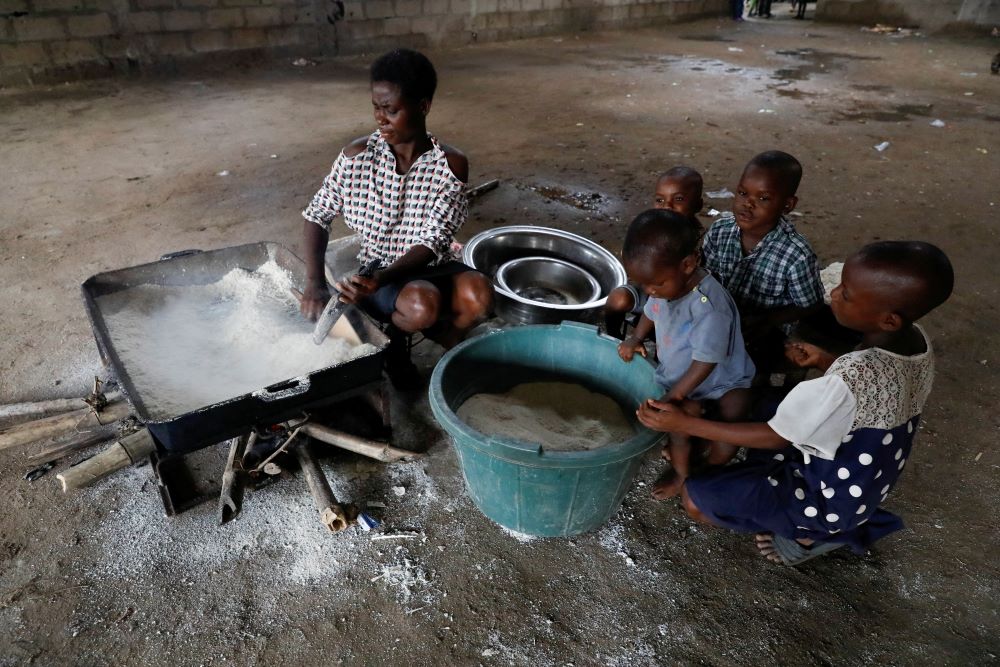 A woman displaced by flooding cooks food for her family at a school converted to relief camp in Ogbogu, Nigeria, Oct. 21, 2022. More than half of the 36 states of the country are affected by flooding. (CNS photo/Reuters/Temilade Adelaja)

The Justice, Development and Peace Commission of the Archdiocese of Abuja is partnering with the U.S. bishops' Catholic Relief Services to distribute aid to people affected by the floods. CRS does not work directly with communities but relies on partnership with nonprofit organizations to provide humanitarian assistance to people in need.

Josephat Abaagu, chairman of the commission, said, "This is what we are called to do, especially at a time like this."

When the need arose, Archbishop Ignatius Kaigama of Abuja wrote letters to parish priests for help, and the archdiocese received 10.5 million naira (US$23,800), which was distributed among nine dioceses.

"When the funds get to the dioceses, the bishops of those 11 dioceses will extend this gesture to the victims without religious affiliation," he said.

Lokoja, the capital of Kogi state, is situated at the confluence of the Benue and Niger rivers. Chief John Egwemi, a traditional ruler and a Catholic, opened his palace for victims of the flood.

Amos Achana, one of the locals who benefited from Egwemi's shelter, said he was helpless and devastated when his house was overtaken by the flood; he also lost livestock. He told CNS that most of the beneficiaries, including his family, were members of St. Michael Catholic Church.