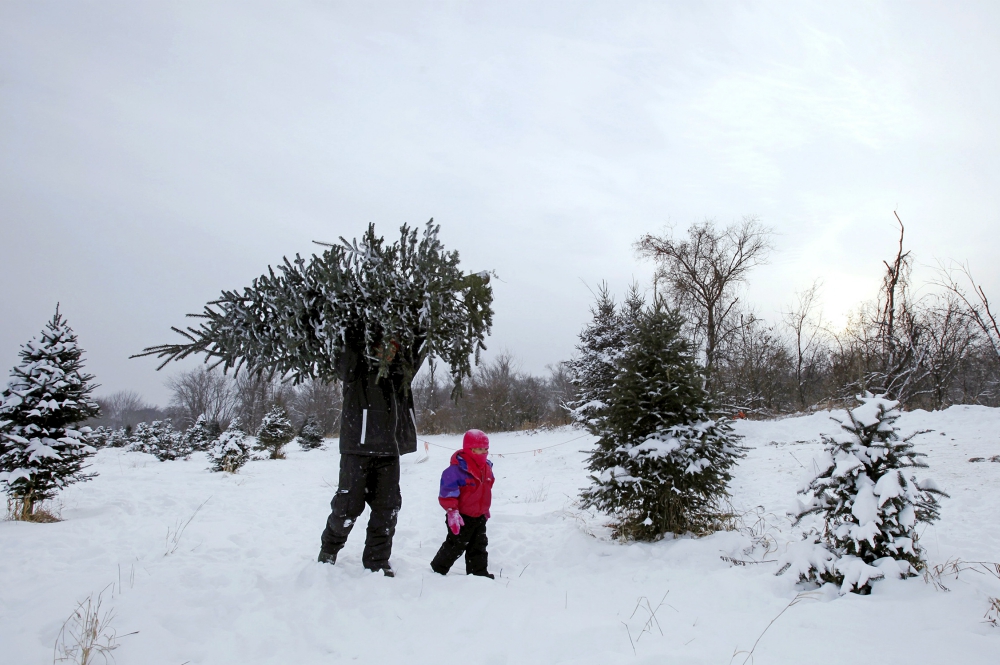 20131212nw1673
Tony Baker and his daughter Mesa take away a Christmas tree from Rum River Tree Farm in Anoka, Minnesota, in 2013. (CNS/Reuters/Eric Miller)

Burning Questions is a feature series here at EarthBeat where we try to answer those questions smoldering in your mind about climate change and religion — from basic to complex, and everything in between.

Our latest Burning Question attempts to help those stumped by that annual post-holiday chore: What to do with the Christmas tree when it's time to take down the decorations? (We'll abstain from wading into the debate of when that exact date is.)

So if you're one who pines over how best to recycle this year's spruce, this question is fir you.

Wait, who even still sets up a real tree?

Earlier this month, The Washington Post reported that in 2018 about 21% of Americans put up a real Christmas tree, compared to 55% electing for an artificial version.

Over the last 10 years, Americans have purchased an average of about 28 million real Christmas trees a year, according to a survey conducted for the National Christmas Tree Association, a tree farms trade group. In 2018, the country bought nearly 33 million real trees, compared to 23 million fake trees.

For both types of trees, sales increased in the last year, a trend credited to millennials as they grow older and start their own families.

Not necessarily, though that is a common assumption.

The argument for artificial trees is that their reusability lowers their environmental impact. 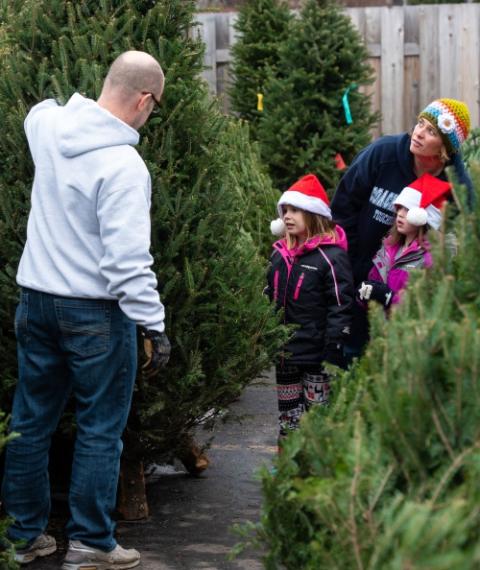 Gregg Michalski holds a Christmas tree for his wife, Joanne, and their daughters, Kendra and Paige, to examine at the Knights of Columbus Christmas tree lot in De Pere, Wisconsin, Dec. 1, 2018. (CNS/The Compass/Sam Lucero)

But most experts agree that cutting down a Christmas tree is actually "greener." That is partly because of the materials it takes to create an artificial tree — most are made of plastic, which are made from oil — and the carbon footprint attached to its shipment, with most coming from China.

In the case of most real Christmas trees, they are grown like crops, and new trees are replanted as others are cut down. Dedicating land to the growth of trees has benefits in itself, through enriching the soil and removing carbon from the atmosphere as they grow.

The Guardian reported last year that a 6-and-a-half-foot artificial tree has a carbon footprint equivalent of 40 kilograms of greenhouse gas emissions, which is much higher than real trees, no matter how they're disposed. Buying from a local tree farm can also reduce the carbon footprint.

So what's the best way to dispose?

There are a number of ways you can go.

Many people opt to put their Christmas trees on the curb for pickup or drop them off at designated sites. (Curbside, if available, is seen as better for the planet, by limiting the number of cars and emissions used to transport the trees.)

While trees are decomposable, that process can take some time, and in a landfill, results in the emission of methane, one of the most potent greenhouse gases. The Guardian reported that a 6-and-a-half-foot tree in a landfill has a carbon footprint of 16 kilograms of carbon dioxide, whereas a tree that is mulched or replanted "can have negligible or even negative emissions."

With a simple web search, you can locate drop-off spots in many cities, such as Chicago and Los Angeles. You can also search the Earth911 database for local tree drop-off sites.

Are those the only options?

The Arbor Day Foundation has collected a list of sustainable ways to recycle your tree, many of them within your own yard.

They suggest using the tree as firewood, though only outdoors. The remaining ashes can then be used to add nutrients to your garden (and keep away insects).

Placing tree branches in your garden can act as insulation or as a garden edge.

For the crafty, they suggest using the needles to make air fresheners, or cutting the trunk into drink coasters.

Evergreen branches are also seen as a good base layer for new compost piles.

Even just keeping the tree in your yard can serve as a winter shelter or feeder for birds and other animals. But birds aren't the only animals that can benefit from discarded Christmas trees. They can act as fish feeders, too.

As it turns out, Christmas trees sunk into lakes, ponds and streams can provide ideal habitats for fish. The branches provide natural cover, and also can act as a food source as algae builds up on them.

In the St. Louis area, the Missouri Department of Conservation collects Christmas trees to create fish habitats in area lakes.

A similar effort is happening across Kentucky, where the state's Department of Fish and Wildlife Services will use the trees to replenish woody habitats for fisheries in lakes and reservoirs. Likewise, Arkansas has drop-off sites across the state for use in creating fish habitats.

In Brazoria County, just south of Houston on the Gulf of Mexico, the parks department holds an annual "Dunes Day" in January where the previous year's Christmas trees are used to restore sand dunes, which play an important role as a barrier to flooding and beach erosion.

There really are a lot of uses for Christmas trees, huh?

And not just the ones in your family room. 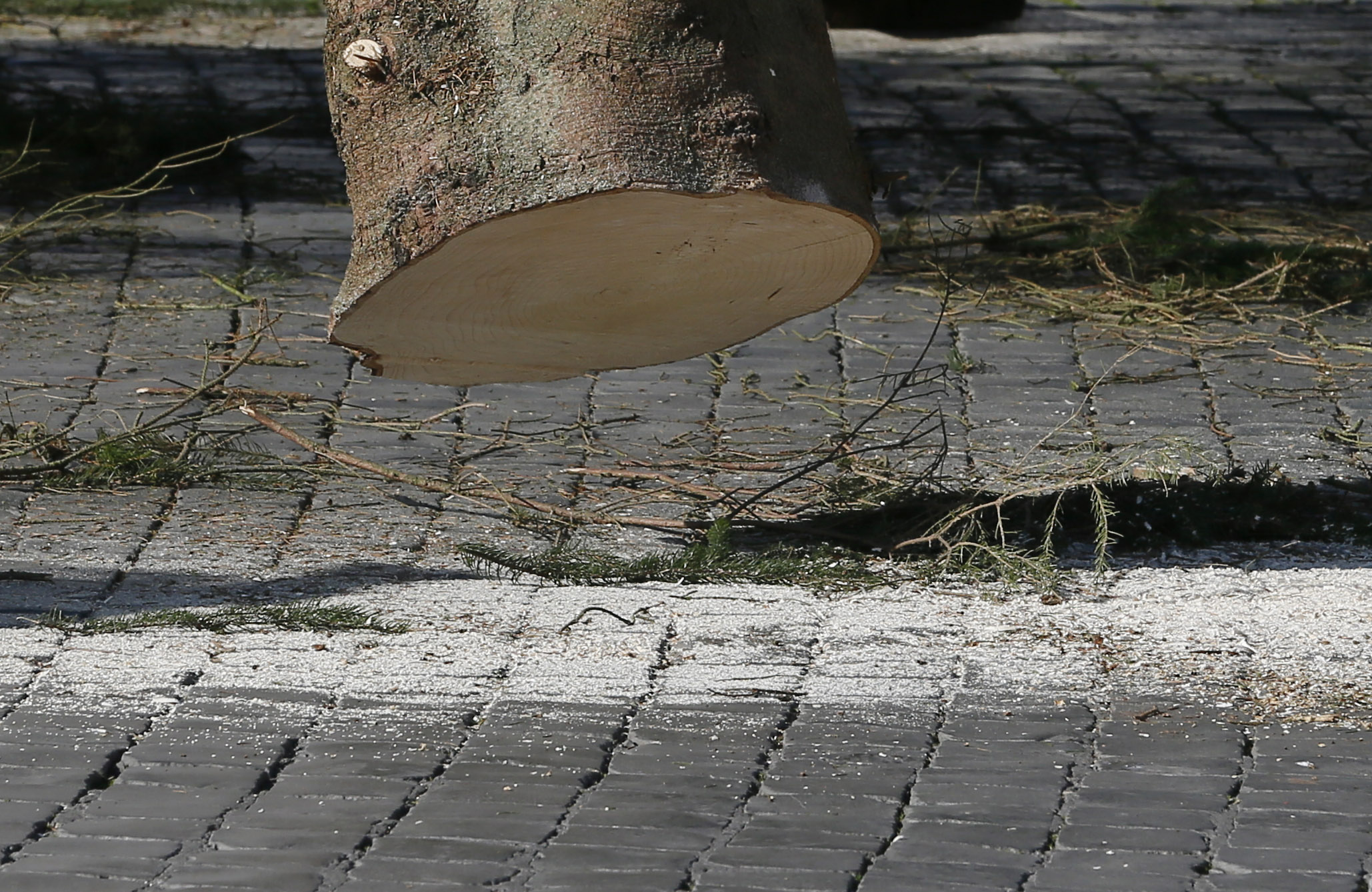 Sawdust from the Christmas tree is seen during its positioning in St. Peter's Square at the Vatican Nov. 19, 2015. (CNS/Paul Haring)

The annual tree that towers over Rockefeller Center in New York is donated to Habitat for Humanity, which mills it into lumber for a future home.

Anything else we should know?

No matter how you decide to recycle your Christmas tree, maybe the most important step is to ensure that all ornaments and decorations are first removed.

And it's worth remembering that while finding a useful second life for your Christmas tree is eco-friendly, its environmental impact pales compared to changing other habits around the holidays, for instance shopping and traveling.

And adjusting those lifestyle patterns aren't just for the holidays — they're evergreen.