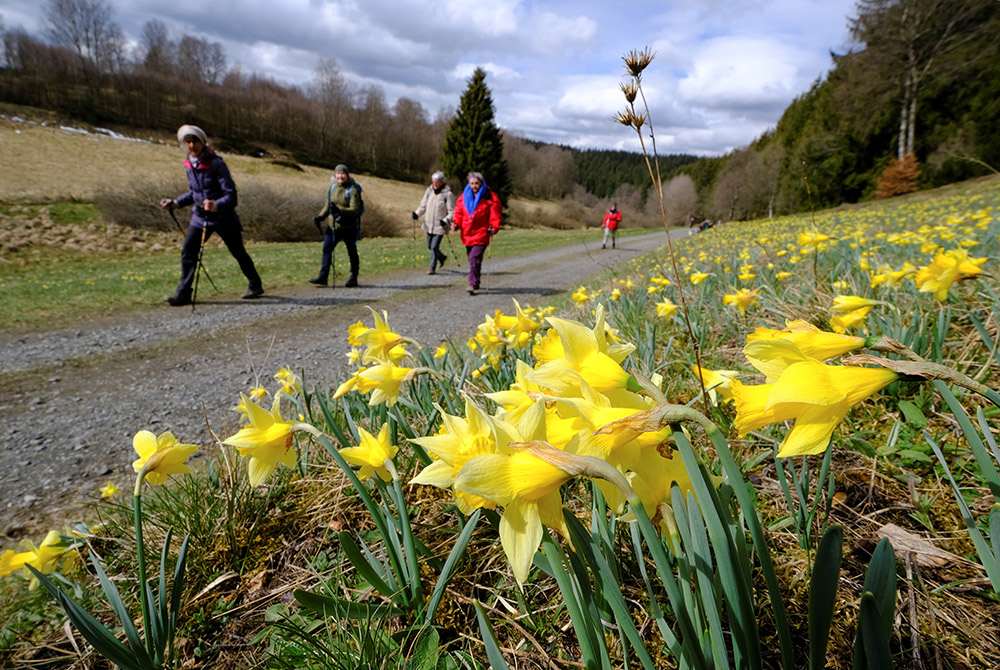 Hikers walk past a field of wild narcissi flowers in the Eifel region close to the German-Belgian border, April 16, near Höfen, Germany. The Vatican has consulted with many people around the world for its Laudato Si' Action Platform, which launches in October. (CNS/Wolfgang Rattay, Reuters)

The months leading up to the Vatican's unveiling of its Laudato Si' Action Platform in late May were filled with meetings among many people around the world.

In assembling the ambitious initiative to make the global church a beacon of faith-fueled sustainability, the Vatican consulted far and wide and assembled a web of working groups to offer feedback and fine-tune the massive undertaking.

Matthew Worsham, the energy efficiency and renewable energy manager at the University of Dayton, was among those called into service.

"I mean, how often do you get a letter inviting you to join a project that the Vatican is doing?" he told EarthBeat.

More work is yet to come for Worsham and the hundreds of people and Catholic organizations tapped by the Dicastery for Promoting Integral Human Development as part of its broad consultation to refine the action platform before its full launch, set for Oct. 4, the feast of St. Francis of Assisi and the end of the annual ecumenical Season of Creation.

The Laudato Si' Action Platform is an effort to move the global church to sustainability by inviting all types of church institutions to embark on seven-year, action-oriented journeys to combat climate change and address environmental issues in the spirit of Pope Francis' encyclical "Laudato Si', on Care for Our Common Home."

Catholics can join the inaugural wave by registering their organizations on the Laudato Si' Action Platform website between now and October. In the meantime, the working groups are focused on adapting the platform's seven overarching Laudato Si' goals to the context of each sector and varying circumstances. 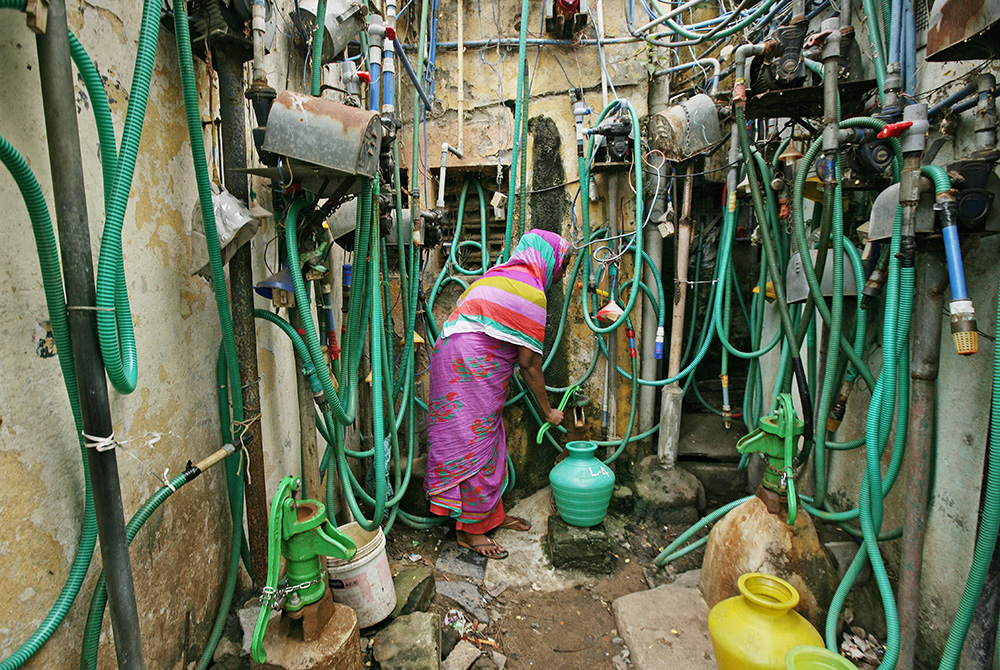 A woman uses a hand pump to fill up a container with drinking water in Chennai, India, in this June 25, 2019, file photo. Water protection is one of the Laudato Si' Action Platform's seven overarching goals. (CNS/P. Ravikumar, Reuters)

The seven sets of goals cover areas like responding to cry of the Earth and the cry of the poor, ecological economics, ecological education and spirituality and adopting simple lifestyles.

Each goal is broken down into several outcomes — for instance, under cry of the Earth are climate change mitigation, biodiversity protection, water protection and distribution and care of the land. Each of those outcomes are then broken into specific actions, or footsteps in the jargon of the platform's seven-year journey. In the case of biodiversity protection, suggested activities include planting native trees and grasses and protecting pollinators.

The dicastery has outlined a general roadmap for the seven years, with the first spent developing plans and gathering resources, followed by five years of concrete efforts toward the goals, through the roughly 90 suggested actions. The final year will be a "sabbatical" to celebrate accomplishments.

Since the working groups began meeting in the spring, they have played a key role in shaping the action platform's bold ambitions into achievable actions. Their early input made clear that a single global rubric of actions would be unworkable.

Paz Artaza-Regan, the program manager coordinating creation care teams for the Catholic Climate Covenant and a member of the working group on parishes and dioceses, said one challenge has been adapting the general actions to circumstances in different regions of the world.

For example, one suggested action is the installation of solar panels. The Archdiocese of Monterrey, Mexico, however, suggested adding the option of using solar water heaters or biodigesters for converting waste to gas, which might be more feasible and less expensive in rural areas.

Artaza-Regan said the parishes and dioceses working group has discussed the possibility of pairing parishes in different parts of the world, not only to share the sustainability journey, but also to help provide financing or resources for projects.

Along with the Covenant, other U.S. participants in the parishes and dioceses working group include the archdioceses of Atlanta and Chicago. They join justice and peace commissions of bishops' conferences in Australia and the Philippines, as well as representatives from dioceses in Cape Town, South Africa; Lagos, Nigeria; Costa Rica; Mumbai, India; and Assisi, Italy, among others. CAFOD, the Caritas agency in the United Kingdom, leads the group.

The university sector working group has 73 members representing 38 universities in 21 countries. Michael Schuck, a theologian at Loyola University Chicago and co-director of the International Jesuit Ecology Project, who coordinates the working group and sits on the steering committee, told EarthBeat he is "encouraged by all the wonderful work that's going on around the world."

Like other sectors, the university working group will spend the coming months gathering resources and examples of actions from around the world that fit each of the goals. Separate pages on the main Laudato Si' Action Platform website will house guides for each sector.

The sector-specific groups have played an important role in refining the platform's goals and identifying gaps in its initial blueprints. For instance, several have noted the importance in many institutions of appointing a sustainability officer to lead and coordinate activities.

Worsham is one of three Dayton representatives in the working group, along with sustainability director Rebecca Potter and Marianist Sr. Leanne Jablonski, the scholar for faith and environment at the university's Hanley Sustainability Institute. The three have gathered input from people across campus, and are providing information about steps taken by the school, one of the U.S. church leaders in sustainability, including installation of a five-acre solar prairie.

"I think that people are really hungry at this point for some kind of a guide in how they can start to bring this Laudato Si' to life," Worsham said.

The university working group categorized goals into beginning, mid-range and advanced steps. That's a recognition that schools will be joining the platform with varying levels of work in sustainability and ecological education, and what appears simple in one geographic region may be a significant challenge in another. For example, it is easier to start a recycling program at a U.S. college or parish than in India, where trash management is a major problem, Schuck said.

"The expectations for universities in these different areas have got to be very different," he said.

The working group has devised a step-by-step guide to help a university organize itself and get key leaders on board before it even begins setting goals.

"For any normal university, you'd spend a year just trying to get mobilized and get people interested and get administrative buy-in before you could even get a commitment to start the journey," Schuck said.

The goal, he added, is to avoid comparing universities, but to meet them where they are and encourage them to take the steps most appropriate for them. The expectation is that the emphasis on integral ecology will keep them moving forward through the seven-year process.

In the area of energy use, Worsham sees much "low-hanging fruit" for Catholic facilities, especially in increasing efficiency. He hopes the platform will accelerate such actions, which can save money while also affecting the larger energy market.

"There's a huge footprint that the church has, and I do think that investment on behalf of the church in these renewable energy and energy efficiency technologies will make a substantial impact," he said. 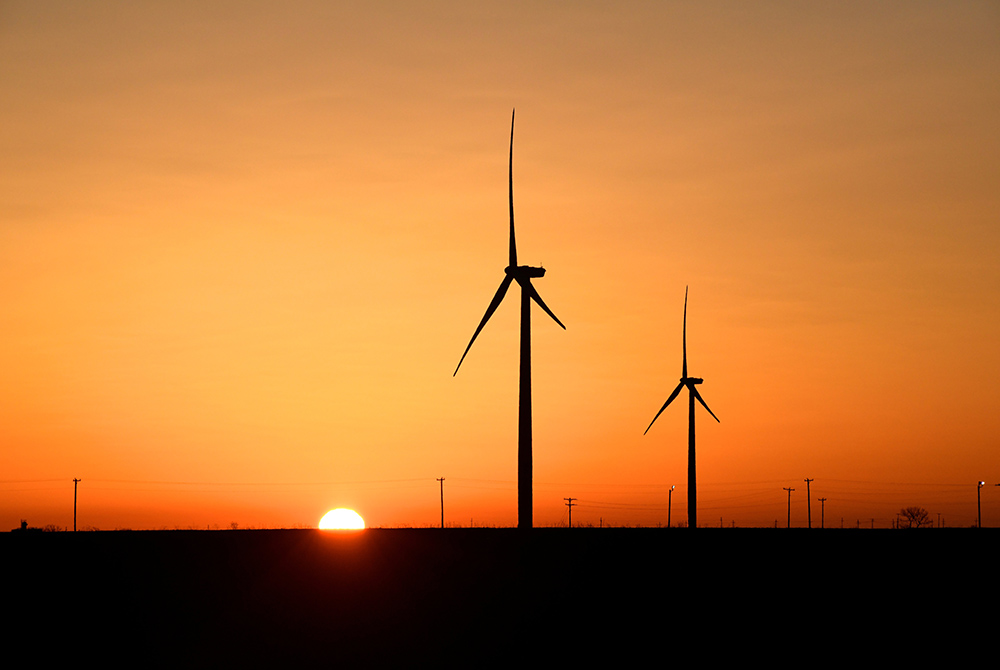 Wind turbines operate at sunrise in the Permian Basin oil and natural gas production area in Big Spring, Texas, Feb. 12, 2019. The message of Pope Francis' encyclical, "Laudato Si', on Care for Our Common Home," continues to be prophetic for a pandemic-hit and post-pandemic world, according to the Vatican office responsible for environmental concerns. (CNS photo/Nick Oxford, Reuters)

Momentum, bishops' backing will be crucial

For all its ambition, the Laudato Si' Action Platform still faces challenges.

One is getting institutions to take part, with the dicastery envisioning the number doubling each year. And once church groups are in the program, maintaining interest and momentum over seven years will be crucial.

It may also be difficult for organizations to know where to start on sustainability. Worsham said one goal of the action platform is to provide that map and help "lower the barrier of entry for organizations of all different sizes."

Artaza-Regan said that making the action platform approachable is especially important for parishes, which might feel overwhelmed at the idea of completing 90 different actions. Her working group has discussed flagging goals as easy, medium or hard, as the Atlanta Archdiocese did in its own Laudato Si' Action Plan.

"Let's start smaller and doable and get it done before everybody goes, 'This is just way too much,' " she said.

And then there's a question familiar to Catholics involved in environmental work: Will bishops be on board?

Artaza-Regan said the bishops' role is crucial not just for parishes and dioceses, but for organizations in all sectors.

"The moment the bishop's office says this is an important ministry of the church, it's usually followed by priests that go, 'Oh, I see my bishop's OK with this,' " she said. "It's got that synergy that diocesan efforts spur parish-based efforts."

Bishops and other church people in the Global South often show greater interest than those in the U.S. in connecting the cry of the Earth and the cry of the poor, partly because they "see these issues day in and day out," she said.

She hopes the platform will help bridge different experiences around the world, helping to bring about an ecological conversion that will lead to more actions by the church.

The goal, she added, is that "at the end of this journey that we can truly say that the global Catholic Church has stepped up and has said that this is an important thing … [and] as a global church, see the global issue, address it locally and help those that don't have the resources to do it themselves."