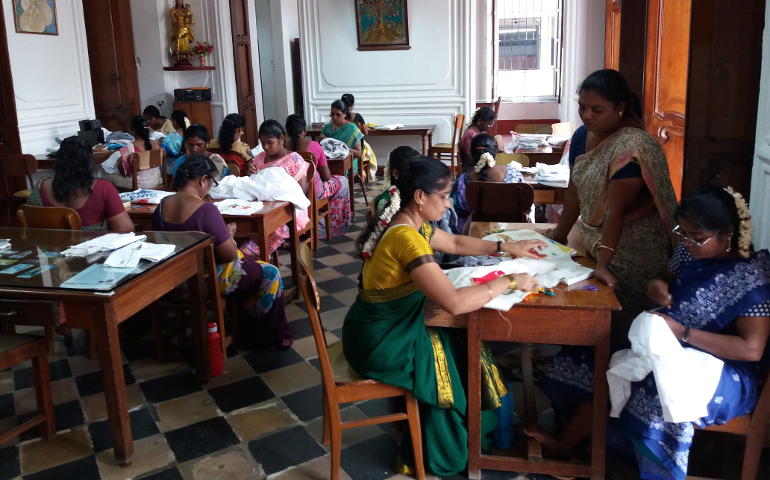 Sr. Irudayam Augusta watches closely as some 40 women move their hands to create exquisite embroidery on clothes in a historic 1774 building.

Augusta, a member of the Sisters of St. Joseph of Cluny, and two of her sister colleagues manage the Cluny Embroidery Centre (or Atelier Broderie, as it is known in French), which has become a tourist attraction in Puducherry, a federally ruled territory that was a French colony in southern India until 1954.

The embroidery, all done by women, is in high demand from Indians and overseas visitors, Augusta told GSR.

Since 1875, the center has catered to single mothers, divorcees, widows and victims of domestic abuse between the ages of 25 and 58.

"We set up the embroidery center to help poor and destitute women earn a living to support their families," said Augusta, 65. Most of the women have no other marketable skills other than hand embroidery, she added.

Augusta took over the center 10 years ago from French Cluny Sr. Theresa Bouchez, who managed it for some 50 years before her death in Puducherry a few years ago. She had trained hundreds of disadvantaged women in Puducherry and neighboring places the art of hand embroidery.

A French woman gifted the historic building to the Cluny sisters in 1845 on the condition that they use it to benefit underprivileged women in and around Puducherry.

The nuns found embroidery was the best craft the women, who are illiterate or uneducated, could pick up fast and earn money.

Augusta estimates that 50 people visit them Monday through Saturday, when the center is open, to watch the women work and buy their products.

"They come to know about our center by word of mouth or from tourist guides," she said.