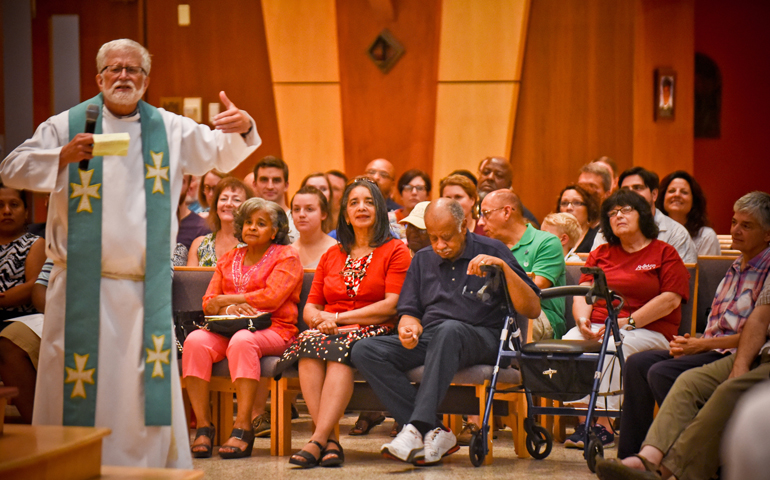 Violence stems from a breakdown in communication, Fr. Bob Stiefvater told more than 450 people gathered at All Saints Church in Milwaukee for a Mass of peace Aug. 18.

Five days earlier, fires raged in an area of the city during unrest following the killing by police of an armed man during a traffic stop.

And people need look only as far as their smartphones and computers to see that breakdown, said Stiefvater, who said after Mass that his homily was inspired by the prisoners with whom he meets regularly.

"We live in a time in which we kind of separate ourselves out, sometimes by where we live, but an awful lot through our electronics," he told the congregation, challenging them to look at their phones and computers to see their last 10 texts, phone calls or emails.

"My guess is they were from people who look like you, who think like you, who live like you, who pray like you," he said of the messages. "We have isolated ourselves and we have lost the power of conversation across these boundaries that we have made throughout our country and in this place and in this city."

Catholics are facing a "holy moment" where they are called to bridge the gaps, he said admitting it will be tough as bridges are walked upon from either side, but "God calls us in our baptism to do this."

"As we respond to God's call to be here today, we have to nuance how we communicate with one another," he said. "We need to go back home and take a look at those texts and phone calls and emails and decide we are going to go beyond the circle and go beyond those who like us or have unliked us and communicate across.

"We at the Archdiocese of Milwaukee have a holy moment in which we are called to bridge the gaps, whether they are real or imagined in our society. We can do this. We are the ones who are called to be bridges," he said.

He urged people to step out of their comfort zones to get to know their neighbors. "We are called to truly be the local presence of Christ through us, our gathering of the church in Milwaukee," said Stiefvater.

Admitting the church and city are hurting, Stiefvater opened the Mass by inviting participants to wash their hands and face in the baptismal font.

As members of the congregation processed to the font splashing water on themselves, the choir sang the words from Psalm 51, "Create in me a clean heart."

It had been five days since the shooting and outpouring of violence in the city, said Stiefvater, referring to the Aug. 13 rioting sparked by the fatal shooting of 23-year-old Sylville Smith by a Milwaukee police officer.

Two evenings of rioting and protesting followed in the Sherman Park area of Milwaukee, when protesters burned six businesses causing damage expected to exceed several million dollars, according to the federal Bureau of Alcohol, Tobacco, Firearms and Explosive as reported by the Milwaukee Journal Sentinel, Aug. 17.

"These five days have been for us a 'holy ground.' God present even in those fires, even in that the anger. even in that chaos," he said, adding this is a holy time for us and God has called you to be here.

Shortly before the closing prayer, Kitzke reminded the gathering they must springboard from prayer to action.

"Let's put our hearts and our heads and our minds together that we can. Thanks be to God for the rich tradition in social teaching our church has given to us. Now, everyone, let's get to work," he said.

Massgoer Reine Assana, a member of Blessed Savior Parish in Milwaukee, was anxious to see that action begin.

"Action after prayer. Let's get into action, because this community is really hurting and we need to find ways to bring it together," Assana told the Catholic Herald, a publication that serves the Catholic community in southeastern Wisconsin.