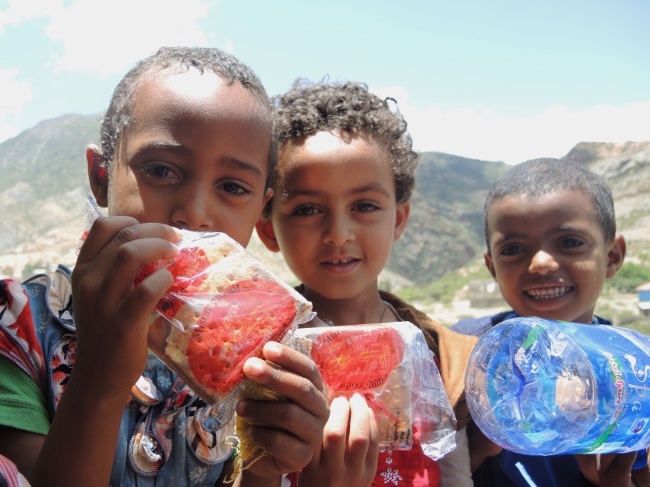 Unlike the horrifying images that garnered world attention during Ethiopia's infamous drought from 1983 to 1985, most of the 10 million people directly affected by the current drought don't look like they are on the brink of starvation for one simple reason: They aren't.

"We have avoided a major catastrophe because of major accomplishments that Ethiopia has been able to do," said Choice Okoro, the head of the Strategic Communications Unit for the United Nations Office for the Coordination of Humanitarian Affairs in Ethiopia. "These national systems are behind Ethiopia's success -- these are the backbones of the response of the current drought," Okoro said, crediting government programs for the free flow of international aid.

The drought has affected most of the country, imperiling crops in six of the country's eight administrative regions, in addition to other countries such as Zimbabwe, South Africa, Sudan and South Sudan, and some parts of Kenya and Uganda.

The Catholic church is deeply involved with drought relief in Ethiopia and across Africa, although Catholics make up less than 1 percent of Ethiopia's population.

In December 2015, the government, in cooperation with international aid agencies like the United Nations and Catholic Relief Services, estimated that more than 10 million people, 10 percent of the population, were in need of food assistance, and 400,000 children were severely malnourished. The cost of providing immediate drought relief, they said, is $1.2 billion, revised to $1.4 billion in May.

Catholic Relief Services is at the head of a conglomerate of international aid organizations providing food to 2.8 million people, about a quarter of the people affected by the drought. The Catholic Near East Welfare Agency is providing drought assistance to about 8,000 people.

The words "Ethiopian famine" immediately bring to mind images of gaunt children, desperately trying to get food during a 1983-85 drought that captured world headlines. Those pictures, broadcast around the world, spurred international outcry and Bob Geldof's 1985 Live Aid concerts.

At the time, Ethiopia was mired in a civil war under the Derg military regime, and the severe drought exacerbated by the political climate was a disastrous combination. More than 500,000 people died.

"In 1984-85, the worst part of the drought was not the drought itself, but the displacement of people," said Hagos Medhin, the CRS field office manager in Mekelle, the capital of Tigray Region. "[This was] because the government did not allow the food to reach the towns, and the fighters in the villages didn't allow the distribution of food," Medhin said, explaining that one segment of the villagers migrated to Sudan with the fighters while others moved to towns and were placed in camps. "In the camps, there were diseases like cholera and typhoid, and that was the reason for death," he said.

Conditions are different this time around. "This time, the drought is more severe than 1984," he said. Geographically it's wider and it's more severe, but people are getting support in their localities. That is really critical."

Okoro pointed to major gains in health infrastructure, with the presence of a clinic in every "woreda," or local district. When aid groups wanted to do community education about malnutrition issues, the health workers were already perfectly placed locally to carry out this work.

"Drought is going to be a recurrent problem, and Ethiopia is not the only country dealing with drought," she said. "But 1984 won't happen again."

Ethiopia is a majority agrarian country, with 85 percent of the population working as farmers or pastoralists. They are completely dependent on two rainy seasons, the short rains in March and April and the long rains that fall from late June to early September. Droughts are common, but, with climate change over the past decade, the droughts have become much more frequent.

"In the past it was one big drought every 10 years. Then it came to one drought every five years, and now the trends are showing that it will be one every three to five years," Beatrice Mwangi, the resilience and livelihoods director of World Vision's Southern Africa region, told the Guardian in March.

"So we are in a crisis all right, that is true. But it's going to be the new norm. So our responses need to appreciate that ... there is climate change, and it's going to affect the people that we work with, the communities we serve."

The three failed rains were compounded by the presence of El Niño's disruptive weather patterns, making this one of the worst droughts in recent history.

In Ethiopia, there are planned food distribution centers in every region, to be ready within the country's diverse and isolated geography, Medhin explained. "With consecutive drought seasons ... the response activities are upscaled," he said. "In a better year, you use it as development support – the 'food for work.' "

Ethiopian public work projects in rural areas are usually Productive Safety Net Programme projects, run by the Ethiopian government and the World Food Programme. More than 8 million people participating in the program receive wheat, vegetable oil or yellow split peas in exchange for their work on projects such as building roads, dams or terraces to combat soil erosion in mountain areas. These food distribution centers operate year-round, so when drought happens, the infrastructure is already in place to distribute food.

Many schools give out high-energy biscuits, even during non-drought periods, fortified with vitamins and minerals; typical rural diets sometimes lack the balance of nutrients found in meat and vegetables.

"This is one of the hot spots of this El Niño drought," said Bishop Tesfaselassie Medhin (no relation to Hagos Medhin) who oversees the Adigrat eparchy (diocese) in the region. According to CRS, there are 600,000 to 700,000 people in Tigray receiving drought-related food assistance. Other hard-hit areas of Ethiopia include Somali and Afar regions. "In some regions, they were driving [water] tankards, and people were waiting for hours to fill up their bottles," the bishop said.

"[The drought] affects the young people to flee from their pasturelands to migrate," he said. Tigray Region, on the border with Eritrea and Sudan, is a major human trafficking spot in Ethiopia. Many young people smuggle themselves out illegally to migrate to Europe or the Persian Gulf.

Catholic schools in the area already provide food assistance to their students, a practice they have continued as the drought ravages crops.

"Most people use the natural rains for seasonal harvest, so if you don't get this harvest – bekaa!" said Sr. Letteselassie Alemayohu, the Filippini regional superior for Tigray, using a Tigrinya phrase that means, "that's it, no more."

"Most of our people are farmers," Alemayohu continued. "To farm, they don't have modern machinery, it's oxen. So if the oxen aren't fed, they can't work. So they are feeding two mouths -- the people and the oxen."

"In South Tigray, many animals died," she added. "People struggled, but not many people died."

The drought relief has not been perfect. Although the transportation infrastructure has been much improved in the last three decades, hundreds of isolated villages are scattered in the folds of the mountains, so many children's needs are not met.

Even if a family has enough food, members may be forced to travel long distances to reach water sources, such as trucked-in water tanks or temporary water pits made with plastic tarps. Due to the extra hours it takes to retrieve water, children are sometimes forced to drop out of school. When the rains return and water becomes more readily available, the children may return to school. Many will not, once they have gotten into a routine of agricultural work.

The International Monetary Fund estimates that, as a result of the drought, Ethiopia's economy will grow by just 4.5 percent, as opposed to the predicted 8 percent.

When it rains, it pours

In early May, fortunes changed as the sky opened for the first time in 18 months. "It used to be a few weeks ago no one had water, even for the animals," said Alemayohu. "Now in the past week everything is green! How quickly it changes," she said.

Although the short rains came later than usual, in May instead of March, there is still enough time for people to plant teff, Ethiopia's ubiquitous iron-rich grain used to make injera, a spongey  flatbread eaten at most meals. If the rains continue in the summer months, people will still be able to have a good harvest in the fall, Alemayohu said.

Throughout the countryside, new green shoots clawed their way out of the parched earth, a green so bright it almost hurt to look at it directly.

Ethiopia is now dealing with the aftereffects of drought: flooding. Torrential downpours often follow droughts, but the desiccated, dry land cannot absorb such large quantities of water all at once, leading to flash floods.

"Now with the heavy rains, especially in South Tigray, it's low and flat, so when the rains come, if they're in their fields they don't even have time to get out of the way. Everything is swept away and people die," Alemayohu said.

Since the beginning of the rains, the U.N. has tracked 15 deaths from mudslides and 30 deaths from flooding. Okoro said flash floods have displaced about 120,000 people in the southeastern and central parts of the country, and 200,000 more are in flood-risk areas and may also be forced out.

Although aid workers on the ground stress that the current drought-induced catastrophe has been avoided, international media coverage this spring often took on an hysterical tone, as in this New Zealand news report featuring a reporter awkwardly weaving through women waiting for food relief. Part of that is because smaller organizations that rely on donations know the phrase "Ethiopian famine" can get Western donors to open their wallets, so they want to show donors the most desperate cases.

But long-term aid workers know that the key to continued drought relief is not begging the international community for assistance when drought hits. Rather, the emphasis must be placed on local development that will lift families out of precarious poverty, the same poverty that makes them vulnerable to droughts in the first place.

Some international economists accuse the food aid of actually crippling a country's economy, by driving down prices and making competition difficult for local farmers.

To encourage local development, CRS and other aid organizations promote Savings Internal Lending Communities, where a small group of community members are trained to create their own savings groups to offer business loans to each other.

"Women [in these programs] are not just surviving, they're able to buy livestock when everyone else is selling for a low price," said Kim Pozniak, the communications director for CRS who visited Ethiopia in April. "They have been able to start small businesses, like some women formed a cooperative to create and sell a fuel-efficient stove. Their kids are in school and they are doing considerably better."

Other CRS sustainability programs include training women who head households in goat and sheep rearing, bee-keeping to sell honey and to promote pollination of crops, and building water projects or irrigation infrastructure.

"There's good news emerging from a crisis like this," said Okoro, pointing out that some communities have come together to start large water projects such as dams or water storage facilities. They are spurred by the current situation to protect themselves against future droughts. "Communities want to go back to their livelihoods, they don't want aid," she said.

"This is a country of resilient and empowered people," Okoro said. "The first responders are your neighbors. These practices have been built through history to respond to calamities like this."