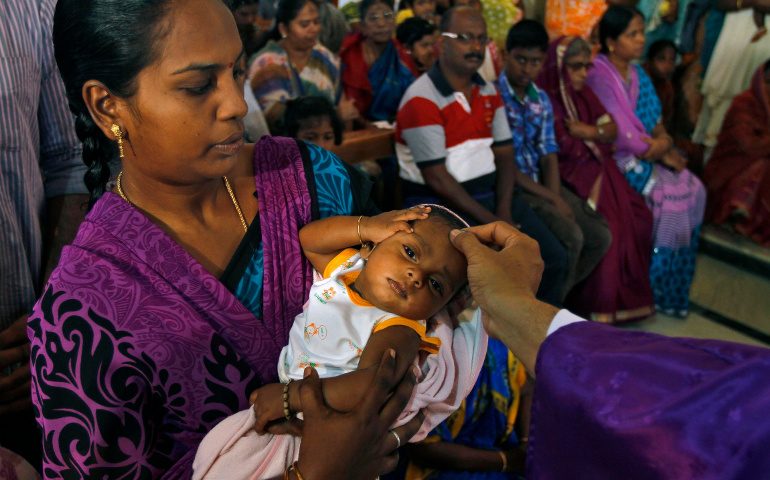 A priest uses ashes to mark a cross on the forehead of a baby during Ash Wednesday Mass at a church in Chennai, India, in 2014. (CNS/Babu, Reuters)

The head of India's Catholic bishops' conference said he thinks Pope Francis may not be able to visit his country as planned at the end of 2017.

Bombay Cardinal Oswald Gracias said that while he is optimistic the pope will visit India at some point in the future, discussions with Prime Minister Narendra Modi's government about a visit this year have taken longer than expected.

"I am beginning to lose hope about 2017," the cardinal said in an interview with NCR June 15.

"We are already in June," said Gracias. "Even if suddenly they said, 'Come,' it is a pastoral visit ... [and] will take several months for the dioceses to prepare the people."

"It should not just be a flash in the pan, he comes and goes," he continued, explaining that for Pope John Paul II's visit to the country in 1999, the Indian bishops "planned for almost a year before he came to make it effective."

Gracias, who was in Rome for a meeting of the Council of Cardinals on which he serves, spoke during an interview at the Vatican's Casa Santa Marta​.

The half-hour conversation touched on a wide range of other topics including the Council of Cardinals' desire to ensure lay people are consulted on bishops' appointments and Gracias' hope that the Vatican will decentralize more authority to local bishops.

Francis first announced his intent to visit India in October 2016, saying in a press conference he was "quasi-sure" he would visit the country along with Bangladesh in 2017. Vatican officials are known to have been working on a visit for November or December, when temperatures in the region are normally coolest.

Should the India visit be postponed it would be the second expected papal visit for 2017 to be delayed, following the Vatican's announcement May 30 that Francis will be unable to visit South Sudan this October as previously planned.

Gracias said that working with the Indian government to prepare the papal visit has been "a little bit of a difficult situation" as Modi's calendar has been filled up with state visits from other leaders.

"We have to find a good spot where we can give the Holy Father his due importance and respect," he said.