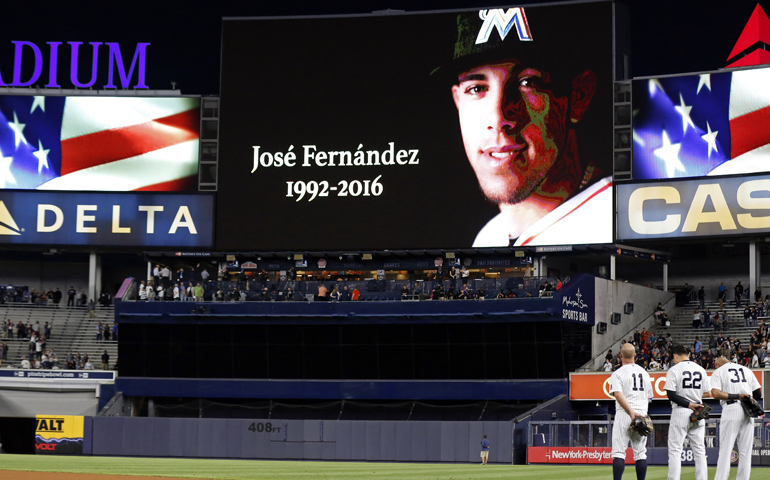 A moment of silence is observed for Miami Marlins José Fernández prior to the New York Yankees taking on the Boston Red Sox Sept. 27 at Yankee Stadium.

South Florida's Cuban-American Catholic community and other Miami Marlins baseball fans planned to honor José Fernández with prayers at the Cuban shrine and a public parade Sept. 28, a day before his private funeral.

Fernández, a pitcher and popular Cuban-American member of the Marlins team, died Sept. 25 following a tragic boating accident that also took the lives of several of his companions. They were on a late-night outing when their craft struck a jetty near Miami Beach.

With fans set to gather at the West Plaza at Marlins Park, organizers said the Sept. 28 procession would depart at 2:16 p.m. local time -- "16" was Fernández's uniform number -- and then move on to the National Shrine of Our Lady of Charity near Miami's Biscayne Bay and not far from the accident.

The procession was then to proceed to St. Brendan Catholic Church in Miami where a public visitation was scheduled for 5 p.m. to 11 p.m. A private funeral for Fernandez was to be held Sept. 29.

Fr. Juan Rumin Dominguez, rector of Our Lady of Charity shrine, described Fernández as "the young face of the Cuban diaspora."

"This is a young man who is a source of pride for us Cubans, an example for our community and especially for Cuban young people," said Dominguez.

"He was able to reach the highest goals. That's why he's an example to our Cuban young people," the priest said. "He demonstrated that with dedication and effort, you can achieve the highest goals in this country."

Other clergy throughout the region reportedly referred to the tragedy in their homilies and offered prayers for Fernández Sept. 25.

Fernández, 24, and two other men were killed early that Sunday when his 32-foot SeaVee boat slammed into a rock jetty that extends off the southern tip of Miami Beach.

The Florida Fish and Wildlife Conservation Commission continues to investigate the crash. The Miami-Dade County medical examiner has not yet released toxicology results.

Fans established a makeshift memorial on the plaza outside the ballpark entrance, leaving dozens of flower arrangements -- daisies, carnations, roses and lilies, the result as colorful as Fernandez's personality. There also were candles, and messages scrawled on balls, balloons, photos and jerseys.

A spokeswoman for American Social Bar & Restaurant in Miami reportedly confirmed Sept. 27 to news media that Fernández was a patron at the establishment before the crash. The bar is along the Miami River and allows boats to dock alongside.

Emilio Macias, 27, and Eduardo Rivero, 25, also died in the accident.

Since the tragedy, the Marlins have been grieving while also returning to playing games. In evening game Sept. 26, they defeated the Mets in an emotional and tearful game.

"I think the routine of the game is really good for you," manager Don Mattingly said in a news release posted on the Marlins website. "You've been doing this almost the whole season. Yeah, we feel it's almost like autopilot, fielding ground balls, take at-bats. It's almost mindless. So it does good to be on the field. It feels good to prepare for a game."

[Contributing to this story was Ana Rodriguez-Soto.]