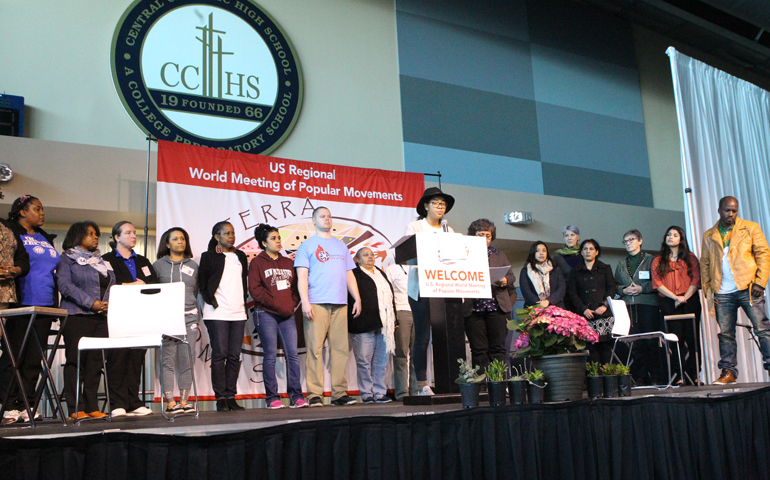 Representatives from small groups give the final message from the U.S. Regional World Meeting of Popular Movements Feb. 19 in Modesto, Calif. (CNS/Dennis Sadowski)

In recent weeks, Karina Melendez has heard the rumors in her hometown of Chico, Calif., of immigration officials knocking on doors and asking to see immigration papers. As the daughter of migrant farmworkers, the anxiety is real, personal.

During the second night of the U.S. regional meeting of the World Meeting of Popular Movements, one woman's story of her struggles as a migrant worker in California's Central Valley intimately resonated with Melendez, a senior at California State University-Chico: "It got my heart because my family is going through that."

She was not alone.

Throughout the four-day gathering (Feb. 16-19) of secular and faith-based grassroots organizers and social justice advocates, the fears and tensions felt by immigrants — Latino and otherwise — lacking legal documentation in attendance and in others' communities was palpable. Headphones offered a translation of speakers' words, but were unessential to comprehend the raw emotions they expressed as the human face of an issue acutely impacting their lives.

During a migration panel Feb. 17, Los Angeles Archbishop José Gomez shared how a parish in El Monte, after hearing recently a rumor of immigration raids at a nearby supermarket, cancelled all parish activities, fearing parishioners en route may stop there and be picked up. Children in their Catholic schools, he said, face the terror of coming home to find their parents deported.

"You can see how afraid people are," he said Feb. 18 during a panel on migration. He said L.A. is home to about 1 million undocumented persons, which combined with New York City, represent one-fifth of all persons without immigration documents in the country. "No matter if they have broken our immigration laws, they are still human beings and they still have dignity and human rights."

The sentiment steered the organizers to lead their final statement with a call for all faith communities, including every Catholic parish in the United States, to declare themselves sanctuaries not only for those facing deportation but anyone targeted for their race, religion or political beliefs.

"Our faith leaders and congregations are called to stand with those whose backs are against the wall. We will be remembered not just by the empathy we express but by the actions we take," the message read.

The regional World Meeting of Popular Movements brought together nearly 700 community organizers. It was co-sponsored by the Vatican Dicastery for Integral Human Development, the U.S. bishops' conference Catholic Campaign for Human Development, and the PICO National Network of faith-based organizers. The U.S. meeting added to the central themes of land, housing and work, two nationally relevant issues of racism and immigration.

The message from the protagonistas — a term Pope Francis has used for the popular movements — deemed raids and President Donald Trump's executive orders on immigration and refugees as "scapegoating immigrants and ripping families apart."

A Pew Research poll released Feb. 23 showed nearly half of U.S. Latinos worried that they or someone they know could be deported. For foreign-born, lawful permanent residents, the anxiety increased to two-in-three.

Early on at the regional popular movements meeting, news broke of the possibility that the National Guard would be used in mass deportation efforts. (The Trump administration has since said mass deportations or military use will not occur.) A day after the meeting concluded, the Department of Homeland Security issued new policies to enforce immigration laws, including a surge in more border agents and other personnel to "repatriate illegal immigrants swiftly."

The grassroots leaders provided a variety of recommendations for faith communities to make themselves sanctuaries: host families at risk of deportation, accompany people to ICE check-ins, organize rapid response teams when an ICE agent arrives as well as efforts to free people from detention, and train and educate people about their rights and how to defend them.

Gomez said the L.A. archdiocese actively prepared parish teams to train individuals about their rights as immigrants and how to respond if stopped by authorities. He called for support of the Bridge Act in Congress to protect Dreamers, immigrants without legal documents brought to the U.S. as children, and a California bill to create safe zones. He added he has personally made calls for months for an end to deportations until immigration reform is addressed — noting that while the tone has turned crueler under Trump, more than 2.4 million people were deported under President Barack Obama.

"A policy of enforcement only without reform of the underlying system will only lead to a human rights nightmare. And that's what we have right now," he said, adding they need to study the farmworkers and civil rights movements under Cesar Chavez and Martin Luther King Jr., respectively.

The community organizers' letter pointed back to the pope's letter to them, where he called on them to answer the question "Who is my neighbor?" by becoming Samaritans, but also to become like the innkeeper at the end of Jesus' parable:

"Who is this innkeeper? It is the Church, the Christian community, people of compassion and solidarity, social organizations. It is us, it is you, to whom the Lord Jesus daily entrusts those who are afflicted in body and spirit, so that we can continue pouring out all of his immeasurable mercy and salvation upon them."

The statement offered the regionally, racially and culturally diverse groups a moment to reflect on the conversations and encounters they had during the previous three days, but also to look forward, and to consider how to channel and carry the energy of the meeting into real actions in their communities and the country.

The sanctuary proposal was one of the eight actions they posed for themselves and their supporters in the faith community. They also pledged to unite as one people in one fight to break down divisive walls and "to rebuild a society in which every person is seen as fully human." Other requested actions were:

A final action recommendation was directed squarely to the faith community: a call for bold, prophetic leadership.

"At this moment of fear and anxiety, we urge our clergy and faith communities to speak and act boldly in solidarity with our people. … We ask our Catholic Bishops to write a covenant that spells out specific actions that dioceses and parishes should take to protect families in the areas of immigration, racism, jobs, housing, and the environment," they said.

But it was on immigration the call for solidarity rang loudest.

After Gomez's speech, Andrea Cristina Mercado of the National Domestic Workers Alliance said while it was good to hear of actions in L.A., "We do not hear the Catholic church speaking loudly and clearly where I'm from [southern Florida], or in Texas, or in Alabama, or in Georgia, or in Arizona." She said she believed in the power of prayer but that prayers were not enough.

Joseph McKellar, deputy director of PICO California, said the current situation regarding immigration represents an "existential threat" not just to those communities but to the church itself. He commended the bishops for the various statements they have issued opposing Trump's executive orders, but added "it's simply not enough."

"What if bishops were to say, take me first, not my immigrants? If you're going to deport someone, deport me. That's the kind of radical solidarity that I think the people in this room are prepared to step into, and we're asking our bishops, given their level of influence and power, to do the same," he said.

"Jesus Christ was a radical … he was the first one on the line, he took risks, and I'm going to follow in his steps," added Gladys Gutierrez, a low-wage and immigration organizer in Minnesota and a junior at the College of St. Benedict and St. John's University in Collegeville, Minn.

"If there is an ICE truck full of innocent, undocumented people, I will stand in front of that truck … and I expect my bishops and my priests to be doing the same," she said.

Throughout the popular movements meeting, several warm receptions greeted those among the nearly two dozen Catholic bishops, as well as leaders in other faith denominations, who staked out stances firmly beside the immigrant and their advocates.

"What would really be disruptive is if we would declare our parish a sanctuary church," said Philadelphia Auxilary Bishop Edward Deliman to an approving roar from the audience Feb. 18, channeling the language from fellow bishop Robert McElroy's speech earlier in the day. "And if that would spread, and every parish in the diocese would do the same, we would certainly do what Jesus would want us to do."

Juan Grabois, the Argentine co-founder of the World Meeting of Popular Movements, said that Francis had provided a concrete example of sanctuary for other parishes to follow by housing refugee families in Vatican parishes and asking others around the world to do the same.

In his closing comments, Cardinal Peter Turkson, who mingled, chatted and posed for countless selfies with participants throughout the gathering, reminded the organizers the event was theirs, not the church's, and that the church was there to accompany them in their response to societal challenges.

"We come to express solidarity with humanity in its walk and search for the basic human virtues, which makes the life of all of us dignified," said Turkson, the prefect of the integral human development dicastery.

Using the metaphor of the church as an iceberg, Grabois echoed that it's up to the people of God, the larger portion of the glacier unseen beneath the water, to help guide the hierarchy — the iceberg's visible peak — in its work. Gordon Whitman, PICO co-deputy director, said that as more people have felt vulnerable, they are seeing a set of U.S. bishops "step into a different kind of leadership" and who warrant additional attention.

In a video message Feb. 17, Newark, N.J., Cardinal Joseph Tobin characterized the organizers' role as to create strong networks and to call on the church to walk with them in their journey for structural changes. But it is the church, through bishops, clergy and religious, he added, that must at times "even walk out in front of you, to show that we are not afraid."

In early February, 100-plus New Jersey faith leaders circled an immigration court building in Newark to support Catalino Guerrero, an immigrant who has lived in the U.S. 25 years, as he met with ICE officials about possible deportation. Guerrero, 60, emerged from the courthouse but was told to come back March 10.

"We're going to face these very clear moral showdowns. And this is happening all around the country," Whitman said.

A version of this story appeared in the March 10-23, 2017 print issue under the headline: Meeting rallies to 'stand with those whose backs are against the wall'.