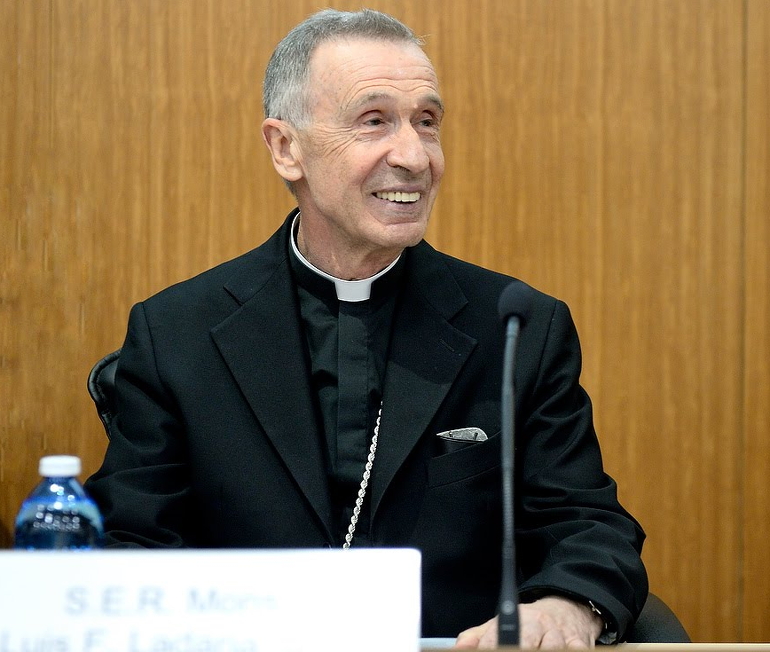 Archbishop Luis Ladaria is seen speaking at a conference in 2015. (Photo courtesy of the Pontifical Gregorian University)

Pope Francis has decided not to renew the expiring term of Vatican doctrinal chief Cardinal Gerhard Muller, choosing instead to replace the German prelate with his deputy, a Spanish Jesuit theologian known for keeping a relatively low public profile.

The pontiff has appointed Archbishop Luis Ladaria, 73, as the new prefect for the Congregation for the Doctrine of the Faith. He had previously served as the office's secretary.

A Vatican statement announcing the appointment Saturday did not say whether Muller would be receiving a new role. At 69 years old he is six years away from the traditional retirement age for bishops. It is unusual for a cardinal of that age not to have an official posting.

The Vatican statement simply said the pope thanked Muller for his service at the conclusion of his five-year term as prefect, which began with his appointment by former Pope Benedict XVI on July 2, 2012.

Saturday's announcement had been highly anticipated over the past day, as rumors began to circulate that Muller would be leaving his position following a meeting the cardinal had Friday with Francis.

The pope's choice of Ladaria, who has served at the doctrinal congregation since his own appointment by Benedict in 2008, seems to signify that Francis did not want a radical shake-up at the Vatican office, but simply a change in personnel.

Prior to his appointment at the Vatican, Ladaria had taught at the Pontifical Gregorian University and served as its vice-rector. From 2004-2009 he was the secretary general of the International Theological Commission.

The archbishop is also the president of the new papal commission studying the possibility of women deacons in the church, having been appointed to that role by Francis last August.

Before becoming the head of the doctrinal congregation, Muller had served for ten years as the bishop of the southeastern German diocese of Regensburg. He is known to be close to Benedict, who studied and taught at the University of Regensburg prior to becoming a bishop.

But Muller and Francis never appeared to develop an especially warm relationship. Most recently, the cardinal has been inconsistent about his position regarding the teaching authority of Francis' exhortation on family life, Amoris Laetitia ("The Joy of Love.")

After four cardinals publicly challenged Francis last November to answer questions about what they see as inconsistencies in the document, Muller said in January that the exhortation was "very clear" and that cardinals should not challenge the pope publicly.

But the cardinal appeared to contradict Francis' teaching in the document in a May interview with EWTN. Asked about the possibility of the church giving Communion to those who have remarried without first receiving annulments, the cardinal stated: "We don't accept polygamy."

In Amoris Laetitia Francis asked pastors to use pastoral discernment in such cases and said that in some instances such discernment "can include the help of the sacraments." The pope has also praised a set of guidelines issued by Argentine bishops that said divorced and civilly remarried couples might eventually be allowed to receive Communion.

Muller was also publicly questioned in recent months over his willingness to implement recommendations of the new papal commission on clergy sexual abuse, even in instances when Francis had approved them.

When Irish abuse survivor Marie Collins resigned March 1 from the Pontifical Commission for the Protection of Minors, she noted in a statement to NCR that Francis' order for the creation of a new Vatican tribunal to judge bishops who mishandled abuse cases was found by Muller's congregation to have "legal" difficulties and was never created.

Collins also noted that an order approved by Francis requiring all Vatican offices to respond to letters from abuse victims was not implemented by at least one congregation.

In a March 5 interview, Muller appeared to admit that his congregation was among those that ignored that papal order, saying that if the Vatican responded to victims' letters it would not respect the role of diocesan bishops in such matters.

Muller also appears not to agree with Francis' decision to create the commission studying the possibility of women deacons. He said in the May EWTN interview that it is "not possible" for women to be ordained to the diaconate and that female deacons "will not come."

Francis made Muller a cardinal in February 2014, as part of the first group of 19 cardinals appointed by the then-new pontiff.

The doctrinal congregation is tasked with promoting correct interpretations of Catholic doctrine and theology. The office also handles investigations of clergy accused of abusing minors.

The archbishop graduated from the University of Madrid with a degree in civil law. He earned a doctorate in theology at the Gregorian with a dissertation on "The Holy Spirit in St. Hillary of Poitiers."

Ladaria is the sixth prefect of the doctrinal office since the end of the Second Vatican Council in 1965. Besides Muller, he follows Cardinals Afredo Ottaviani, Franjo Seper, Joseph Ratzinger (future pope Benedict), and William Levada.

Muller's tenure as prefect is the shortest of that group. U.S. Cardinal Levada's is the next shortest, with him having served seven years in the role. Croatian Cardinal Seper, with 13 years, and Ratzinger, with nearly 24, served the longest terms.

John Paul II replaced Seper as prefect in 1981, three years after he had been elected as pontiff in 1978. But Seper had turned 75 at that point and would die the month following his replacement.

Ladaria's appointment immediately appears as one of Francis' most significant among the Vatican's highest-level roles since his election as pontiff in March 2013.

In terms of the city-state's most prominent offices, the pope has only appointed two other such leaders: Italian Cardinal Pietro Parolin as Secretary of State and Guinean Cardinal Robert Sarah as the prefect for the Congregation of Divine Worship and the Discipline of the Sacraments.

A version of this story appeared in the July 14-27, 2017 print issue under the headline: Ladaria to replace Muller as head of doctrinal congregation.