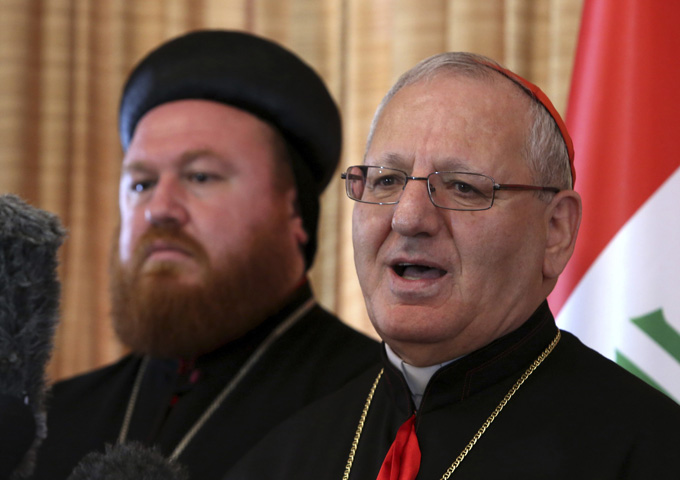 One of the main leaders of the Christian community in Iraq has called for deployment of international ground forces in the region to fight the so-called Islamic State group, telling a symposium at a pontifical university here that airstrikes will not be enough to defeat the terrorist group.

Archbishop Louis Raphaël I Sako, the head of the Chaldean Catholic church, said the Islamic State group and Islamic fundamentalism "pose a real threat to all."

"Therefore, we all together must destroy it militarily, with troops," said Sako, who is also known as the patriarch of Babylon. "We need troops on the ground. With bombing, there will be no solution."

Sako, whose see is based in Baghdad, was speaking Thursday at an international conference on global Christian persecution being held at the Pontifical Urbaniana University through Saturday.

Titled "Under Caesar's Sword," the conference is being cosponsored by centers at the University of Notre Dame and Georgetown University and is featuring several talks by Christian leaders of communities facing persecution.

Sako, whose community is estimated to number about half a million, told the conference that "the situation of Christians in several countries of the Middle East is degrading."

"Executing Christians has today become a phenomenon," he said, before outlining several reasons he attributed to the cause of the problem.

"Dictatorship is a culture in the Middle East, so what we need is a fair dictator," he said. "If we want to change the mentality for democracy or freedom, we need another culture, we need time and many efforts."

The patriarch also called on Islamic religious authorities to take "full responsibility" for the rise of Islamic fundamentalism in the Middle East and to provide moderate programs of religious education that seek to spread a "culture of harmonious social coexistence."

"We Christians assert our attachment to our country, our homeland, and we respect and love our Muslim brothers," said Sako. "But, similarly, we want them to do the same thing for us."

Also speaking at the conference Thursday was Archbishop Ignatius Joseph III Younan, the leader of the Syriac Catholic church, who is Syrian but is based now in Lebanon.

Younan, who is also known as the patriarch of Antioch and all the East of the Syrians, said bluntly: "The whole Middle East is, without exception, engulfed by a nightmare that seems to have no end and that undermines the very existence of Christians."

He also bluntly criticized the U.S.-led invasion of Iraq in 2003, saying it led to "horrendous results" and had a drastic impact on the lives of Christians in the Middle East.

One problem facing Christians in the region now, Younan said, is to convince young people to stay even in the face of persecution. "How can they give hope to their children?" he asked.

"Christians in Iraq and Syria are not seeking privileges, or special treatment," he said, adding that "they want, however, to claim equality of citizenship" and freedom to worship and of conscience.

"Middle Eastern Christians have been forgotten, abandoned, even betrayed by the Western countries," said Younan. But he said "we still have confidence because of brothers and sisters like you who keep praying and trying to stand up to help us."

"We need you to stand up for the human rights of all that we can still witness to our Christian vocation in the Middle East, working for justice and truth in love and being makers of peace," said the patriarch.

The Vatican's Archbishop Paul Gallagher also spoke to the conference Thursday, calling on Catholics around the world to listen to the stories of Christian persecution so they can better express solidarity with their struggles.

Reflecting on a 1988 speech by then-Pope John Paul II about the Second Vatican Council document on religious freedom, Gallagher mentioned how the pontiff spoke of the church exercising an "apostolate of human rights."

"The Holy See, through its diplomatic action in the international community, is committed to this apostolate of human rights," said the archbishop. "And it seeks -- through political, cultural, and inter-religious dialogue -- the promotion and respect for all human rights that are founded on the inherent dignity of the human person."