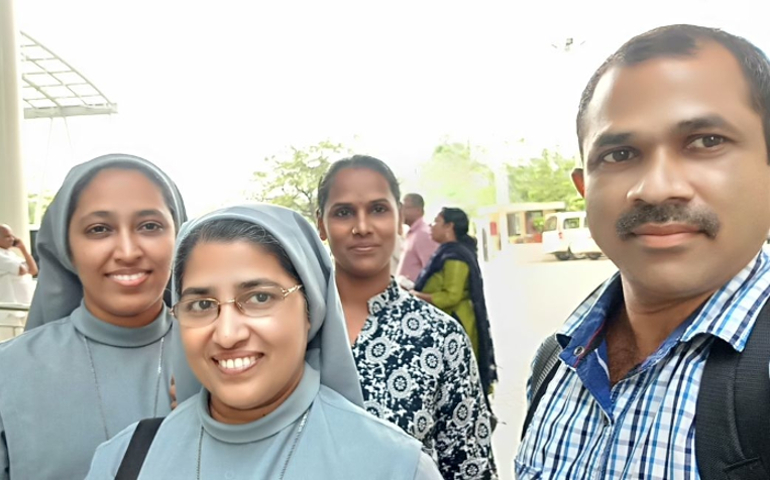 Sr. Rose Anto says she was not frightened when she was taken inside the operating room in January to have one of her kidneys removed. Anto was celebrating her silver jubilee year of being a nun by tendering a lifesaving gift to a Hindu man, who was unlikely to have hope of survival otherwise.

A few hours after the successful surgery at Kochi, in the southern Indian state of Kerala, Anto was cheerful and thankful to God for making her 25-year dream come true.

"God gave me an opportunity to donate my kidney, in my jubilee year of sisterhood, to a person who needed it most," she told GSR.

A team of doctors on Jan. 19 removed one of her kidneys and transplanted it into Thilakan Velayudhan, 47, whose kidneys were in the late stage of disease.

Velayudhan completed his mandatory rest in April and left Kochi to return to his hometown of Irinjalakuda in Kerala. Velayudhan, who is a bicycle mechanic, says, "Sister was sent by God as an angel to save my life." He wants to resume work after he recuperates and begin to lead a normal life, free of the weight of regular dialysis treatments.

His wife, Saritha Velayudhan, told GSR from Kochi by phone that, without the sister's mercy and kindness, her husband wouldn't have been alive today. "We are deeply indebted to the sister."

Dr. Malini Thomas, a pathologist and former principal of the Government Medical College, Kozhikode, in Kerala, says that healthy human beings have two kidneys, but a normal life is possible even if they have only one functioning kidney.

For the last 25 years, Anto has been waiting to donate one of her kidneys to a person who was unable to find a donor or to afford the costly surgery.