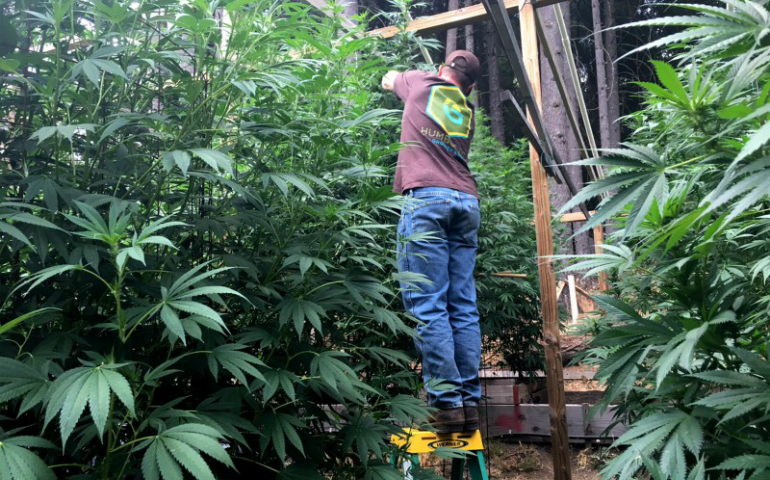 A man tends to his marijuana plants in late August on his farm in Humboldt County, Calif. (CNS photo/Rory Carroll, Reuters)

"The cost in lives is unacceptable. The parallels with other substances like tobacco are too striking. And the impact on our young people too uncertain," said Archbishop Salvatore J. Cordileone of San Francisco in urging voters to reject Proposition 64 to allow recreational marijuana.

"The effects are not fully understood and the proposed standards are arbitrary," he said in a statement and in a column in Catholic San Francisco, the archdiocesan newspaper. "Legalization of marijuana in California will have to be followed with years, if not decades, of education in temperance in its use, let alone the time needed for exact legal standards, which are currently completely lacking for marijuana, to be put into place."

Initiatives to legalize recreational marijuana go before voters in at least five states — Arizona, California, Maine, Massachusetts and Nevada. Legalizing medical marijuana is on the ballot in Arkansas, Florida, Montana and North Dakota.

Arizona's Proposition 205 "sends a message to children and young people that drug use is socially and morally acceptable. As people of faith, we must speak out against this effort and the damaging effects its passage would have on the children and families of Arizona," the state's Catholic bishops said in a statement released by the Arizona Catholic Conference, their public policy arm.

In Massachusetts, 132 leaders from a number of denominations, including the Catholic Church, signed a statement released Nov. 1 urging voters to reject ballot Question 4 to legalize marijuana in that state.

"In the midst of an opioid epidemic, it is beyond reason that the commonwealth would commercialize the sale of marijuana," the faith leaders said. "It is important for our citizens to know the facts: This legislation was written by and for the billion-dollar marijuana industry."

They said 96 percent of the money being spent to advocate for the proposal is coming from outside of Massachusetts and aimed at being able "to legally sell marijuana that is 10 to 600 times more potent than that of past decades. We believe this will lead to greater addiction particularly for young people."

The Nov. 1 statement echoed an earlier statement issued by Massachusetts' Catholic bishops, who quoted from a report from the National Institute of Drug Abuse, which said marijuana is the most commonly used illicit drug in the United States.

"Its widespread use and abuse, particularly by young people under the age of 18, is steadily increasing while scientific evidence clearly links its long-term damaging effects on brain development," the bishops stated.

"When marijuana users begin using as teenagers, the drug may reduce thinking, memory and learning functions and affects how the brain builds connections between the areas necessary for these functions. Marijuana's effects on these abilities may last a long time or even be permanent," the bishops quoted the National Institute of Drug Abuse as saying.

When Massachusetts and the nation as a whole are currently waging a losing battle against opioid abuse, they said, "our attention must not be diverted from (that) health crisis, nor do we want to add fuel to it by contributing to the use of other illegal/illicit/proscribed substances through the legalization of marijuana."

In California, Cordileone in his statement cited the doubling of traffic fatalities related to recreational use of marijuana in the state of Washington, which legalized cannabis in 2012.

"Increased road fatalities alone should give us pause. Incredibly, California voters are being asked to allow the widespread use of marijuana despite the fact that, unlike alcohol, there is no reliable standard for measuring the effect marijuana has on a driver," Cordileone said.

He pointed to the sharp rise in emergency room visits "primarily among toddlers who consume marijuana edibles" in Colorado, where voters approved legalization in 2012.

"And this spring, right here in San Francisco, 19 people went to the emergency room when they unknowingly ingested marijuana-laced candies during a celebration," Cordileone said.

"We already hear daily reports about an 'epidemic' of drug use in this nation, with its negative consequences on family, work and health," Levada wrote. "The jury of qualified experts seem to find marijuana an entry level drug that, in far too many cases, can lead to even stronger and more dangerous drugs."

"Experimenting with the health and welfare of our children, the potential impact on road safety, not to mention the medical and legal implications that are far from resolved, seem to me to take us in a dangerous and unwise direction," he said.

"Proposition 64 does not create 'safe paths' for our children," said Barber. "In fact, as is unfortunately being demonstrated in Colorado's experience, it does just the opposite. Dare we risk the learning potential of children in school, or even before they enter school, from casual or inadvertent exposure to marijuana advertising and marijuana itself? How many children will fail to achieve their potential because of this law?"

Bishop Justice urged voters to reject the proposition because those who would be most severely impacted will be "our brothers and sisters in underprivileged neighborhoods."

"The legalized use of recreational marijuana will create circumstances that will no doubt create economic winners and losers, but the impoverished will be some of the victims of this measure," he said. "Instead, the entrenched systemic problems that will result in poor communities will be extremely difficult to overcome."

In Colorado, many marijuana growers locate their operations in low-income neighborhoods, he said. The bishop also cited a rise in the number of homeless people in that state, saying the "jobless and homeless 'marijuana migrants' have traveled from outside of the state so they can obtain marijuana at a cheaper cost and continue its use without the fear of legal repercussions."

"As usage increases, poor communities — as well as other economic groups — will also experience more failed drug tests, missed days at work or school, and even loss of employment," Justice said.