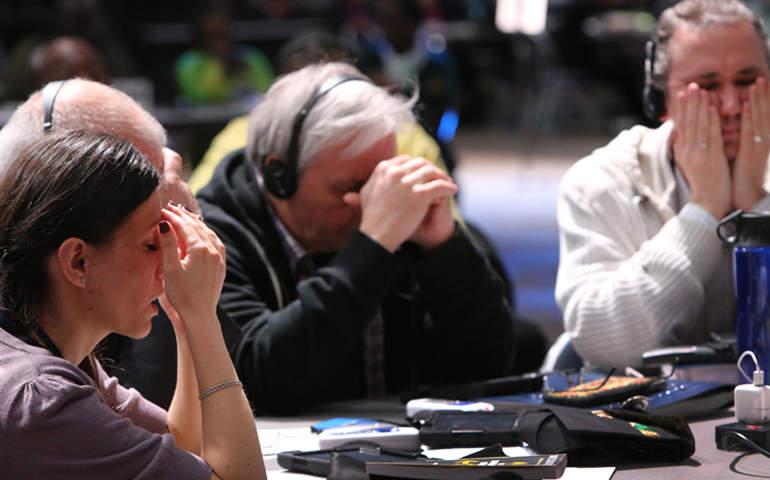 Delegates pause for a moment of prayer at the 2016 United Methodist General Conference. From left, Vasylyna Babych from the Ukraine-Moldava Provisional, and Alexander Pererva and Alexandr Meinikov from the Southern Russia Provisional. (Kathleen Barry, UMNS)

United Methodists, voting at their General Conference, have called on their church's mission agency to withdraw from a group founded to end the Israeli occupation of Palestinian lands. Critics see the group as more anti-Israel than pro-peace.

The petition asking for the agency's withdrawal from the U.S. Campaign to End the Israeli Occupation passed 478-318.

It called the U.S. campaign a "one-sided political coalition" that seeks to isolate Israel "while overlooking anti-Israel aggression."

"Blaming only one side while ignoring the wrongdoing of Hamas, Hezbollah, and Iran will not advance the cause of peace," the petition continued, naming groups that have stated their aim to destroy the Jewish state.

The vote -- though nonbinding -- disappointed many delegates who had wanted to increase pressure on Israel to withdraw from lands it has occupied since the 1967 war that pitted it against Jordan, Egypt and Syria.

The Rev. Armando Arellano, a delegate from Ohio, said it would be a mistake for the church's General Board of Global Ministries to leave the U.S. Campaign, a group he described as "neither pro-Palestinian or pro-Israel, but pro-equal rights for all."

"By withdrawing from the coalition," he continued, "we are withdrawing our commitment to be an agent of peace and justice."

The vote Tuesday, May 17, was not the first disappointment at the conference for delegates who support divestment and other tactics to pressure Israel over the occupation, which most of the world deems illegal. Over the weekend, a church committee rejected four divestment or investment screening resolutions related to the occupation.

Resolutions to call attention to Israel's occupation have gained traction within some mainline Protestant denominations. Though the Episcopal Church has rejected such efforts, the United Church of Christ in 2015 and the Presbyterian Church (USA) in 2014 voted to divest from companies they consider complicit in the occupation.