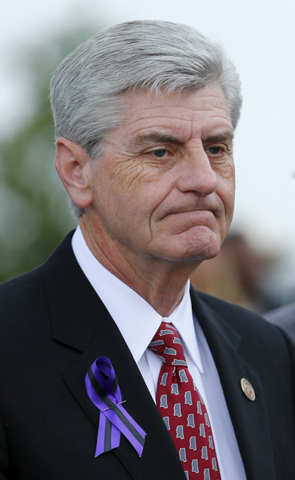 "This law has the power to change how the public views the gruesome reality of abortion in the United States," Carol Tobias, president of National Right to Life, said in a statement.

On April 15, Mississippi Gov. Phil Bryant signed into law the Unborn Child Protection From Dismemberment Abortion Act, passed by the state Senate in a 40-6 vote in March and by the state House 83-33 in February.

"We applaud any effort to end abortion in our communities and will continue to support women in crisis through our efforts with Catholic Charities, adoption services, parish-based ministries and supporting organizations such as Birthright," said Fr. Kevin Slattery, vicar general of the Diocese of Jackson.

"There are many faithful people out there working to give women the choice of life," he said in a statement. "We hope we can continue to build and strengthen those ministries for people in need."

Mississippi is the fourth state to enact the measure, after West Virginia, Kansas and Oklahoma. According to National Right to Life, the legislation -- based on the pro-life organization's model bill -- also has been introduced in Idaho, Louisiana, Missouri and Nebraska and may be taken up in several other states.

The procedure is a form of second-trimester abortion that "dismembers a living unborn child and extracts him or her one piece at a time from the uterus." It is called a D&E for "dilation and evacuation."

According to the National Abortion Federation Abortion Training Textbook, "D&E remains the most prevalent method of second-trimester pregnancy termination in the USA, accounting for 96 percent of all second trimester abortions."

It is different from the partial-birth abortion method used in late-term abortions, which is now illegal in the United States.

"When the national debate focuses only on the mother, it is forgetting someone," said Mary Spaulding Balch, National Right to Life's director of state legislation. "Banning dismemberment abortion in Mississippi has the potential to transform the debate when people realize that living unborn children are being killed by being torn limb from limb."