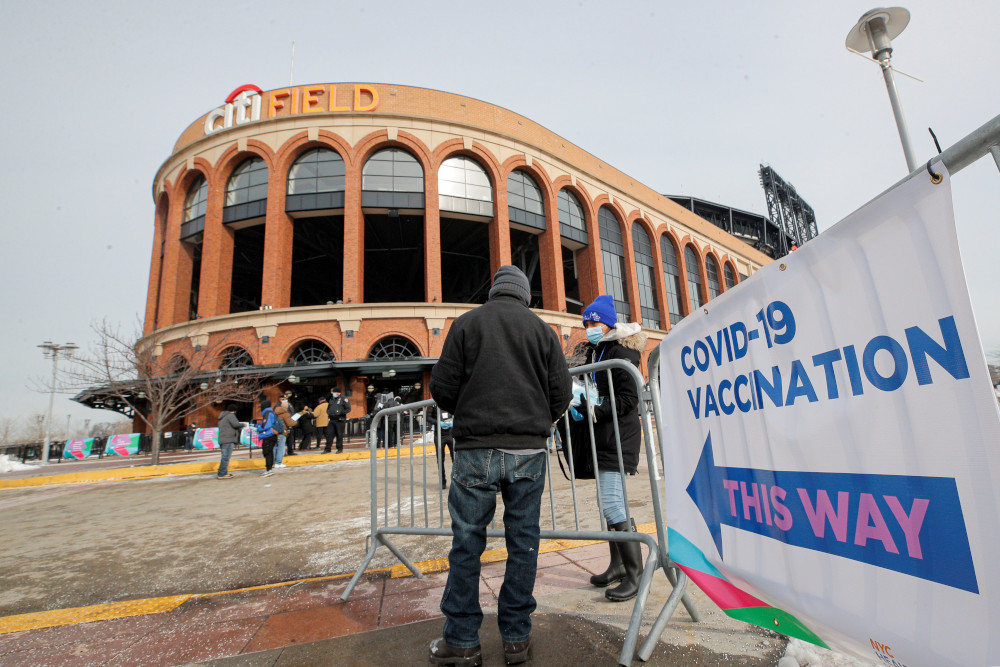 A man in the Queens borough of New York City arrives to receive the COVID-19 vaccine outside Citi Field Feb. 10, 2021, home of the New York Mets. (CNS/Reuters/Brendan McDermid)

Over a dozen nonprofit organizations, including Catholic Charities USA, praised the American Rescue Plan passed by the U.S. House early Feb. 27 for including "several provisions of importance to the charitable nonprofit sector."

The $1.9 trillion relief package, which now goes to the Senate for a vote, "would provide much-needed relief to many nonprofits on the front lines of helping people in communities across this country as we continue to deal with the challenges created by the pandemic and economic downturn," said a joint statement from the National Council of Nonprofits.

After the vote, House Speaker Nancy Pelosi, D-California, said the measure would be "transformative" in mitigating poverty amid the pandemic. "We are putting money in workers' pockets," she said in a statement. "As President [Joe] Biden has said, help is on the way."

However, on the House floor ahead of the vote — which came at 2 in the morning (EST) — Rep. Chris Smith, N.J., criticized Pelosi and the House Rules Committee for refusing to allow a vote on an amendment to add language to the bill "to ensure that taxpayers aren't forced to subsidize abortion," as provided by the long-standing Hyde Amendment.

The Hyde Amendment, reenacted every year for 45 years, outlaws federal tax dollars from directly funding abortion except in cases of rape, incest or when the life of the woman would be endangered.

The McMorris Rodgers-Foxx-Walorski Amendment — co-sponsored by 206 members — would have added Hyde language to the American Rescue Plan. The Hyde language also was rejected as what became the final bill worked its way through various House committees, said Smith and other national pro-life leaders.

"In a radical departure from all previous COVID-19 relief laws — the bill before us today mandates taxpayer funding for abortion on demand," Smith said. He and other members allowed to address the full House were given only one minute each to speak. Smith's longer written statement on the issue was entered into the Congressional Record, along with his delivered remarks.

"Unborn babies need the president of the United States and members of Congress to be their friend and advocate — not another powerful adversary," he said.

Smith, a Catholic, who is co-chair of the Congressional Pro-Life Caucus, quoted a letter that Biden, who also is Catholic, "once wrote to his constituents explaining his support for laws against funding for abortion by saying it would 'protect both the woman and her unborn child. ... Those of us who are opposed to abortion should not be compelled to pay for them.''' 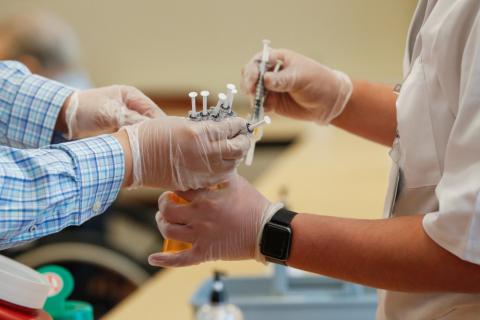 "Most Americans agree — 58% according to the most recent Marist poll," added Smith, who was among the 212 House members who voted against the measure. All of the Republicans and two Democrats rejected the bill. It passed with 219 votes.

Allocations in the American Rescue Plan include $17 billion for vaccine-related activities and programs and $110 billion for other efforts to contain the pandemic; $130 billion for public schools; $246 billion for extending unemployment benefits through August and increasing the federal supplemental payment from $300 per week to $400; and $143 billion to expand child tax credit, child care tax credit and earned income tax credit mostly for one year.

Other provisions include $45 billion to temporarily expand Affordable Care Act subsidies for two years and subsidize 2020 and 2021 coverage; $50 million for family planning; $25 billion for grants to restaurants and bars; $7 billion to allow more loans under the Paycheck Protection Program; $6 billion to increase nutrition assistance; and $350 billion for states and localities.

The House measure also mandates phasing in a hike in the minimum wage to $15 an hour by 2025.

The Senate is to take up its version of the measure the first week of March, but news reports said many in the chamber are divided over the size and scope of the bill. The minimum wage provision will not be included; the Senate parliamentarian said under budget rules, it cannot be considered.

In praising the House measure, the National Council of Nonprofits also said it falls short in some areas, including the expansion of who is eligible to apply for PPP loans by including some nonprofits with over 500 employees but said the deadline for applying for these loans should be extended beyond March 31, so newly eligible nonprofits have time to apply.

"We call on senators to include the additional relief that more than 3,000 organizations are calling for, so nonprofits can all continue to keep our workforces intact and help people in our communities," the organization said.

March for Life's president, Jeanne Mancini, weighed in on the House not including a Hyde provision.

"At a time when our country is mourning the deaths of 500,000 Americans, very little [less than 10%] of the misnamed COVID relief package actually goes toward combating the pandemic," she said. "Pro-abortion Democrats are using this bill to push through billions of dollars in subsidies for abortions, not only here in the U.S. but also abroad."

These lawmakers "are attempting to use the budget reconciliation process to accomplish this because they would not otherwise have the votes needed to do away with popular pro-life riders that protect Americans from funding the life-ending procedure," she said.

Like Smith, Mancini pointed to "consistent polling" that shows "most Americans oppose their tax dollars funding abortion both here and abroad. So much for unity."

Carol Tobias, president of National Right to Life, said some estimate that over $414 billion in taxpayer dollars in the American Rescue Plan "potentially could be used to pay for elective abortions or insurance plans that cover elective abortions."

"Democrat leaders in the House are not interested in the wishes of the majority of Americans who oppose taxpayer funding of abortions," Tobias said. "Democrat leaders are more concerned with fulfilling election-year promises made to pro-abortion groups. Those groups are interested in abortion at anytime, anywhere, for any reason and paid for by taxpayers."