500 years after the Reformation: End the schism! 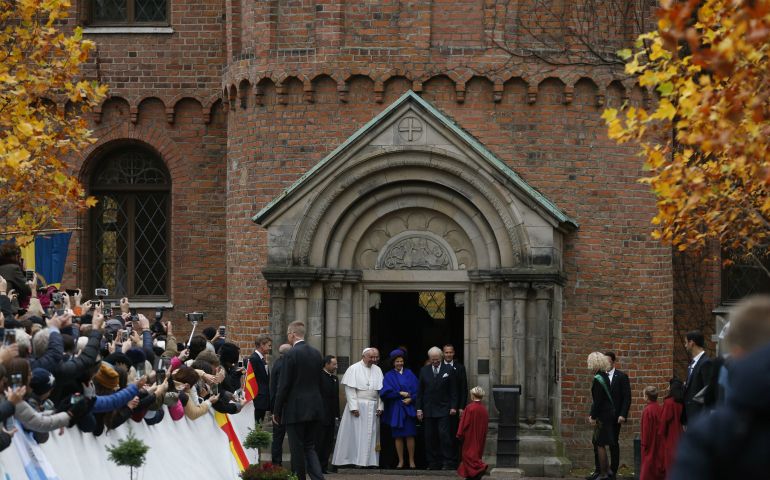 Hans Küng, Catholic priest and Swiss theologian, has taken great pains to end the 16th-century schism between Catholics and Protestants since he wrote his doctoral dissertation on "Justification. The Teaching of Karl Barth and a Catholic Reflection" in 1957. He continues that work today with the release of the statement below, which is being published simultaneously by National Catholic Reporter and The Tablet.

Küng has collected all his writings on the Justification Doctrine in the first volume of his collected works, which is being published by the German publishing house Herder. Sixty years ago, Küng's work led to the consensus reached by both churches on this central matter of dispute. The remaining 23 volumes of Küng's collected works document his efforts for ecumenical understanding and peace between denominations and religions.

It was most gratifying that the chairman of the Protestant Churches in Germany, Bishop Heinrich Bedford-Strohm, accompanied by the president of the German Catholic bishops' conference, Cardinal Reinhard Marx, officially visited Pope Francis in Rome together on the occasion of the Reformation Jubilee. The Pope spoke of "an already reconciled diversity." He said he greatly appreciated the spiritual and theological gifts that the Reformation had given us and that he wanted to do everything he could "to overcome the obstacles that still remained."

Already in September 2016, Bishop Bedford-Strohm and Cardinal Marx presented their "Common Word" entitled "Healing Memories — Bearing Witness to Christ." After five centuries of condemning and inflicting wounds upon each other, both the two leading Churches in Germany declared that they intended to celebrate the Reformation anniversary together as a "Feast for Jesus Christ."

A further pivotal point in the commemoration process will be the main Service of Repentance and Reconciliation that the Council of the Protestant Churches and the Catholic bishops' conference will celebrate together at Hildesheim on March 11, 2017.

We have, however, heard Vatican declarations of intent and suggestions of repentance and reconciliation all too often. We ecumenically committed Christians at long last want to see actions. Unfortunately, the "Common Word" does not mention the deadlock that exists in both church hierarchies on the decisive issues and disregards the fact that in many Protestant and Catholic communities, ecumenism has already been practiced for a long time now. For these communities, mutual recognition of each other's ministries and Eucharistic hospitality are no longer a problem. Church leaders lag far behind them. If the leaders do not take the matter of "overcoming the still remaining obstacles" seriously, they alone will have to bear the responsibility for not doing so before God and the faithful.

In the 2017 Jubilee Year, those responsible should consistently put the results of the ecumenical Dialogue Commissions into practice. The Catholic Church should consider the following issues:

Innumerable Christians want to see the Protestant side bring these postulates to the attention of the Catholic Church just as clearly and outspokenly — but naturally not without the necessary self-criticism. Merely celebrating the 500th anniversary of the Reformation without really ending the schism means incurring yet more guilt. May the pressure exerted by theologians, grassroots Christians, Christian communities, and many committed men and women help the church leadership in Rome and elsewhere, which is so often hesitant and afraid, not to miss this historic opportunity but to wake up, otherwise yet more people will turn away from the Church and more communities and groups will take the law into their own hands! In today's globalized, secularized world, Christianity will only come across as credible if it presents itself in truly reconciled diversity.

[Fr. Hans Küng is a Swiss citizen and professor emeritus of ecumenical theology at Tübingen University in Germany. This article was translated from the German by Christa Pongratz-Lippitt.]

500 years after the Reformation: End the schism!