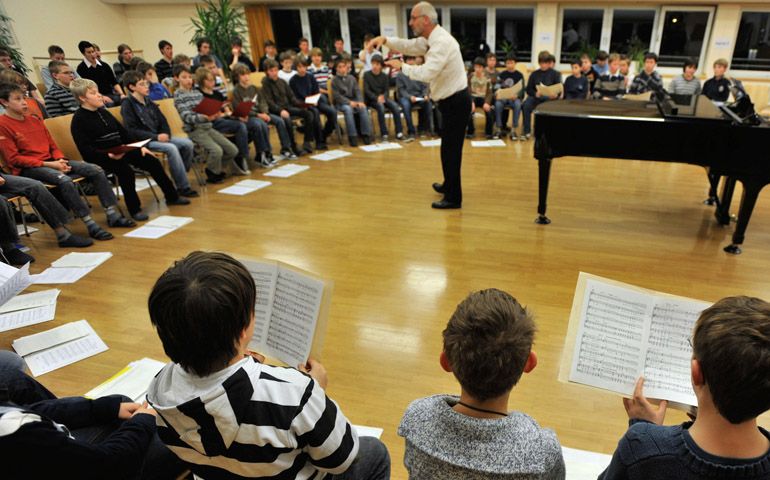 Students practice at the Regensburger Domspatzen in Regensburg, Germany, in a 2009 photo. (CNS/KNA-Bild)

Two hundred and thirty-one young members of the famous German "Regensburger Domspatzen" boys choir were abused between 1953 and 1992, three times the official number published in the diocesan report of February 2015, according to an independent lawyer.

At a press conference in Regensburg on Jan. 8, Ulrich Weber, an independent lawyer called in by the diocese in May 2015 to undertake further investigations of the abuse scandal, said he feared that the estimated number of unrecorded cases was far higher.

It is highly probable that every third pupil at the preparatory school for the boys' choir was exposed to physical abuse consisting of violent beatings, withholding fluids for up to five days, forced feeding and sexual abuse "from fondling to rape" during those years.

Weber spoke of a "system of fear" which prevailed for decades at the school.

The perpetrators were a small circle of priests, teachers and employees which included, Fr. Johann Meier, headmaster of the preparatory school from 1953-1992, Weber said.

Weber's figures are significantly higher than those officially published by the Regensburg diocese in February 2015 which found that 72 former members of the choir had been abused. Regensburg Bishop Rudolf Voderholzer apologized for the abuse at the time and offered each victim 2,500 euros (US$2,730) compensation.

Georg Ratzinger, emeritus Pope Benedict XVI's older brother, was the musical director and conductor of the "Domspatzen" from 1964-1994, for most of the period during which the abuse occurred.

The "Domspatzen" is Germany's oldest and most famous boys choir. It celebrated its 1,000th anniversary in 1976. Ratzinger conducted the choir at his brother's consecration as Munich archbishop in 1977, and also when it sang in honor of Queen Elizabeth II's state visit in 1978 and Pope John Paul II's visit to Munich in 1980.

In 2010, when the first accusations of abuse were made, Ratzinger admitted in an interview for the Passauer Neue Presse that he knew that boys were beaten when he was chorus master but said that up to 1980, corporal punishment was allowed in Germany. He himself had sometimes slapped boys but he had never "beaten them black and blue," he said.

He had been told by a senior pupil that boys were being beaten in the preparatory school but "I was not aware of the degree to which brute force was being applied. If I had known about Fr. Meier's excessive violence I would have said something at the time," Ratzinger said in 2010.

Asked to comment on Weber's report, Ratzinger, who will be 92 on Jan. 15, told the Passauer Neue Presse on Jan. 10 that he had no knowledge of any sexual abuse at the time. Beatings and slapping were usual "in all educational fields and in families in those days," he said.

Ratzinger said he knew that Meier's slaps to the face and boxes on the ear were violent, but he had never seen any traces of violence on any of the boys. He also said that on account of his "brutal pedagogical methods," Meier had been forced to retire in 1992.

Ratzinger contradicted Weber's assertion that a "system of fear" had prevailed at the school. "That is not true," he said. Graduates of the school had come back to visit and assured him that they were grateful for the education they had received there and they would "hardly come back and say that" if it had been a place where fear and violence had prevailed, he said.

It was crucial to clarify why sexual abuse was still being covered up, Jesuit Fr. Klaus Mertes told the website domradio.de Jan. 8. Mertes was the pioneer whistleblower of the priestly sex abuse crisis which swept across Germany, Austria and Switzerland in 2010, which Austrian Cardinal Christoph Schönborn of Vienna called a "tsunami."

"The hushing up of the initial hushing up must be investigated as well as the actual abuse," Mertes said. The reason why the church was still reluctant to investigate and clarify sexual abuse of minors was "because the moment I hear that such crimes were committed in my community, or in my diocese -- and I'm not only referring to bishops but to the faithful in general -- that is quite naturally exceedingly painful as it calls the entire self-image of the church into question," he said. "People's first reaction is therefore to adopt a defensive stance against the victims. They do not want to hear what the victims have to say. An investigation, however, if it is taken seriously, always means being prepared to believe the victims and that has immediate consequences for one's self-image."

Five years after the priestly sex abuse "tsunami" of 2010, it is "outrageous" for those responsible in the church "merely to go on and on apologizing" as that was not sufficient, Mertes said.

"Continually looking for scapegoats, traitors who were fouling their own nests or blaming the press must stop and those responsible in the church must now really accept their responsibility including the responsibility for hushing things up," he said.

He could not understand how it was possible that those responsible in Regensburg had got away with the abuse for such a long time, Mertes said, recalling that the first abuse cases came to light in 2002. But he admitted that things have improved under the present bishop.

"But now we not only have to clarify the sexual abuse but also why it was hushed up at the time and then get down to finding out why the hushing up was hushed up," Mertes said.

'Catastrophic institutional failure' can be fixed