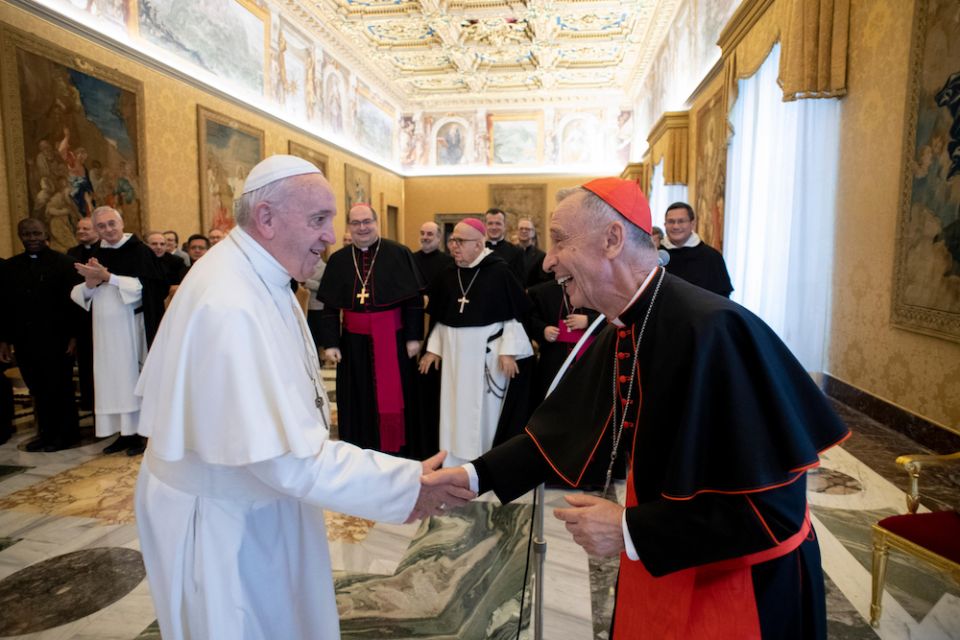 Pope Francis greets Cardinal Luis Ladaria, prefect of the Congregation for the Doctrine of the Faith, during a meeting with members of the International Theological Commission at the Vatican Nov. 29, 2019. (CNS/Vatican Media)

The move, the lawyers say, will simplify communication between local church officials and civil authorities in individual abuse cases across the world.

Mercy Sr. Sharon Euart, a former executive coordinator of the Canon Law Society of America and a former associate general secretary of the U.S. bishops' conference, said the pontiff's Dec. 17 decision shows "his deep commitment to addressing sexual abuse in the church."

Nicholas Cafardi, a civil and canon lawyer who served on the first iteration of the U.S. bishops' National Review Board, called the abolishing of the confidentiality rules, known as the pontifical secret, "truly ground-breaking."

"It had historically been argued by the church's critics that one purpose of the church's own criminal proceeding against a sexually abusive priest was to cover the matter up," he said.

Cafardi, who is also dean emeritus of Duquesne University School of Law in Pittsburgh, said the decision clears up questions some canon lawyers had about how to interpret a 1962 instruction from the Vatican's doctrinal congregation outlining the use of pontifical secrecy in abuse cases.

"This new rescript resolves all doubt," he said.

Francis' decision to abolish the pontifical secret, which went into effect immediately, came in a brief instruction titled Sulla riservatezza delle cause ("On the Confidentiality of Legal Proceedings").

The instruction specifies that while abuse cases will be handled with a lower level of confidentiality going forward, anyone who files a report, alleges abuse, or comes forward as a witness to abuse "shall not be bound by any obligation of silence with regard to matters involving the case."

In a separate action released at the same time as the instruction, Francis also made changes to a set of norms issued by Pope John Paul II in 2001 that define the "grave delicts" the church reserves to the judgement of the doctrinal office, known formally as the Congregation for the Doctrine of the Faith.

In those changes, which go into effect Jan. 1, the pope redefines child pornography as any inappropriate photographic material taken of minors under the age of 18, raising the age threshold from the previous standard of the age of 14.

Euart, now the executive director of the Resource Center for Religious Institutes, said the combination of the two actions together "are important signs of the Holy Father's desire to address concretely and directly efforts to fight sexual abuse in the universal church."

"It's going to be a prudential judgment call, whether it's appropriate to make this public or not," said Morrisey, an emeritus canon law professor at Saint Paul University in Ottawa. "Bishops can't say, 'I can't make it public because the pope won't let me.' "

"This is very helpful to the bishops," said the Canadian.

In terms of what impact the decision to abolish pontifical secrecy might have in dioceses in the U.S., Cafardi noted that the American church has had a more limited use of the pontifical secret since the bishops passed their Charter for the Protection of Children and Young People in 2002.

Under the charter's fourth article, he said, "all American dioceses have had the policy of reporting to civil authorities as soon as they learn of an allegation against a priest."

"It is hard for me see this having great impact in the U.S.," said Cafardi.

Morrisey suggested that a further step Francis might take in the future is to grant local bishops more authority to conduct canonical proceedings against accused priests, rather than having to wait on the Vatican to make decisions.

"The Second Vatican Council said a bishop has all the ordinary and proper power for the administration of his diocese," said the Oblate.

"All of those delicta graviora cases with perhaps one or two exceptions could reasonably be handled at the diocesan level," Morrisey said, using the Latin term for "grave delict."

'All of us together': Sex abuse survivor seeks healing within the church