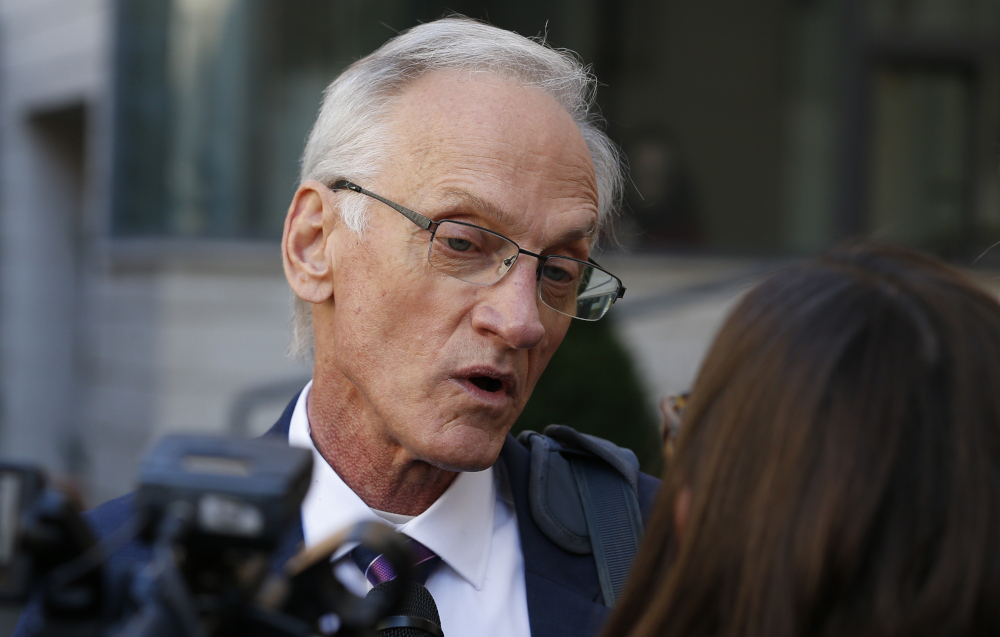 Phil Saviano speaking with journalists near the Vatican in Rome on Feb. 20, 2019. (CNS photo/Paul Haring)

Almost 20 years ago, clergy abuse survivor Phil Saviano told the first Voice of the Faithful conference: "I am not faithful." He said the repeated assaults he suffered from Fr. David Holley had led to losing his faith before he even went through puberty.

Yet, on Dec. 3, Saviano was buried in a rural cemetery of the Diocese of Worcester, after a funeral Mass at St. Denis Catholic Church in Douglas, Massachusetts.

It was the very church where Saviano had been sexually assaulted repeatedly as a boy by Holley. A familiar photo shows Phil in front of St. Denis – the church and the statue – in the late 1990s, wearing a Recovering Catholic T-shirt. What are we to make of Phil Saviano's provocative final gesture?

Phil's funeral Mass (the video is available here) was nothing like the healing Masses and ceremonies of atonement that have become customary in the fourth decade of our ongoing abuse "crisis." Many survivors bravely attended, as well as four members of the original Boston Globe "Spotlight" team that rocked the U.S. church with their landmark reporting on clergy abuse throughout 2002.

The Mass wasn't conveniently detached, in the manner of episcopal apologies. Phil chose four eulogists. Two were survivors: David Clohessy, formerly of the Survivors Network of those Abused by Priests, and Susan Pavlak of the Gilead Project. Phil's brother Jim spoke beautifully about the abuse crisis and his brother's vindication and legacy. As Phil's fellow board member at BishopAccountability.org, I was the fourth speaker.

Phil picked Fr. Ron Coyne from Transfiguration Parish in the Boston Archdiocese as celebrant. Coyne had visited Phil twice in hospice and had hosted Phil, Susan and me for a clergy abuse panel at his old parish, St. Anne's in Hyde Park. As an outsider, Coyne was free to engage bluntly and directly with clergy abuse in the prayers of the faithful and his homily; the Mass and music were unusually dignified and traditional.

By coming home to the parish church where he had been abused, Phil Saviano seemed to take possession of the place. There was an astonishing open-mindedness about the gesture and a usefulness too. Often, we lose sight of the Catholicity of the abuse crisis. Real improvements always seem to come from the outside – statute of limitations reform, reports of attorneys general, prosecutions and lawsuits – whereas change within the church often feels sullen and forced. 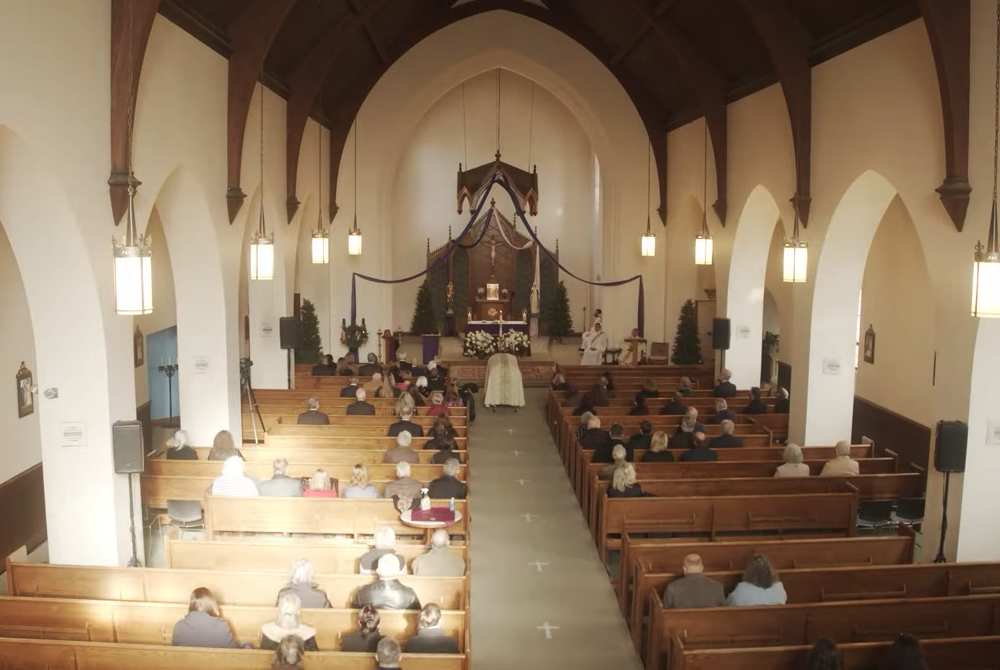 We forget that the abuse didn't just happen to occur opportunistically in Catholic situations, but was done in the intimacy of confession, exploited the centrality of the Eucharist, and was woven into our Catholic lives and beliefs. By choosing a funeral Mass, Phil brought his abuse and Catholicism together in a demanding and potentially fruitful way. He shook things up.

If Phil Saviano can come back to the church where he was abused, surely Bishop Robert McManus can release a list and full accounting of the credibly accused Worcester priests, both diocesan and religious. McManus is one of the few bishops in the United States not to have taken this necessary step, and the only one in New England. Cardinal Sean O'Malley still hasn't included religious order priests and externs in his Boston list, 10 years after it first appeared. Real transparency like this would be much better than episcopal lip service paid to Phil Saviano's important contributions.

Phil's funeral Mass could also provide an opening for St. Denis Parish. Phil was a uniquely effective activist, and a steady stream of reporters has visited St. Denis over the years as a result. If this has seemed a burden, perhaps it's time for Phil Saviano to be accepted as the parish's favorite son. He wasn't the only victim of Holley, and another credibly accused priest, Fr. Edward Lettic, worked at St. Denis and left suddenly too.

Every parish has an abuse history, and no parish that I know has confronted theirs as beautifully as St. Denis did on Friday. I have a dream that every parish in the United States will account for its abuse history on the parish website and do real outreach to survivors.

Sadly, survivors of Catholic clergy abuse are very often traumatized twice — by their abuser and by the bishop or religious superior in charge of the offender. Pastoral programs in the dioceses can seem calibrated to shunt survivors away from obtaining justice in the courts. Yet survivors have spiritual lives, and many still experience the pull of Catholicism, as well as an aversion to it. Phil Saviano's experience is an example. As he explained in his 2002 Voice of the Faithful speech, the abuse inflicted by Holley and the way the abuse was ignored in confession and by the diocese separated Phil from his childhood faith and made him a "spiritual drifter."

It's not true, as Coyne said in his homily, that Phil chose "to remain Catholic." He traveled long and far from the terrible experiences of his abuse as a child. But I do believe, as Coyne also said, that Phil was consoled on his deathbed when he took Communion with his brother Jim and sister-in-law Cynthia, and when he received the sacrament of the sick. Phil and his "amazing" brother — Phil's word — had become very close during his last illness.

Phil Saviano was certainly skeptical of religion and a deeply inquisitive person. He was also very open to experience. When he traveled in Mexico and Eastern Europe, he often visited churches and synagogues, and in his business, Viva Oaxaca Folk Art, he represented many Oaxacan artists who were fundamentally religious artists. He was open and curious about my religious beliefs and Susan Pavlak's, and the survivors whom Phil helped were in various places when it came to their religious faith.

Perhaps Phil Saviano's choice of a Catholic funeral Mass will encourage a broader engagement with the spiritual life of clergy abuse survivors in all their diversity. I was struck by the power of the Mass on Dec. 3. It afforded Phil a strong context for opening conversations and addressing issues that are almost always ignored in Catholic Masses. Prayers of the faithful hardly ever mention abuse. His courage in making this surprising choice, and survivors' willingness to go to a very uncomfortable place on his behalf, could have real influence, if NCR readers and others take the time to view the Mass online.

Phil loved the Day of the Dead and the art associated with it. One year, he sent his friends photographs and videos of the parades and fireworks, and the ceremonies for the ancestors in the candlelit graveyards of Oaxaca.

I believe this is a key to Phil's spirituality and to the decisions he made at the end of his life. He told me that he was glad that the St. Denis Cemetery would be his final resting place, because his family was there. The Mumford River, where he swam and fished as a boy, flows at the bottom of the cemetery hill. I think he worked back, in his careful and imaginative way, from the cemetery, through the woods where he played as a child, to nearby St. Denis Church, where his funeral took place.