Beneath the child abuse scandal 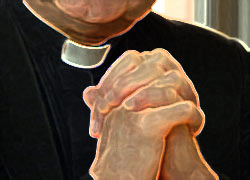 Many people, including bishops, date and label the "Crisis in the Catholic Church" to Jan. 6, 2002 when The Boston Globe began publishing its series about sexual abuse of minors by priests and revealing the conspiracy of bishops in covering up crimes. That was the flash point of a worldwide scandal. The crisis it epitomizes is more profound.

The uncontrollable public exposure and sharp focus on clergy sex abuse shocked everyone, but the fact of a church and priesthood in crisis did not come as a surprise to the United States hierarchy. "It is clear that we are in some kind of a crisis of priestly ministry. The nature of the crisis is not at all that clear." Those were the words Daniel Pilarczyk archbishop of Cincinnati directed at his fellow bishops on June 14, 1986. He went on to provide a checklist of possibilities: "Is it a crisis of image? Is it a crisis of numbers? Is it a crisis of celibacy? -- change? -- lay ministries? -- prayer? -- secularism? -- confidence? It is probably all of these and perhaps other things as well. And we have to respond to the crisis."(1)

Already in 1972 sociologist Fr. Andrew Greeley reported to the five bishops and the twelve priest consultants of the Ad Hoc Committee on Priestly Life and Ministry set up by the NCCB. He explained his Sociological Investigation of American Priesthood that he instigated at the request of the bishops. "There appears to be a crisis in vocations to the priesthood." (2) His suggestions for supporting clergy development were presented in juxtaposition with the findings of Father Gene Kennedy and Doctor Victor Heckler who had been commissioned by the bishops to produce a Psychological Investigation of the priesthood in the United States. (3)

The Kennedy-Heckler Report did not use the word crisis, but the conclusions they presented had "crisis" written all over them. They concluded that over two-thirds of priests in their representative psychological study were psychosocially either underdeveloped or mal-developed.

After more than a quarter of a century of evidence of corruption -- and if a record of 6 to 9 percent of U.S. priests having abused minors (4) and 66 percent of bishops covering up for abusing clerics (5) is not corruption I do not know what is -- Pope Benedict admits that "sin is in the church" and says publicly that we are facing a "cultural and spiritual crisis." (6)

Certainly culture in the broadest sense is immersed in ungodly problems where the physical and sexual abuse of minors and women is epidemic. However, the economic, cultural, and spiritual crisis challenging societies in no way mitigates the core problem of the Catholic church today.

In the simplest and most accurate terms possible, the Catholic crisis is the widespread sexual activity of Catholic clergy publicly promised to celibacy, and a morally and doctrinally underdeveloped understanding of human sexual nature.

Without doubt many good and dedicated priests (and nuns) still serve. Pope Benedict XVI could justly say, "The priest is a gift from the heart of Christ, a gift for the church and the world. If we look at history, we can observe how many pages of authentic spiritual and social renewal have been written with the decisive contribution of Catholic priests…" (7) That is true. There have also been, and always will be, some miscreant clergy in active ministry who do not contribute to renewal. That does not constitute a crisis. A crisis explodes when there is no longer a large enough reserve of psychologically well balanced and observant (saintly) and honest bishops and priests to counter the influence and power of corrupt and hypocritical men in power.

It is a serious mistake to assume that the pope, bishops and priests operate just like everybody else and are "just like" everybody else. Three qualities make them unique: "habits different from those of secular men, protection of the sacred, and pursual [sic] of clerical ritual." (8) Priests are part of a culture -- a clerical culture -- that is woven into whole, if tattered, cloth by the presumption of celibacy. The celibate requirement for inclusion into the culture is of primary importance. That requirement by law involves "perfect and perpetual chastity." (9) The presumption of clerical celibacy is the fabric of the culture; to remove celibacy as a requirement means the disintegration of the culture -- loss of the control and power of the whole authoritarian system. As medieval historian Mayke de Jong writes, "It was from sexual purity that the priesthood was believed to derive its power."

The set of shared attitudes, values, goals, and practices that characterize the priesthood are not simply those articulated by papal pronouncements that outline the ideals and the positive accomplishments of the institution and organization. The legislation on celibacy is central to keeping clerical culture together. Catholic clerical celibacy separates a man from all other societies, makes him dependent on a homo-social group, confers status, insures employment and care, and subsumes his identity into a powerful ancient institution, and allies him with the divine. The requirement for inclusion is obedience, conformity and presumed celibacy.

Sexual activity of the widest variety is tolerated within the system if it is kept secret. Submitting sexual activity to the seal of confession is a major vehicle to solidifying the power of the culture and forming a clerical identity (too frequently pathological).

The attitudes, values, and practices of clerical culture are bound by secrecy. Sexual secrecy is the key to the clerical culture. It beats at the heart of the crisis. Currently clerical culture, on balance, is corrupt. Priests -- even good priests -- live, breath, and have their being in a culture of hypocrisy. Sexual secrecy dominates the culture from seminary training through the episcopacy to the Vatican. There is a great deal more at work in the operation of clergy and the clerical system than "passion for the Gospel" that the pope extols.

Few people want to dirty their hands with the crisis. Who from inside the clerical culture has spoken up and reported abuse? (10) Many folks are sick of hearing about clergy abuse. Fr. James Martin, an editor of the Jesuit magazine America told The New York Times, "I don't think editors realize how tired Catholics are of seeing the church portrayed through the lens of sex abuse." (11)

That poses the real conundrum: percolating behind the scandal of priests preying sexually on minors and vulnerable women and men only waiting to be served up steaming hot is the secret system where priests and bishops enjoy the sexual favors of willing adult women and compatible adult men; (to say nothing about pornography and masturbation). The questions about clerics' mistresses, their children, the abortions of their companions (often instigated by them) and widespread homosexual activity cannot long be ignored. (12) A more powerful lens is waiting to focus on the clerical culture that will render the crisis in ever more precise dimensions.

Beneath the child abuse scandal is a clerical world of sexual reality. Besides avoidance and denial of that reality is a system of moral disbelief sustaining the crisis. Many priests simply do not believe a host of church moral dictums about human sexuality. A more perfect example is not possible than a top official in the Vatican's Congregation for the Clergy who was caught on television in 2007 claiming he "didn't feel he was sinning" by having sex with gay men (13) -- unless it is a monsignor acting out in his Vatican office, or a Vatican chorister in 2010 allegedly procuring male prostitutes for papal gentleman-in-waiting.

Yes, there is a major Roman Catholic crisis -- from the papal household and curia to regional and pontifical seminaries, to our neighborhood parishes, in religious communities and monasteries. The name of that crisis is sex. It is time that we all move beyond public relations to counteract the attached scandal and move to embrace what sociologist Tom Westrum calls a "fix." (14)

Read all the contributions to NCR's Examining the Crisis series.

[Richard Sipe is a mental health counselor and author who earlier spent 18 years as a Benedictine monk and priest.]

(1) Origins, July 3, 1986. Vol. 16: No 7. Pp. 138-46.
(2) Origins , December 14, 1972. Vol. 2: No. 25. Pp. 407-11.
(3) Both Studies were published by the Liturgical Press, Collegeville, MN, in 1972.
(4) John-Jay Report February 27, 2004. Pp. 30-7; Sipe, A Secret World, 1990, P.159-87.
(5) Brooks Egerton & Reese Dunklin. The Dallas Morning News, January 21, 2004 "Two-thirds of bishops let accused priests work"
(6) May 27, 2010 Benedict to the Italian bishops: society today is facing a "cultural and spiritual crisis as serious as the economic crisis. It would be illusory to counter one, ignoring the other."
(7) Report from Rome by Nick Pisa June 13, 2010.
(8) R.C.Trexler, Synodal Law. Biblioteca Vaaticana, 1971.
(9) Canon 277.
(10) Bishop Geoffrey Robinson is the lone exception witnessed by his resignation and book Confronting Power and Sex in the Catholic Church. 2007.
(11) Hoyt. NYT, 11-08-09.
(12) The Shroud of Secrecy: The Story of Corruption in the Vatican. 2000. Originally authored in Italian, Via col vento in Vaticano by Il Millenari, 5 anonymous Vatican insiders. "In the list of hopefuls for promotion, the one who gives himself from the waist down has a better chance than the one who gives his heart and mind to the service of God and his brothers. In those cases, charm is worth more than merit.
"For many prelates in the Curia, the beautiful boy attracts more goodwill and favor than the intelligent one. Subjects can easily detect effeminacy in the tastes of their superior and they will play it to their advantage. The madonno, with his masculine attributes yet feminine bearing, often exploits his ambiguity and pleasing features for as long as he is able." P.110.
(13) La Republica, Oct. 2007.
(14) Cf. Sipe, "Public Relations vs. Raw Data" June, 2010. And Ron Westrum, "Social Intelligence About Hidden Events: Its Significance for Scientific Research and Social Policy" 1982, Sage Publications.

Accountability | Beneath the child abuse scandal

McCarrick, regardless of office, should be subject to civil law

Your thoughts on accused clergy