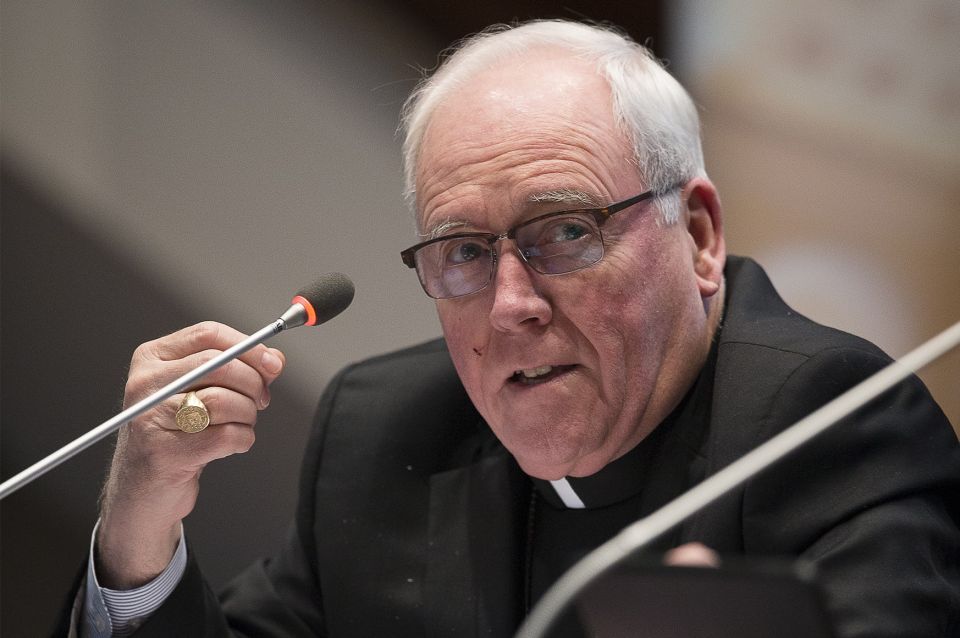 Bishop Richard Malone of Buffalo, N.Y., is seen at the headquarters of U.S. Conference of Catholic Bishops in Washington Jan. 17. (CNS/Tyler Orsburn)

BUFFALO, N.Y. — How the Diocese of Buffalo handles cases of priests suspected of abuse was the subject of a report Oct. 28 by the CBS newsmagazine "60 Minutes," which talked to a woman who leaked diocesan files on those priests to a local TV station.

"60 Minutes" also interviewed a priest who resigned his role as a counselor to Bishop Richard Malone of Buffalo citing lack of action by the bishop, and spoke to a permanent deacon who has called on the bishop to resign.

Malone "respectfully" declined a request by "60 Minutes" for an on-camera interview and sent the program a statement that said in part: "We continue to reach out to victims, remove clergy with substantiated allegations from ministry and cooperate with federal and state investigations."

Acknowledging the show was free to interview "whomever they wish for this story," he said: "It is clear to me and my staff that your roster of interviews did not include those who are aware of the full extent of the efforts of our diocese to combat child abuse." Malone's statement added, "Nor does it include those who urge me every day to stay the course and restore the confidence of our faithful."

Siobhan O'Connor, a former executive assistant to Malone, leaked documents she had seen on the job to Buffalo TV station WKBW. According to "60 Minutes," the documents showed 118 priests in the diocese who had faced credible allegations of abuse -- nearly three times the 42 priests who appeared on a list released by the Buffalo Diocese last March.

"I felt that instead of being transparent, we were almost being the opposite or -- or half transparent. 'Here are the names that we would like you to know about, but please don't ask us about the rest,'" O'Connor told "60 Minutes."

She told the newsmagazine she leaked the files because "the reality of what I saw really left me with no other option. Because at the end of my life, I'm not gonna answer to Bishop Malone. I'm gonna answer to God."

Fr. Bob Zilliox, a Buffalo diocesan priest, left his post as a counselor to Malone on church law, including abuse matters. "I think the hypocrisy, the lip service, you know, the 'Yes, Bob, I agree with you,' and then I would walk out of an office and nothing would happen," is what ultimately prompted him to resign, he told "60 Minutes."

Zilliox, who disclosed that he had been abused by a Buffalo diocesan priest when he was 13, said: "A lot of cases should have been handled differently. They were not. A lot of cases probably should have gone to Rome at the time. They did not." He said that "at least eight or nine" of those priests were still serving in the diocese.

"It's beyond troubling. That's not the church. The church is holy," Zilliox said. "Those are individuals in the church who are weak and who have made very bad decisions. And because of that, they need to be held accountable for what they've done."

Deacon Paul Snyder, a hotel owner, called on Malone to resign after WKBW aired its reports from the leaked documents in August.

Malone, in an Aug. 26 statement, said: "I have prayed about this very question. And I have sought guidance from colleagues, friends, brothers and sisters in ministry. I am grateful for the support of so many, and I stand before you today recommitted to my calling to serve as bishop of Buffalo. The shepherd does not desert the flock at a difficult time."

Snyder, on "60 Minutes," called the situation in the diocese not a crisis but a scandal.

He added he's gotten more than 400 notes and emails after calling on Malone to resign. "They want to be part of the solution but they think this bishop is preventing that from occurring," he said.

Moreover, "I don't have faith right now that any particular bishops have the courage to do the right thing," Snyder added. "I mean we all praise our martyrs on Sunday and we praise and we sing, but boy, it's sure as hell is hard being a saint when it's your ass on the line. And I want these cardinals and these bishops to start putting their ass on the line and start protecting their people."

The U.S. bishops are to consider approving additional protocols when a bishop is accused of abuse or of mishandling abuse cases when they meet in Baltimore Nov. 12-14 for their fall general meeting.

"The church is in the eye of a storm largely as a result of wrong decisions made decades ago and even some made recently, as I have acknowledged. But, our efforts and our focus have always remained steadfast: Protect the children and reconcile with the victims," said a part of Malone's statement to "60 Minutes" that was not aired. It was posted on the diocesan website Oct. 27.

The diocese has strengthened its policies and protections against abuse, he said, "and we plan to extend those protections for adults as well." Other actions have included instituting an Independent Reconciliation and Compensation Program and hiring a former special agent of the FBI "to monitor our professional responsibilities and obligations."

A diocesan statement released late Oct. 29 called the "60 Minutes" report and a second report aired on WKBW "incomplete, out of context and in some cases plainly inaccurate," but did not specify particulars.

Addressing clergy and laity who leaked "confidential documents," the statement said, "If they have any specific matters that they believe need to be addressed, we would appreciate that information."

The statement added, "We intend to better utilize our platforms moving forward as a catalyst to share important information, especially about the abuse crisis. Those platforms include: our website, social media -- Facebook, Twitter and Instagram -- and our monthly WNY [Western New York] Catholic newspaper. Several very positive changes are in the works to more effectively, transparently and actively communicate with the public."

People, the statement said, "will make up their own minds once they have heard our response to these stories."