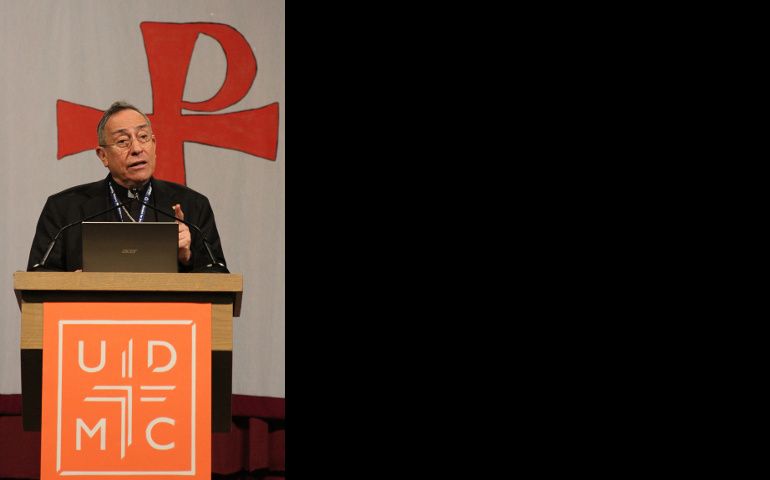 Vienna — Honduran Cardinal Oscar Rodriguez Maradiaga, coordinator of the Council of Cardinals, has high hopes that the council will bring the central administration of the church up to date.

"There is a lot of hope and high expectations of the commission I was appointed to lead. I am sure that Pope Francis is in favor of making the Curia more agile and easier to work with," Rodriguez Maradiaga told KNA, the German Catholic news agency, on a visit to Germany in January.

The most important priority is to change the mentality of the Curia, Rodriguez Maradiaga said. The pope is against careerism, he said: Many priests who worked in the Curia had up to now automatically become bishops, archbishops, and even cardinals -- "but that no longer corresponds to the mentality of the world church, and bishops from all over the world have voiced their displeasure. Working for the Curia is a service and not a career or a position of power," the cardinal said.

Rodriguez Maradiaga said further important steps can be taken to make the Curia truly representative of the world church -- that is, more international -- and to give local bishops' conferences greater decision-making powers. "There are many questions that do not need to be decided by the Roman Curia," he said.

As to the Council of Cardinals: "One day, soon after he was elected, the Holy Father called me and said, 'Listen. I want to set up a commission. Do you feel you could lead it?' " Rodriguez Maradiaga replied he could.

"And that was how it began," he said.

"When we meet in one of the ordinary meeting rooms at the guest house, we address problems openly in a climate of confidence. We are here to serve and to make recommendations. That is what we have collected the chief concerns of the world church for," he said.

Asked when the first outcome of the Council of Cardinals' discussions would be available, Rodriguez Maradiaga said Pope Francis doesn't like precipitous decisions, so the council is proceeding by the Jesuit method of spiritual discernment, "which means devoting time to listening, dialoguing, praying, and only then arriving at decisions."

The council began with the question of the Synod of Bishops, as it was essential to expand the Second Vatican Council's doctrine of collegiality, he said, and then went on to the organization of the Curia, beginning with the State Secretariat and the dicasteries or ministries. Third on the list would be the pontifical councils, and the fourth session would deal with a constitution for the Curia.

"But as the C-8 is now a permanent institution, it will continue to advise the pope on reform. There is a great deal of hope. One suggestion is to found a Congregation for the Laity, who are, after all, the majority in the church," Maradiaga said.

The cardinal was questioned on three issues that have made headlines in the German church in recent months: the apparent tendency of Archbishop Gerhard Ludwig Müller, prefect of the Congregation for the Doctrine of the Faith and a cardinal-designate, to contradict the pope; whether the bishop of Limburg, who has been told to take a time out by the pope until his finances are audited, will be allowed to return to his diocese; and how the German church, which is one of the richest churches in the world, is to put the pope's option for the poor into practice.

Müller is "still learning," the cardinal said. As a German theology professor, Rodriguez Maradiaga told the Kölner Stadt-Anzeiger newspaper that Müller is convinced something could "only be wrong or right -- and that's it. But I say: The world, my brother, is not like that. You should be a little more flexible when you hear other opinions so that you don't only say: No, this is fixed and final."

As to Limburg, Rodriguez Maradiaga said it would not be possible for the bishop to return. "I know that many of the faithful in the Limburg diocese are hurt. You don't pour alcohol on open wounds in order to heal them."

The German church is probably the most generous of any in the world church, and that was its contribution to the option for the poor, Rodriguez Maradiaga said.

"Could it be that no other local church in the world church is as generous and bestows as much aid as the German church? And that, too, is the option for the poor," he concluded.