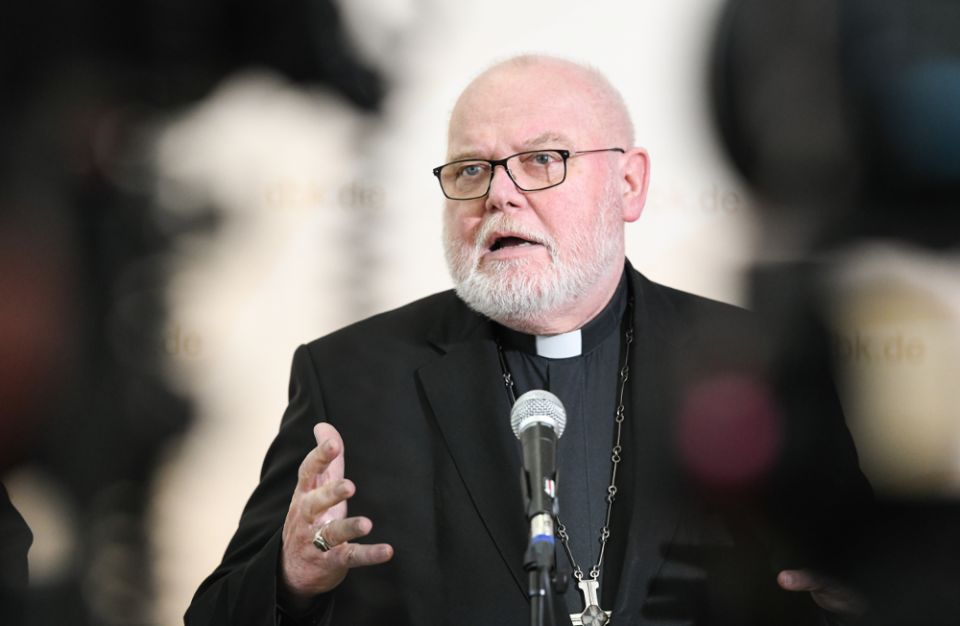 German Cardinal Reinhard Marx of Munich speaks during a news conference at the bishops' spring meeting in Lingen March 11, 2019. The sexual abuse scandal and demands for reform have changed the German church, the cardinal said at the end of the meeting. (CNS/Harald Oppitz, KNA)

The Catholic Church in Germany is at a point where serious debate — including on priestly celibacy and the role of women — and openness to doing things in a new way must be encouraged, said the president of the German bishops' conference.

The sexual abuse scandal and demands for reform have changed the German church, the cardinal said.

"The church in Germany is experiencing a break. The faith can only grow and deepen if we are liberated from blocked thinking, in order to pursue free and open debates and the ability to take new positions and go down new paths.

"The church needs a synodal advancement. Pope Francis encourages this," said Marx. "We will create formats for open debates and bind ourselves to proceedings that facilitate a responsible participation of women and men from our dioceses.

"We know about the cases of clerical abuses of power. It betrays the trust of people searching for firm footing and religious orientation. What must be done to achieve the necessary reduction of power and to construct a fairer and legally bound order will be to clarify a synodal path."

Germany's bishops said they are still working on how to move forward following the sexual abuse scandal and other pressing issues.

"Many voices can be heard saying that there must be a concrete list of measures. I can only say in reply that we have this catalog and we are still working on the points named there," Marx said.

During the meeting, the bishops heard the analyses and opinions of theology professors, female administrators within the church and church officials on issues pertaining to the sexual abuse crisis, church law, women in church administration and Catholic sexual morality.

"We treasure celibacy as an expression of religious commitment to God. How far it must adhere to the witness of priests in our church, we will find out," he said.

Marx also said Catholic sexual morality is in need of development. "We perceive that we are often not versed in questions regarding modern sexual behavior," he said.

The cardinal said he was aware that the results of the conference would not satisfy many people.

"Not all of the findings of our discussions will meet with your understanding," he said. "For this reason, we ask for your accompaniment in prayer, your support and your critical voice. Only thus can we advance together as the people of God."

He also acknowledged the widespread disillusionment among German Catholics.

"At this assembly, we have seen, heard and experienced that you, the believers in whose service we stand and with whom we feel bound in community, accompany our consultations with criticism," said Marx.

He thanked the faithful for their prayers and their criticism.

"We would like to tell you that we see and hear you. Your criticisms, worries, hardships, doubts and your demands," he said. "I tell you sincerely — we understand it."

Marx also commented on his experience attending the Vatican summit on protection of minors, convened by Pope Francis.

"It (the conference) was not about a hastily assembled list of measures, but rather a globally realistic view and the awareness: We bear responsibility to the victims across the whole world," he said. "None of us can negate or completely taboo the problem any longer."

During the conference, the bishops revealed that one of the steps in sexual abuse reform mandated by Germany's federal government has been postponed.

"We have postponed work regarding monitoring areas of intervention and prevention in recent months, not least of all because we just held a major Catholic-oriented symposium last November on the theme of monitoring," said Bishop Stephan Ackermann of Trier, spokesman for the bishops' conference on child abuse issues.

Ackermann explained that church officials, diocesan abuse prevention staff and an independent commission had participated in the previous year's discussion.

Accountability | Cardinal Marx: Church must have serious debate on celibacy, role of women

Vatican confirms investigation is underway of bishop for abuse, misconduct

Bishops around U.S. respond with 'sorrow' to abuse report, vow to act