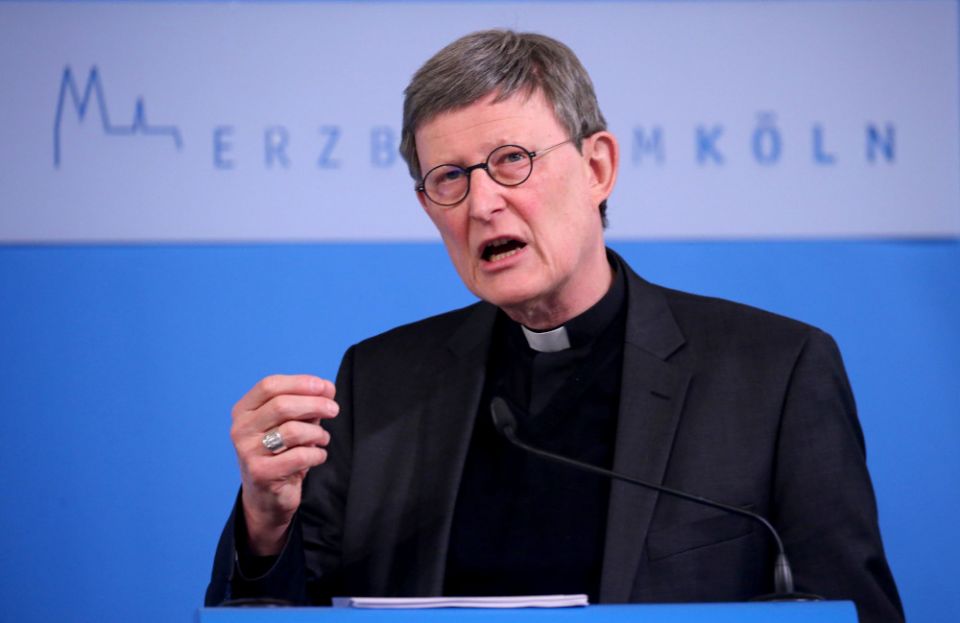 German Cardinal Rainer Maria Woelki of Cologne gestures during a news conference in Cologne March 23, 2021. The cardinal gave an update on the consequences and measures being taken after an independent report on the handling of abuse cases at the Cologne Archdiocese was released March 18. (CNS/Pool via Reuters/Oliver Berg)

COLOGNE, Germany — Cardinal Rainer Maria Woelki, 64, said he won't resign following the publication of the report on the handling of clerical sex abuse in the Archdiocese of Cologne.

"To simply take the moral responsibility with me and to go to protect the reputation of the office of bishop and of the church — I think that's too easy. And in my view it is also wrong," the cardinal said March 23. "Such a resignation would only be a short-lived symbol."

At a news conference, Woelki gave an update on the consequences and measures being taken after an independent report on the handling of abuse cases at the Cologne Archdiocese was released March 18. The German Catholic news agency KNA reported Woelki said he said he could only improve things from within his office.

"In [the] future, I will do everything I can to ensure that, if possible, no more mistakes can happen," he said.

The cardinal admitted that he had made himself culpable in his handling of abuse cases. He said that he knew from the abuse report that he had acted dutifully and legally in the case of the accused priest identified as O, KNA reported.

"But it's not just about doing the right thing, it's about doing everything humanly possible. And I didn't do that." It would have been better if he had reported the case to Rome, he said.

In another case, he should have suspended an accused clergyman much sooner, and he ignore the guidelines of the Congregation for the Doctrine of the Faith, KNA reported.

Asked about his moral responsibility stemming from possibly having known of abuse cases in his role as personal secretary to Cardinal Joachim Meisner and as auxiliary bishop of Cologne, Woelki stressed that he had not been confronted with the issue much at that time. As secretary, he said, he had not been involved in personnel matters, "at least not as far as abuse was concerned." As auxiliary bishop, he had been a member of the personnel conference, but he said the cases were never discussed in concrete terms there.

KNA reported Woelki offered a personal conversation with each of the more than 300 victims of sexual abuse named in the report.

"Come if you want and I will try to listen to you," he said. But he added that he could also understand anyone who did not want to talk to a representative of the church after their terrible experiences.

The cardinal also called for changes to church law which must "regulate the handling of sexual abuse more precisely and clearly." For example, the statute of limitations for sexualized violence must be extended, and contradictions in church law and in the guidelines of the German bishops for dealing with cases of abuse must be eliminated, the cardinal said. He also criticized that acts of abuse by priests were still seen in church law only as a violation of the pledge of celibacy.

"This is an eternal continuation of the wrong perspective," he said.

Woelki also promised to ensure that no more files would be destroyed in the Archdiocese of Cologne. He had already ordered this, and "in doing so, I am absurdly breaking current church law."

"It must not and it will no longer be possible for pages to disappear from files and for entire files to vanish out of cabinets." Files must never be manipulated, he added.

The report by the law firm Gercke Wollschläger showed that in 24 of the 236 files studied, an investigation found 75 breaches of duty by eight officials, including archbishops, vicars general and personnel managers.

Among those accused of such breaches are Hamburg Archbishop Stefan Hesse, 54, and Cologne Auxiliary Bishop Dominik Schwaderlapp, 53, who have already offered their resignations to Pope Francis, as well as two former archbishops of Cologne, now deceased: Cardinals Joachim Meisner and Joseph Höffner. Woelki was not incriminated.