Convicted bishop is Catholic hierarchy's elephant in the room 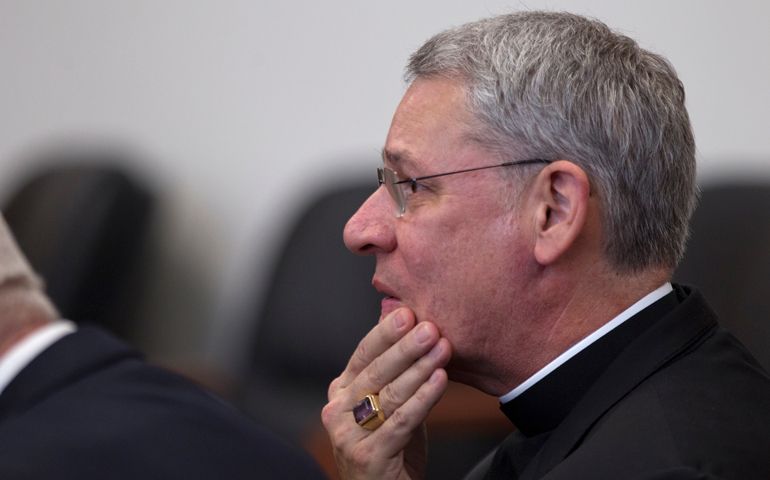 As the U.S. Conference of Catholic Bishops gathers for its annual fall meeting Nov. 12-15 in Baltimore, one of the biggest issues confronting the prelates won't be on the formal agenda: how to cope with the re-election of a president whose policies many bishops denounced as unprecedented attacks on the Catholic church.

But another topic not on the agenda may loom just as large for a hierarchy hoping to wield influence in the public square. In September, Bishop Robert Finn of Missouri became the first bishop to be found guilty of covering up for a priest suspected of child abuse.

Unlike President Barack Obama's election, however, Finn's status isn't a subject the churchmen are eager to discuss.

The verdict against Finn, leader of the Diocese of Kansas City-St. Joseph and an outspoken conservative, initially prompted widespread calls for his resignation, a Vatican suspension or discipline from his fellow bishops.

Yet in the two months since Finn's conviction, no bishop or church authority has addressed his case, nor has anyone spoken to Finn privately, according to Jack Smith, Finn's spokesman.

"Bishop Finn will be attending the USCCB meeting, as he has been fulfilling all of his responsibilities as Bishop of Kansas City-St. Joseph," Smith wrote in an email. "Bishop Finn and the Diocese, through its Office of Child and Youth Protection, are actively engaged in fulfilling the terms of probation."

Smith added that Finn did not intend to address the bishops either in their public or closed-door sessions. USCCB officials also said there were no plans by conference leaders to raise the issue of Finn's status.

By remaining silent on the issue, critics say the bishops are not only undermining their own policies -- Finn heads a diocese yet would not be allowed to teach Sunday school in an American parish under the USCCB's rules -- but they are undermining their credibility and their claims to have learned from the devastating scandal.

"Nothing has changed over the past 10 years," said Anne Burke, an Illinois state Supreme Court justice and an original leader of the National Review Board, a blue-ribbon panel of lay Catholics that the USCCB set up in 2002 to hold the bishops accountable.

Burke said the yawning hole in those policies is the lack of any mechanism for disciplining bishops who violate the charter, as the collection of child safety measures is known. While the bishops pledged to "apply the requirements of the charter also to ourselves," they have shown no willingness to do so, she said.

"They've never done anything before so why should we expect them to do anything now?"

David Clohessy of SNAP, the leading victims advocacy group, agreed. "Our secular justice system has punished his wrongdoing, but the full Catholic hierarchy has ignored his wrongdoing," he said of Finn. Clohessy said SNAP -- the Survivors Network of those Abused by Priests -- was writing to Finn asking him to stay away from the Baltimore meeting as a sign of contrition.

There may be one opening for movement on the issue next week: Al J. Notzon III, current head of the 16-member National Review Board, said the board will be meeting in Baltimore and will talk about the problems raised by the Finn case.

"We will be discussing the issue of accountability and one of the issues we will be pressing is the issue of timely reporting," Notzon said Thursday.

Notzon declined to say whether the board would address Finn's case directly, but said that after their meeting they would then meet with the bishops' Committee for the Protection of Children and Young People, headed by Bishop R. Daniel Conlon of Joliet, Ill.

Last August, Conlon told a conference of church workers who oversee child safety programs in American dioceses that the hierarchy's credibility on fixing the abuse problem is "shredded."

At the bishops' spring meeting in Atlanta in June, Notzon also warned some 200 bishops that they must follow their own policies against abuse more rigorously. "No one can no longer claim they didn't know" about what is required to protect children, Notzon said then.

On Sept. 6, Finn was found guilty of a single misdemeanor count for not telling police that one of his priests, Fr. Shawn Ratigan, had taken hundreds of lewd images of children in Catholic schools and parishes.

Evidence introduced by prosecutors showed that Finn, 59, had received numerous complaints about Ratigan's behavior over the course of a year, starting in December 2010, and did not tell authorities even after Ratigan attempted suicide. Ratigan, 46, subsequently pleaded guilty to federal child pornography charges.

Kathleen McChesney, a former FBI agent who was the first head of the USCCB's Office of Child and Youth Protection, agreed that the bishops have to discuss what happened and why in the "egregious" Ratigan case. And she said the best bishop to start that discussion would be Finn himself.

"The greatest gift he could give other bishops and the children is to come forward and talk about what happened," said McChesney, who now works as a consultant on child safety issues and often advises church groups and religious orders.

"What's at stake is continued disgruntlement, despair, and a lack of confidence and faith in the bishops," she said.

National collections hurt when dioceses drop or combine them

Accountability | Convicted bishop is Catholic hierarchy's elephant in the room