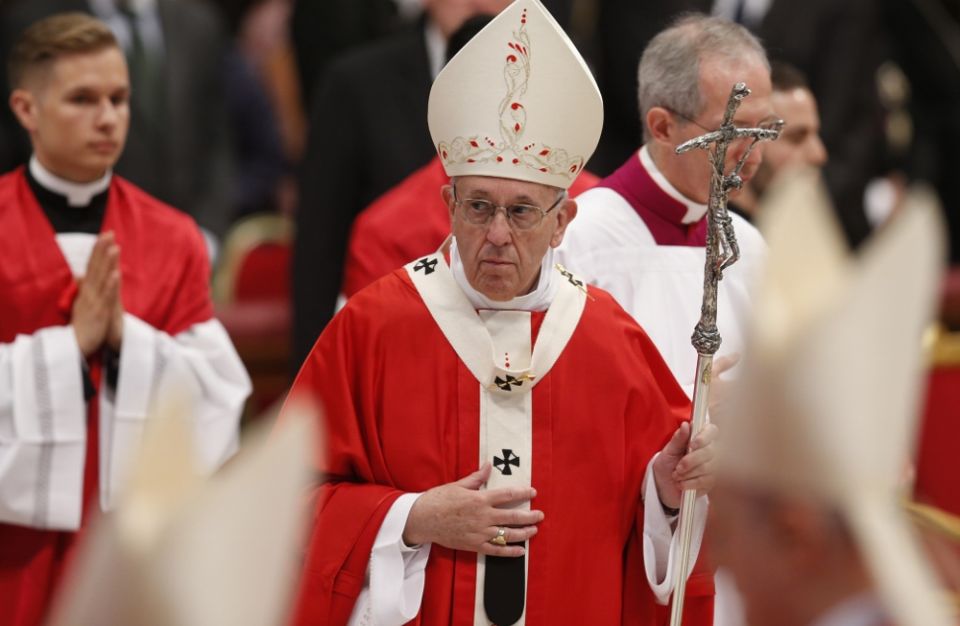 Pope Francis leaves after celebrating Mass marking the feast of Pentecost in St. Peter's Basilica at the Vatican May 20. (CNS/Paul Haring)

Recent weeks have seen several milestone events in the Catholic Church's decadeslong struggle to come to terms with the scandal of clergy sexual abuse and its cover-up by the hierarchy. The headline event was the mass resignation of the Chilean episcopate May 18. While at press time Pope Francis had not yet formally accepted any of the resignations and the full implications of the resignations are still being sorted out, the significance of the event cannot be in doubt.

The contrast between the meeting of Chile's bishops and Francis in mid-May and Francis' encounter with journalists in late January could not be starker. In January, Francis twice, very publicly, dismissed the testimony of abuse survivors. He accused them of "calumny" against bishops they accused of ignoring reports of abuse and covering up for abusing clergy.

Within days of making those statements, however, Francis had appointed Archbishop Charles Scicluna of Malta to investigate the situation in Chile. By April, Francis had received a 2,300-page report, and in an extraordinary public letter, the pope admitted — confessed may be a more appropriate word — making "grave errors" in judgment about Chile's sex abuse scandal. He invited the survivors he had disparaged to Rome to beg their forgiveness and he summoned the bishops to discuss repairing the damage from the scandal.

Over a long weekend at the end of April, Francis met at the Vatican with three Chilean abuse survivors individually and as a group. Later the survivors told the press that the pope had been "attentive, receptive and very empathetic." One said Francis told him: "I was part of the problem. I caused this and I apologize to you."

Francis then met with the bishops of Chile over three days for what must have been a difficult but frank discussion. After those meetings, the bishops resigned en masse.

This series of events is a personal milestone for this pope. Francis' admission that he was wrong was stunning in its honesty. His determination to correct the mistakes is a powerful personal witness and a teaching moment for the whole church.

Francis' determination to correct the mistakes is a powerful personal witness and a teaching moment for the whole church.

These are signs that the voices of the multitude who have stood knocking on the church door demanding justice are being heard. It has taken decades, thousands of sacrifices and untold suffering, but — finally — real change is apparent. Accountability is overtaking impunity.

Watching this incident unfold from January to May underscores the need for Francis to revisit the proposal he made in the summer of 2015 to establish a tribunal that would hold responsible bishops and religious superiors who mishandle cases of clergy sex abuse. At that time, we hailed this announcement, declaring, "Bishops who perpetuated and extended this scandal by covering up, dismissing or ignoring abuse are going to be held accountable." But we also warned that "an entrenched bureaucracy ruled by ancient customs of privilege and status" would resist such a tribunal.

A year later, Francis added to the list of "grave causes" for which a bishop could be removed from office "negligence of bishops in the exercise of their office, particularly relative to cases of sexual abuse against minors and vulnerable adults." That came in a papal document, Come Una Madre Amorevole ("Like a loving mother"), but there was no tribunal. The powers and duties envisioned the year before for a tribunal that could investigate and judge bishops and heads of religious communities for negligence causing "physical, moral, spiritual or patrimonial" harm were dissipated among "the competent congregation of the Roman Curia."

The spring and summer of 2015 saw the resignations of three U.S. bishops who had been implicated in civil courts for failing to report child abuse: Bishop Robert Finn of Kansas City-St. Joseph, Missouri, and Archbishop John Nienstedt and Auxiliary Bishop Lee Piché of St. Paul-Minneapolis. Those resignations only came after years of public agitation by local Catholics, media attention and intense internal lobbying.

As dramatic as the resignations of the Chilean bishops are, the actual process for obtaining them differed little from the process that forced Finn, Nienstedt and Piché to resign. The church still has no system and no independent authority to investigate and hold accountable bishops and religious superiors who enable abuse.

The shock of these mass resignations creates an opportunity and momentum that Francis should seize upon to implement the tribunal he proposed three years ago. No more delays. He should act now.

A version of this story appeared in the June 1-14, 2018 print issue under the headline: Pope should seize resignations’ momentum .