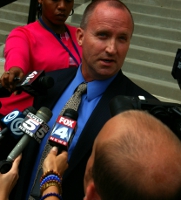 KANSAS CITY, Mo.-- The priest whose arrest last year led to the first criminal charges against a Catholic bishop in the church's decades-long clergy sex abuse crisis pleaded guilty Thursday to federal charges of possession and production of child pornography.

Fr. Shawn Ratigan, a Kansas City-St. Joseph, Mo., diocesan priest pleaded guilty to five of 13 counts of producing and attempting to produce sexually graphic material of minor girls. Ratigan’s May 2011 arrest raised questions about when his diocese and its bishop, Robert Finn, first became aware of concerns against him.

While a sentencing date has not been set for the priest, each charge separately carries between 15 and 30 years in prison.

Speaking on the steps of the federal courthouse in Kansas City following Ratigan’s plea, David Ketchmark, the Acting U.S. Attorney for the Western District of Missouri, said he would recommend a “virtual life sentence” for the priest.

“When a defendant who wears a religious collar, who has the trust of his community, engages in conduct of this nature, his crimes are more devastating and more reprehensible,” said Ketchmark. “With today’s guilty pleas...there’s assurance that [Ratigan] will face stiff...and tough penalties and he won’t have an opportunity to harm another child.”

Ratigan had originally pleaded not guilty to the charges. Ketchmark said the prosecution had decided to drop the additional eight charges against the priest with his guilty plea in order to spare the young victims’ the ordeal of trial, but that the remaining counts “will be argued by the government as relevant conduct” at sentencing.

Each of the eight counts that were dropped involved different incidents involving the same children as the other five.

Ratigan’s plea Thursday brings to a closure of sorts one chapter in a case which has roiled the local Catholic diocese.

Following the priest’s arrest, local prosecutors also brought separate charges against Finn and the Kansas City diocese of failure to report suspected child abuse, which are criminal misdemeanors, regarding their oversight of the priest.

County prosecutors say both Finn and the diocese should have reported Ratigan to police as early as December, 2010, when they acknowledge becoming aware of lewd images of children on his laptop.

Both Finn and the diocese have pleaded not guilty to the charges. They are currently set for trial in September.

Before accepting Ratigan’s guilty pleas inside the courtroom Thursday, U.S. District Judge Gary Fenner read through each of the five counts against the priest, describing what Ratigan was accused of doing to each of the children, sometimes using graphic language to identify specifically what parts of the body the priest had touched to position them for his photographs.

Following the descriptions of each count, the judge asked if Ratigan had “in fact” done as he was accused.

Ratigan, who appeared in an orange jumpsuit with shackles around his hands and waist, replied to the judge each time with a curt, “Yes, your honor.”

The charges to which Ratigan pleaded guilty involved girls between the ages of two and nine, and dated to incidents which took place during the years 2005-2009.

Ratigan remains in federal custody pending a pre-sentencing investigation, after which a sentencing date will be set.

An area attorney who represents several of Ratigan’s victims in civil suits being brought against the priest read from a statement prepared by families’ of the victims that said the families were “happy that this chapter is coming to a close without our children being identified or having to testify in the trial process.”

“We are glad that Shawn Ratigan is taking ownership for his actions and we appreciate the sensitivity with which the prosecution has treated our children and we ask that you also maintain our anonymity as we all begin to heal,” attorney Rebecca Randles read from the statement outside the courthouse following Ratigan’s guilty pleas.

Randles also said that a number of the victims’ families were in the courthouse for Ratigan’s pleas.

Jack Smith, the interim director of communications for the Kansas City-St. Joseph diocese, said Thursday the diocese was reiterating a statement it made Wednesday that said it “expresses its profound concern for anyone who may have been harmed by Shawn Ratigan and urges prayer for all affected by his actions.”

In a brief interview Wednesday, Smith said that Finn had not discussed Ratigan’s change of plea with the priest.

Ratigan faces similar charges of possession and production of child pornography in a pending case in Clay County, Mo., where the parish he last served as pastor is located.

In a separate agreement with prosecutors in that county in November, prosecutors there suspended misdemeanor charges against Finn in the case so long as the bishop agreed to give the prosecutors immediate oversight of the diocese's sex abuse reporting procedures in their county.

As part of the agreement, Finn agreed to monthly meetings with Clay County prosecutor Daniel White to discuss all reported suspicions of abuse in the county, one of 27 the diocese spans in western and northwestern Missouri.

Following Ratigan’s arrest in May, 2011, Finn has acknowledged several times that he and the diocese had made failures in its handling of the priest.

After receiving the report in December, 2010, that Ratigan had kept lewd images of children on his laptop, Finn sent the priest out of state for a psychological evaluation. Ratigan had attempted suicide on learning the diocese had become aware of the images.

After Ratigan’s return to Missouri, Finn arranged for him to stay at a local community of women religious reportedly under the provision that he not have contact with children. After reports to the diocese that Ratigan had been seen at several events including children, Finn then says he reported Ratigan to police.

At one point, Finn was very forthright about his and the diocese’s failings in the case.

The day after the first news accounts of the priest’s arrest appeared in Kansas City, Finn visited the parish where Ratigan last served as pastor and told some 300 parishioners gathered there to hear from their bishop that he "should have done differently in this regard and I'm sorry."

Pope aims to cut down on corruption among Vatican managers