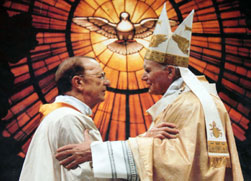 Maciel and Pope John Paull II. Under the new decree, such photos will not be displayed publically in Legionary houses.

ROME -- With the authorization of a papal delegate, the Legionaries of Christ have formalized in a new decree a number of reforms regarding the depiction of the order's founder, the late-Father Marcial Maciel Degollado.

"The decree formalizes in broad strokes what has for the most part already been general practice," said a statement posted Dec. 11 on the Legionaries of Christ website.

Legionaries Father Alvaro Corcuera, director general of the order and of the order's lay association, Regnum Christi, issued the norms following authorization by Cardinal Velasio De Paolis, the papal delegate in charge of governing the Legionaries and helping reform the order.

The decree, promulgated Dec. 6, forbids the placement of photographs of Father Maciel "alone or with the Holy Father" anywhere in Legionary or Regnum Christi centers.

However, out of respect for individuals' personal freedom, it said members of the order and its lay association "may privately keep a photograph of the founder, read his writings or listen to his talks."

Maciel's "personal writings and talks will not be for sale in the congregation's publishing houses, centers, and works of apostolate," it said, but "the content of these writings may be used in preaching without citing the author."

Maciel may be referred to only as "founder of the Legion of Christ and Regnum Christi" or "Father Maciel" in the institution's writings and communications, it said.

"Dates having to do with his person -- birthday, baptismal day, name day, and priestly ordination anniversary -- are not to be celebrated," it said.

Yet, the anniversary of his death, Jan. 30, "will be a day dedicated especially to prayer," said the order.

Maciel's burial place in his hometown of Cotija, Mexico, "will be given the value that pertains to any Christian burial place," it said, and will be "treated as a place of prayer for the eternal repose of the deceased."

The retreat centers in Cotija will remain open, providing the same services, "but a place for prayer, reparation, and expiation will be created there," said the statement.

Corcuera said, according to the statement, that it was his hope the reforms would help the order's members "focus on the person of Christ and continue forward united in charity."

The decree was the latest in a series of reforms of the Legionaries of Christ after revelations that the late Father Maciel led a double life in violation of church teachings, abused seminarians and fathered several children.