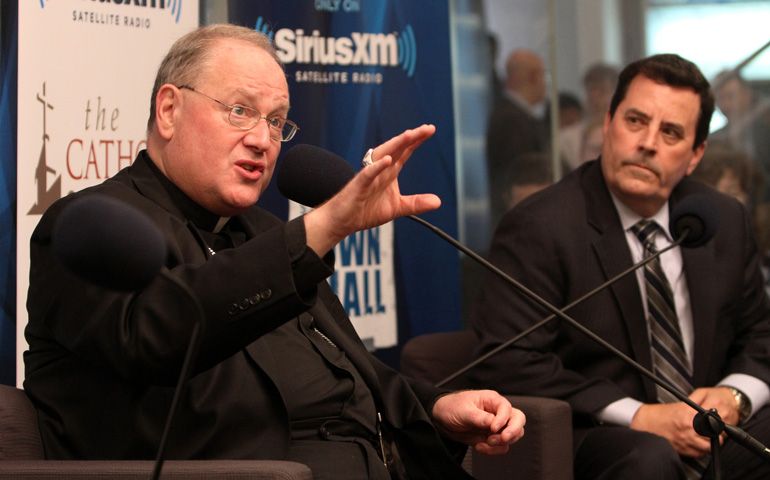 Milwaukee — The Milwaukee archdiocese has acknowledged it paid sexually abusive priests $20,000 to leave the priesthood without taking the laicization fight to the Vatican.

A reference to the payout policy was made in the minutes of a 2003 meeting of the archdiocesan finance council, headed by then Milwaukee Archbishop Timothy Dolan, now cardinal archbishop of New York and head of the U.S. Conference of Catholic Bishops.

The minutes, which were found in proceedings for the archdiocese’s 2011 bankruptcy filing, were made public Wednesday by the Survivors Network of those Abused by Priests (SNAP).

Peter Isely, SNAP Midwest director, noted the same document reported that the archdiocese had created a pastoral mediation program that would pay victims of sexual abuse by priests up to $30,000 to “make reparations for lost jobs, education, etc. due to the depression and other psychological effects of abuse,” the minutes state.

The money offered to the priests was given to them in two equal payments, the final one after they signed the formal laicization agreements. Isely demanded that the archdiocese reveal where the money to pay the priests came from.

“It was like a back alley drug deal,” Isely said.

Isely labeled the payments to priests as payoffs, something Julie Wolf, the archdiocesan communications director, said was a false characterization.

“There was a loud outcry to remove these priests quickly,” Wolf said in a phone interview. “The end result was that the payments sped up the laicization process.”

In the past, former Milwaukee Archbishop Rembert Weakland and others have decried the laicization process as being expensive and taking years to complete.

Wolf also said the payment to the priests was reported in at least one case, that of Franklyn Becker, who left the priesthood in 2006. At the time, Dolan told the Milwaukee Journal Sentinel that the payments were an act of charity to cover Becker’s health insurance until he could obtain Medicare.

Ten victims accused Becker of abuse in 1983. At the time he left the priesthood, Becker was 69.

Wolf said she does not know how many priests were given the payments, which she said were intended to help them transition into lay society. A list of priests who were credibly accused of abuse is posted on the archdiocesan website. Sixteen are listed as laicized, with 14 of those still living.

In a letter written to Archbishop Jerome Listecki, Dolan’s successor, following news of the payments to accused priests, Isely noted the church filed for bankruptcy just months after the July 2011 document was written.

“The federal bankruptcy court would never have allowed payments to pedophiles as part of a restructuring plan, much less unrestricted payouts,” Isely said in the letter to Listecki. “And while you and Cardinal Dolan and [Auxiliary] Bishop [Richard] Sklba seemed to have no qualms in negotiating with pedophiles, instead of proceeding with mediation for the restitution of hundreds of victims who filed in bankruptcy, you have proposed that the archdiocese be allowed to set up a limited therapy fund operated, of course, by church officials.”

The first mediation program set up by the church -- the one referred to in the 2003 finance council minutes -- was an attempt to maintain the church’s solvency while dealing with needs of the victims.

“There could be hundred[s] of legitimate victims asking for $30,000 each,” read the minutes of the meeting. “Since this cannot be taken from [Catholic Stewardship Appeal], how would it be funded? If the costs become too great, they would have to be borrowed.”

The minutes went on to say the worst-case scenario would force the archdiocese to liquidate property.

The worst-case scenario was realized three years later, when an agreement was reached involving 10 victims of sexual abuse in California regarding two Wisconsin priests, Becker and Siegfried Widera, who were moved to California after allegations of abuse surfaced in Wisconsin.

When insurance covered about half of the California settlement, the archdiocese announced it would sell the Archbishop Cousins Catholic Center, a former seminary high school that now serves as archdiocesan headquarters.

While the center was placed on the market, it did not sell. The archdiocese mortgaged the property to pay the settlement.

In the bankruptcy filing, the archdiocese states it never owned the Cousins Center and it should not be a part of funds available to the nearly 600 victims who filed claims as part of proceeding. (The archdiocese has sought to exclude most of those claims.)

Other funds are in trusts for cemeteries and parishes, and only $7 million is subject to the bankruptcy, say court filings made on behalf of the archdiocese.

A pair of Wisconsin Supreme Court decisions in the mid-1990s protected the church from lawsuits based on negligence. In 2007, the court ruled that the church could be sued for fraud if it knowingly covered up abuse by priests. Subsequent court decisions found that insurance did not cover fraud, an intentional act. Lawsuits brought by 23 victims against the archdiocese prompted the 2011 bankruptcy filing.