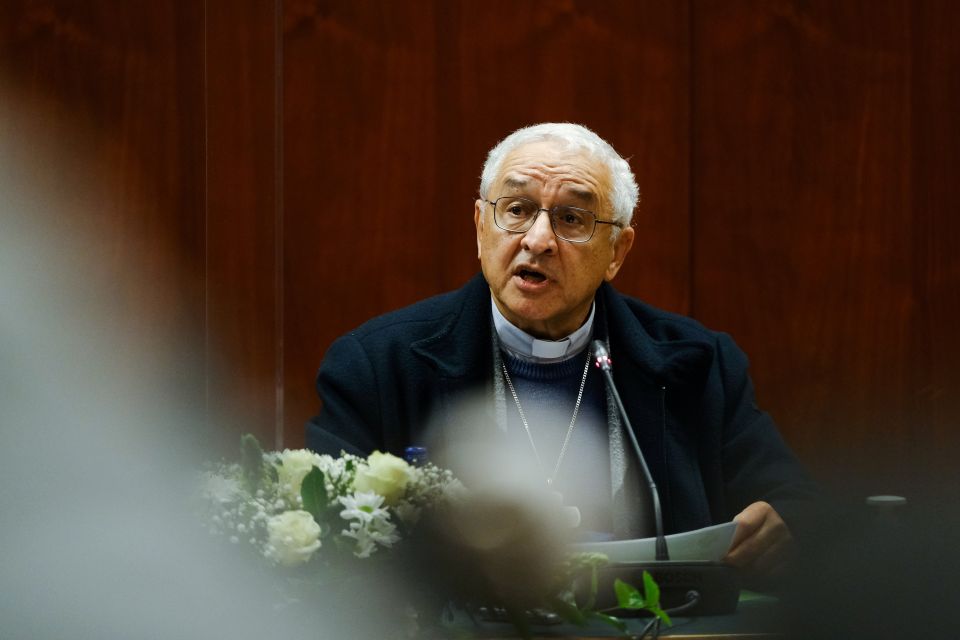 Bishop José Ornelas Carvalho of Setúbal, president of the Portuguese bishops' conference, announces the creation of a national commission to support local dioceses in their investigations into current and historic cases of sexual abuse, in Lisbon Dec. 2, 2021. (CNS photo/Pedro Nunes, Reuters)

LISBON, Portugal — A lay committee looking into historic child sex abuse in the Portuguese Catholic Church said Thursday that during its first month of work it received allegations from 214 people.

The allegations are from people born between 1933 and 2006 and tell of psychological torment kept secret for decades, the Independent Committee for the Study of Child Abuse in the Church said.

"This suffering is associated with feelings of shame, fear, guilt and self-exclusion, reinforcing the idea of lives where the sensation of 'standing on the sidelines' was always present," the committee said in a statement.

Portuguese church officials said two years ago that authorities had investigated only about a dozen allegations of sexual abuse involving Portuguese priests since 2001. More than half of those cases were dropped because church investigators decided there wasn't enough evidence to pursue them.

The six-person committee, which includes psychiatrists, a former Supreme Court judge and a social worker, promises anonymity for anyone who comes forward. It officially began its work on Jan. 1.

The committee, which will report to the Portuguese Bishops' Conference at the end of the year, says its task is to study what child sex abuse has occurred, not launch formal investigations.

Many of the allegations suggest a strong possibility that other children may have been victims of the same abuser, the statement said.

The witness statements were received online, with alleged victims filling in a form on the committee's website, or by phone or in face-to-face interviews.

Allegations came in from across the country, the committee said, as well as from Portuguese now living in the United States, Canada, United Kingdom, France, Luxembourg and Switzerland, where there are large Portuguese immigrant communities.

Because most statements were received online, the committee is stepping up its efforts to reach people in less developed areas of the country who may not be used to using technology.

It is recruiting the help of charities, civic associations and parish councils, among others, to hep get the word out.

What a difference a week makes