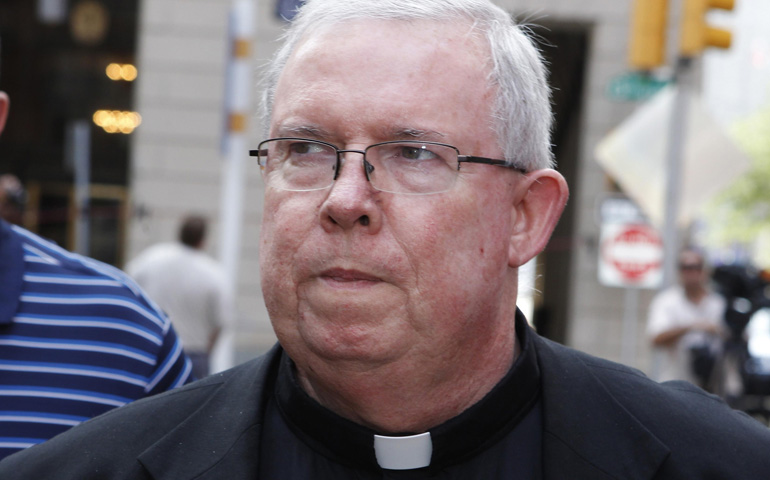 Free from prison and living under house arrest since a December 2013 court ruling, Msgr. William Lynn's freedom appeared to be in jeopardy again.

The case of the former secretary for clergy of the Philadelphia archdiocese, the highest-ranking church official in the archdiocese convicted of a crime connected to the clergy sexual abuse crisis, took a dramatic turn Monday when the Pennsylvania Supreme Court overturned a lower court's ruling that had released him on bail.

It remains unclear whether the Philadelphia District Attorney's Office will press to revoke Lynn's bail and return him to a Northeast Pennsylvania prison pending appeals to the ruling.

Lynn, 64, had been convicted of endangering the welfare of a child in a landmark 2012 trial. In his position, he had supervised clergy on behalf of Cardinal Anthony J. Bevilacqua, including former priest Edward Avery, who pleaded guilty to sexually assaulting a 10-year-old boy in 1999 and is serving a five-year prison sentence.

After Lynn served 18 months of his three- to six-year sentence at Waymart State Prison, his conviction was overturned by the state Superior Court in December 2013. He subsequently took up residence with electronic monitoring at St. William Parish rectory in Northeast Philadelphia.

Lynn's defense contended he should not be convicted retroactively according to a 2007 amendment to a 1995 child endangerment law when he was a supervisor if priests. He held the position through 2004.

Supreme Court Justice Max Baer, writing an opinion in the majority 4-1 decision handed down Monday, said at issue was if the "plain meaning" of an earlier 1995 statute on endangering the welfare of a child "clearly encompassed the class of persons added by the 2007 amendment" -- supervisory persons such as Msgr. Lynn -- "and the amendment merely clarified, rather than changed, the [1995] statute's scope of liability."

The three-judge Superior Court unanimously ruled the law's scope was limited, and did not apply to Lynn while he was a supervisor. The Supreme Court countered that he was culpable under the 1995 law.

In his 60-page opinion, Baer devoted 40 pages to recounting lurid Philadelphia grand jury testimony of clergy sexual abuse that was the basis for the 2012 trial of Lynn, showing evidence of his responsibility as a supervisor of priests and for ensuring the welfare of children. The court agreed with the 2012 trial jury that Lynn failed to properly supervise Edward Avery and ensure the welfare of his victim.

The opinion faulted the superior court's disregard of "plain and unambiguous" language of the 1995 statute in that "it is not the child that [Lynn] must have been supervising, but the child's welfare, including that of [Avery's victim]," Baer wrote.

However, the law's intent was not clear to Chief Justice Thomas G. Saylor, who cast the lone dissenting vote in the decision. Despite the majority, he maintained that the 2007 amendment's language should not apply to Msgr. Lynn's case.

Saylor said Lynn "may have been substantially derelict in his obligations," but "there were no facts placed before the jury by which it could reasonably conclude he affirmatively intended that children's welfare be endangered."

Lynn's attorneys reportedly were considering appeal options, including a petition to the U.S. Supreme Court.