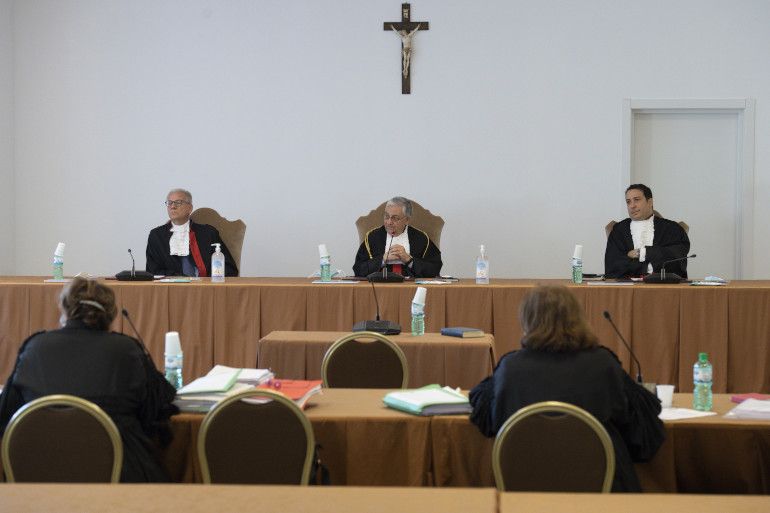 Judges are pictured in the new multifunction room at the Vatican Museums during the trial of two priests by the Vatican City State court June 7, 2021. (CNS photo/Vatican Media)

Vatican City — Several priests, some of whom were former students at a minor seminary located in the Vatican, testified at the ongoing trial of Fr. Gabriele Martinelli, who is accused of sexually abusing a younger student at the St. Pius X Pre-Seminary.

The priests -- Frs. Giuliano Zanotta, Daniele Pinton, Giampaolo Cozzi and Ambrogio Marinoni -- described Father Martinelli's influence at the minor seminary, as well as that of his mentor and former rector of St. Pius X, Msgr. Enrico Radice, and L.G., the victim who is also a former student. Also testifying was Deacon Alessio Primante.

The June 7 session was the 10th of the trial, which began in October. Giuseppe Pignatone, president of the Vatican City State tribunal, said the court would listen to three more witness July 15 and possibly hear arguments July 16 before the court adjourns for the summer.

The trial would resume after the summer recess ends Sept. 20.

Radice is also on trial and is accused of hindering the investigation into the abuse allegations. The seminary and the Opera Don Folci, the religious institution that runs the minor seminary, are accused of failing to protect the young students.

While Cozzi, Primante and Zanotta told the court they had not witnessed Martinelli acting inappropriately, Marinoni said he told Vatican prosecutor's in 2018 that he witnessed the priest leave another student's room late one night.

Marinoni, who worked as a teacher as well as in the minor seminary's bursar's office, said he reported the behavior to Radice, who questioned the students who were in the room and determined that nothing unusual had occurred.

However, most of the priests testified that Radice held Martinelli in high regard when he studied there. While Primante described the relationship as paternal, Marinoni said the former rector's favoritism created a "polarized situation in the seminary, all focused on his teacher's pet, Martinelli."

"We priests counted for less than nothing, certainly less than Martinelli, who imposed himself with ease. I was an educator, but only on paper; my position was not recognized by the boys," he said.

If gay priests, religious can't be celibate, they should leave, pope says