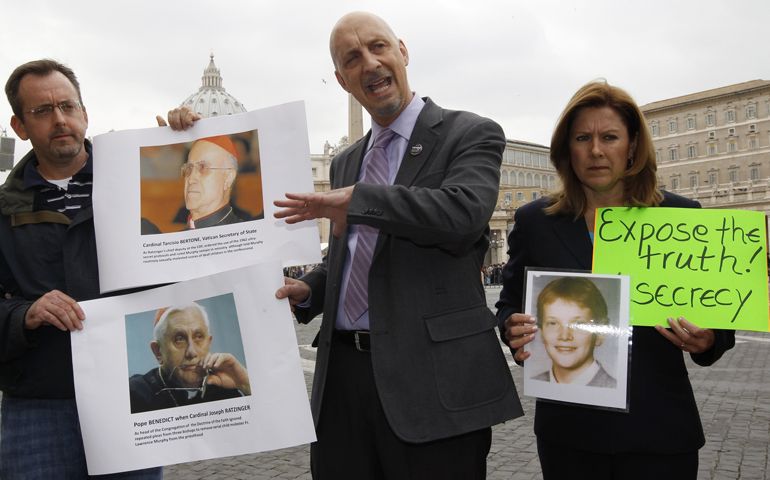 The founder of a prominent advocacy group for children sexually abused by Catholic priests has resigned, the second major departure in the wake of a lawsuit filed last month by a former employee alleging that the organization colluded with lawyers to refer clients and profit from settlements.

In an email to supporters Barbara Blaine said her decision to leave SNAP, which stands for the Survivors Network of those Abused by Priests, had nothing to do with the legal action.

“(P)lease know that the recent lawsuit filed against SNAP, as the others in the past which have no merit, had absolutely no bearing on my leaving,” Blaine, herself a victim of clergy abuse as a child who started SNAP 29 years ago, said in an email sent on Saturday. “The discussions and process of my departure has been ongoing.”

Blaine’s resignation was effective a day earlier, on Feb. 3.

More: Barbara Blaine in her own words describes how she came to found SNAP (July 6, 2015)

The surprise announcement comes less than two weeks after David Clohessy, SNAP’s executive director and also a fixture in the organization for nearly 30 years, announced he too was leaving.

Clohessy and SNAP officials had also insisted that his departure had been in the works for months and had nothing to do with do with the lawsuit, filed in Illinois on Jan. 17.

The lawsuit by Gretchen Rachel Hammond names Blaine, Clohessy and other SNAP leaders as defendants and alleges that “SNAP does not focus on protecting or helping survivors – it exploits them.”

The group, which more than any other is responsible for revealing the scandals that have continued to rock Catholicism in the U.S. and around the world, “routinely accepts financial kickbacks from attorneys in the form of ‘donations,’” Hammond alleges.

Hammond, who worked on fundraising for SNAP from 2011 until 2013, said she feared reprisals from SNAP leaders over her objections to the lawyers’ payments and suffered serious health problems as a result. She says she was fired in 2013, allegedly because she confronted her bosses over their practices with victims’ attorneys, and that the dismissal has hurt her career.

It’s long been assumed that SNAP received substantial donations from some of the high-profile attorneys who specialize in these cases and who have won multimillion-dollar settlements from the Catholic church in the U.S. and its insurance companies.

SNAP officials have from the outset denied Hammond’s claims.

In a statement Wednesday, SNAP board chair Mary Ellen Kruger said that victims who come to SNAP are indeed often referred to attorneys “in an effort to bring accountability to those that have condoned and perpetuated this abuse for decades.”

But she said the donations from the attorneys have no connection to those referrals.

“Like all nonprofits, SNAP solicits and accepts donations from anyone who believes in our cause,” Krueger said.

“This includes individuals from all walks of life. This has also included attorneys who have filed lawsuits against priests and ‘the system.’ To be clear, SNAP has never and will never enter into any ‘kickback schemes’ as alleged by Ms. Hammond in her lawsuit, nor has SNAP ever made donations an implied or express condition of the referral of victims.”

In her email to supporters, Blaine portrayed the personnel moves as part of SNAP’s natural transition “from a founder led organization to one that is board led.”

“I have every confidence that the strength you and the board members have shown as survivors will keep the organization strong,” she wrote.

Georgetown panel deals with 'moral catastrophe' of church's own making

SNAP is wrong to discourage victims from meeting the pope