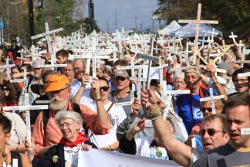 COLUMBUS, Ga. -- The 22nd annual SOA Watch gathering at the gates of Fort Benning drew its smallest crowd in more than a decade Saturday and Sunday. The lower turnout did not faze organizers but left some venders feeling the sting of lower profits.

The protest calling for the closure of the Western Hemisphere Institute for Security Cooperation drew about 4,000 people each day to the gates of the Army post where, since 1946, tens of thousands of Latin American soldiers have been trained at the former School of the Americas. Graduates have been implicated in human rights violations, torture and killings in their native countries, including the Nov. 16, 1989, deaths of six Jesuit priests, their housekeeper and her daughter in El Salvador, the massacre that serves as the catalyst for the protest.

The gathering included a Sunday morning "funeral" procession that serves as a memorial to those killed by the school's graduates. Actor Martin Sheen, a Catholic who was a regular at the SOA gathering in the late 1990s, was the headliner this year, speaking to the crowd Sunday morning. Sheen said he came to Columbus at the invitation of SOA Watch founder Fr. Roy Bourgeois, the embattled priest who has been in a two-year standoff with the Vatican for his active support of women's ordination.

"Well, all of us are here in large measure because of what (Bourgeois) chose to do," Sheen told NCR. "He chose to risk his life. He only asked us to just show up for a weekend. He's a powerful inspiration, not just in our movement, in our culture, but in our church."

This year marks the second SOA Watch gathering since a large contingent of Jesuit high school and college students decided to move their annual Ignatian Family Teach-In to Washington, D.C., so students would be able to include congressional lobbying as part of their effort to change U.S. foreign policy toward Latin America. The Jesuit pullout likely resulted in about 3,000 fewer people making the trip to Fort Benning. Bourgeois said the poor economy also may have kept folks at home.

Wes Hare, a vender and activist who has been hawking "Peace is Patriotic" T-shirts, hats and sweatshirts at the SOA Watch gathering for 11 years, said he only made $340 in sales this year, down from his sales of more than $1,000 in previous years, barely recouping the $300 cost of leasing the table space from SOA Watch.

While the Occupy movement might have siphoned off some folks from this year's gathering, Hare, a Presbyterian, blames the pope for this year's low numbers.

"I think the Pope has put a heavy burden on a lot of Catholic folks," Hare said. "He got after Fr. Roy and scared off the Jesuits, and that's a shame; that's tragic."

Hare said he fears the Maryknoll order is also abandoning Bourgeois and the SOA Watch campaign. At a small Maryknoll gathering for Mass and a meal Saturday night, Bourgeois was an invited speaker, though he did not attend the Mass. His talk dealt with the ongoing work of SOA Watch. He did not mention and was not asked any questions about women's ordination.

In an interview with NCR, Bourgeois said many of the SOA Watch regulars from the last two decades are growing older and finding it more difficult to make the long trip to the protest.

"What I've heard the last couple of years, some people have said, 'My bones can't take it anymore.' This is our 22nd year, and if you started here 20 years ago and you were 60, you're now 80," said Bourgeois, 72. "That, coupled with the economy. I hear this most often, that a lot of people have to cut back."

When he was in Rome for a Women's Ordination Conference gathering, the BBC did a dual interview with Bourgeois about his work with SOA Watch and women's ordination.

Sunday, Bourgeois looked at the cheering crowd and said he was still pleased with the turnout of youth at the gathering as Theresa Cusimano, 43, of Denver, scaled the Fort Benning fence with a ladder. She was the only activist arrested at the SOA protest. Several Jesuit schools, including St. Joseph's in Philadelphia, Xavier from Cincinnati and St. Louis University did send delegations of faculty and students.

St. Joseph campus minister Beth Ford, 34, brought a group of 18 students to the SOA Watch gathering. She also brought a smaller group of students to Washington, D.C., a week earlier for the Ignatian Family Teach-In.

Ford, who has been to the Ft. Benning witness seven times, said she had "mixed feelings" about the Jesuit decision to pull out of Columbus. While she sees value in bringing students to Washington, D.C., to lobby, she also thinks the SOA Watch weekend is important for the theological and political formation of her students.

"I think all the pieces are important, so there is something missing," she said. "I feel like the ideal is to have both experiences at some point for students in their four years. The students have consistently said that this experience in Ft. Benning -- especially at the vigil on Sunday -- is one of the most powerful experiences that they have at St. Joe's."

St. Joseph senior Mariana Fernandez, who was born in Mexico but is a U.S. citizen, agreed with Ford that both trips have value. She first came to the SOA Watch weekend as a high school junior and three more times with the St. Joseph's contingent.

"I do think there's going to be a lot missing from not coming here because it is very powerful. It is very meaningful," Fernandez said.

Catholic student Justin Bradshaw, 17, who attends Our Lady of Mercy Catholic High School in Fayetteville, Ga., a suburb of Atlanta, was at his first SOA Watch protest.

"Once we started processing, and we were saying Presente, I felt really a sense of solidarity -- not just with people that were here, but with the souls that were lost, so that was really, really cool," said Bradshaw, who drove to the gathering with another Mercy student, junior Tristen Cortez.

At Saturday's plenary, Beloit College freshman Osha Waterdu had a pained look on her face as torture survivor Mara Bard of Argentina told a horrifying story about killings in her country.

"People were killed," Bard told her audience. "They were put in a helicopter and were taken from there to the ocean and throw into the ocean. They thought the bodies won't float, but they were wrong. The bodies were coming to the shore."

After Bard's talk, Waterdu, the daughter of the Rev. Julie Waterdu, a Presbyterian pastor, said coming to the SOA Watch gathering was eye-opening. She found out about the SOA gathering from a campus peace and justice club.

"This is my first time here," she said. "I'm learning about a lot of the stuff that I wasn't aware of, and it's very shocking. It's just heart-wrenching that human beings can do that to other human beings, and I'm having sort of a hard time understanding that."

She's just 19, but Waterdu said she knows what she wants to do with her life.

"I want to fight for peace and justice and human rights in the world," she said.

Editor's Note:
The Ignatian Solidarity Network, which organizes the Ignatian Family Teach in for Justice reference above, asked us to include this note.

The Ignatian Solidarity Network (ISN) promotes leadership and advocacy among students, alumni, and other emerging leaders from Jesuit schools, parishes, and ministries by educating its members on social justice issues; by mobilizing a national network to address those issues; and by encouraging a life-long commitment to the “service of faith and the promotion of justice.” ISN is an independent 501c3 non-profit organization. Additional information can be found at: www.ignatiansolidarity.net