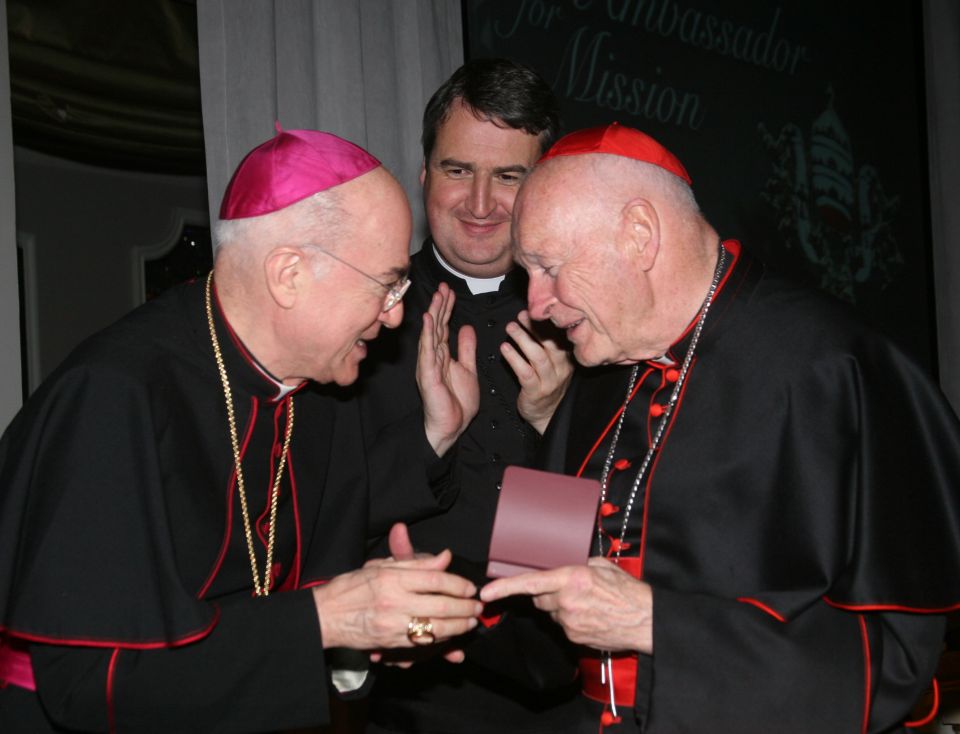 Archbishop Carlo Maria Vigano, then nuncio to the United States, congratulates then-Cardinal Theodore McCarrick of Washington at a gala dinner sponsored by the Pontifical Missions Societies in New York in May 2012. The archbishop has since said Cardinal McCarrick already was under sanctions at that time, including being banned from traveling and giving lectures. Oblate Fr. Andrew Small, center, director of the societies, said Vigano never tried to dissuade him from honoring the cardinal at the gala. (CNS/PMS/Michael Rogel)

Vatican City — Catholics in the pews and even priests in the Vatican are confused about the long document Archbishop Carlo Maria Vigano published claiming Pope Francis turned a blind eye to information he had about the sexual misconduct of Archbishop Theodore McCarrick.

Francis' response to journalists Aug. 26 that they should read the document carefully, investigate and make their own decisions was not a big help.

Littered with repeated accusations about a "homosexual current" of cardinals and archbishops close to Francis, the document's central claim is that Francis knew about McCarrick's abusive behavior as early as June 2013 and did nothing about it.

In fact, Vigano said, Francis, "in the case of McCarrick, not only did not oppose evil but associated himself in doing evil with someone he knew to be deeply corrupt. He followed the advice of someone he knew well to be a pervert, thus multiplying exponentially with his supreme authority the evil done by McCarrick."

Vigano states that in "2009 or 2010" Pope Benedict XVI "had imposed on Cardinal McCarrick sanctions similar to those now imposed on him by Pope Francis: the cardinal was to leave the seminary where he was living, he was forbidden to celebrate (Mass) in public, to participate in public meetings, to give lectures, to travel, with the obligation of dedicating himself to a life of prayer and penance."

But such a sanction was never announced publicly.

It could be that Benedict did not want to draw attention to behavior that was not public knowledge. But, as one canon lawyer at the Vatican told Catholic News Service Aug. 28, "at best it's weird, an anomaly" not to publish a sanction that has public consequences, such as forbidding the cardinal to celebrate Mass publicly or make public appearances.

Yet, McCarrick continued to celebrate Mass publicly in the United States and to visit the Vatican, even being part of group audiences with Pope Benedict and later Francis. Also strange is the fact that Vigano himself appeared at public events with McCarrick, including at a May 2, 2012, gala dinner of the Pontifical Mission Societies in the United States, which honored Cardinal as a "Pontifical Ambassador for Mission."

Oblate Fr. Andrew Small, director of the Pontifical Mission Societies, told Catholic News Service Aug. 29 that neither Vigano nor anyone from the nunciature tried to dissuade the societies from giving the honor to McCarrick.

Clearly, if there were sanctions, they were not enforced. But the question remains, were there sanctions and did Francis know about them before this summer when the Archdiocese of New York announced an investigation found credible evidence that McCarrick sexually abused a minor?

Cardinal Daniel DiNardo of Galveston-Houston, president of the U.S. Conference of Catholic Bishops, and many individual bishops have asked for a thorough investigation of the McCarrick situation, including Vigano's claims.

"The questions raised deserve answers that are conclusive and based on evidence," DiNardo said Aug. 27. "Without those answers, innocent men may be tainted by false accusations and the guilty may be left to repeat sins of the past."

In the eyes of many, the fact that Vigano consulted with and was even assisted by journalists and bloggers who have worked publicly to oppose and discredit Francis does not help his cause.

One of those involved was Aldo Maria Valli, author of the blog "Duc in Altum," which has been very critical of Francis since the publication of "Amoris Laetitia" on the family. Valli wrote Aug. 27 that Vigano called him more than a month ago wanting to talk to him. Valli invited the archbishop to dinner at his home.

"He was worried about the church and feared that at its top there were people who were not working to bring the Gospel of Jesus to today's men and women, but to sow confusion and give in to the logic of the world," Valli wrote.

As they walked to the archbishop's car at the end of the evening, Valli said Vigano told him, "Don't call me. I'll get in touch with you."

A month later, the archbishop called again. And during another dinner in the Valli home, "he cited the case of McCarrick, the former cardinal held guilty of serious abuse, and he let it be known that everyone -- in the USA and the Vatican -- knew about it for a long time, for years. And yet they covered it up."

The archbishop said he would send a document to Valli to read and to publish or not as he saw fit. Valli said he asked if it would be an exclusive, and Vigano told him, "No. I will give it to another Italian blogger, an Englishman, an American and a Canadian. There will be translations in English and Spanish."

They spoke later and agreed on the date and time of publication, Valli said. "He decided on Sunday, Aug. 26, because the pope, returning from Dublin, would have an opportunity to reply, responding to the journalists' questions on the plane."

The other Italian blogger and papal critic, former journalist Marco Tosatti, told the Associated Press that he helped Vigano edit the document for publication. The meeting Aug. 22, he said, came after a similar, earlier phone call and meeting like Vigano had with Valli.

After the Pennsylvania grand jury report came out, Tosatti told AP that he told Vigano, "I think that if you want to say something, now is the moment, because everything is going upside-down in the United States. He said 'OK.'"

The National Catholic Register, which is owned by EWTN, and the Canada-based LifeSiteNews also received the text in advance. The LifeSiteNews Rome-based writer did the official translation of Vigano's document into English.

The Register reported Aug. 25 that it had "independently confirmed that the allegations against McCarrick were certainly known to Benedict, and the pope emeritus remembers instructing Cardinal Bertone to impose measures but cannot recall their exact nature." Cardinal Tarcisio Bertone was Vatican secretary of state.

But Archbishop Georg Ganswein, the retired pope's personal secretary, told the German newspaper Die Tagespost Aug. 28 that Pope Benedict did not and would not comment on Vigano's document. The Register then replied that it never said Pope Benedict had read Vigano's report or that he had commented on it, only that Pope Benedict remembered wanting to impose sanctions of some sort.

Some things are clear: Vigano's document was prepared in consultation with at least one of the bloggers and journalists who were the first to publish it; the archbishop's document is filled with rhetoric indicating a broader agenda than just ending clerical sexual abuse; and the release of the document was coordinated and timed to have maximum impact.

What is not clear is if there were sanctions imposed on McCarrick and, if there were, did Francis know about them. And as of Aug. 29, neither Francis nor the Vatican press office has provided an answer.

Accountability | Is there truth in Archbishop Vigano's text and how are Catholics to know?

Pope says money at root of opposition to annulment reform

Scholars say correction of Francis for 'heresy' marked by hypocrisy, lack of signatories