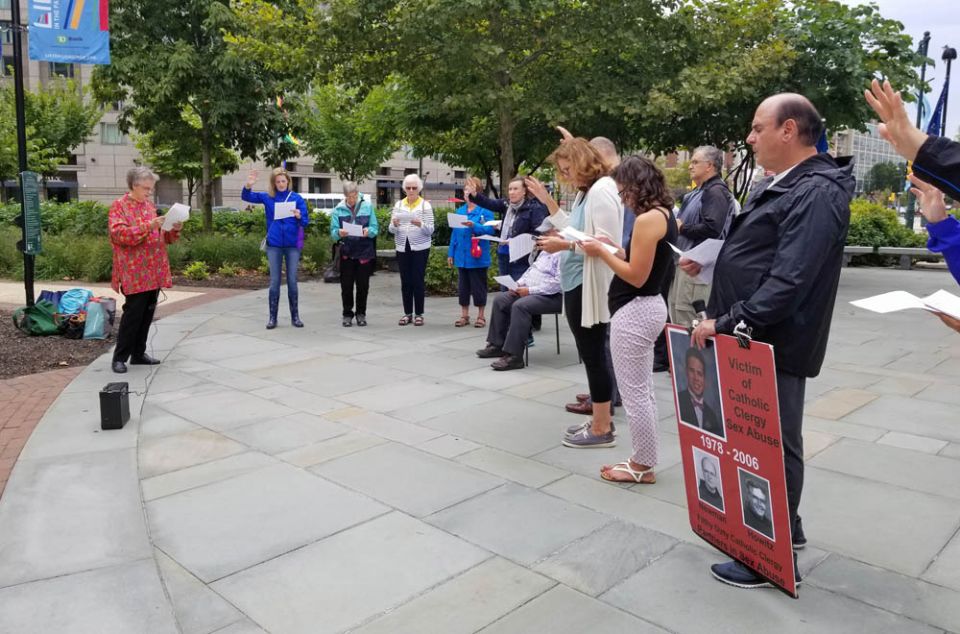 Vigil participants, led by Judy Heffernan, left, extend hands over each other and the Cathedral Basilica of Sts. Peter and Paul during a prayer for openness Sept. 8 in Philadelphia. (Christa Kerber)

Philadelphia — Standing across the street from the Cathedral Basilica of Sts. Peter and Paul, members of Catholic reform organizations held a vigil service Sept. 8 to demand justice for survivors of clergy sex abuse, accountability of priests and bishops, a bigger role for laypeople in the church, and an end to patriarchy.

The group then marched to nearby Academy of Natural Sciences of Drexel University to develop a blueprint for future action.

Sponsored by nine Catholic progressive groups, the "Time's Up: Catholics Demand Truth" gathering was part of a national series of such events held outside cathedrals across the country, including in Seattle, Denver and New York City.

In Philadelphia, the approximately 20 participants included representatives from the Philadelphia chapters of Call to Action and Catholic Organizations for Renewal, the Southeastern Pennsylvania Women's Ordination Conference, and the father of a sexual abuse victim, according to Regina Bannan, spokesperson for the women's ordination group.

The prayer service was led by Judy Heffernan, a member of Southeastern Pennsylvania Women's Ordination Conference and identified by that group as a "community-ordained woman priest." She invited others to join her in offering petitions, said Christa Kerber, a member of the local Call to Action chapter. 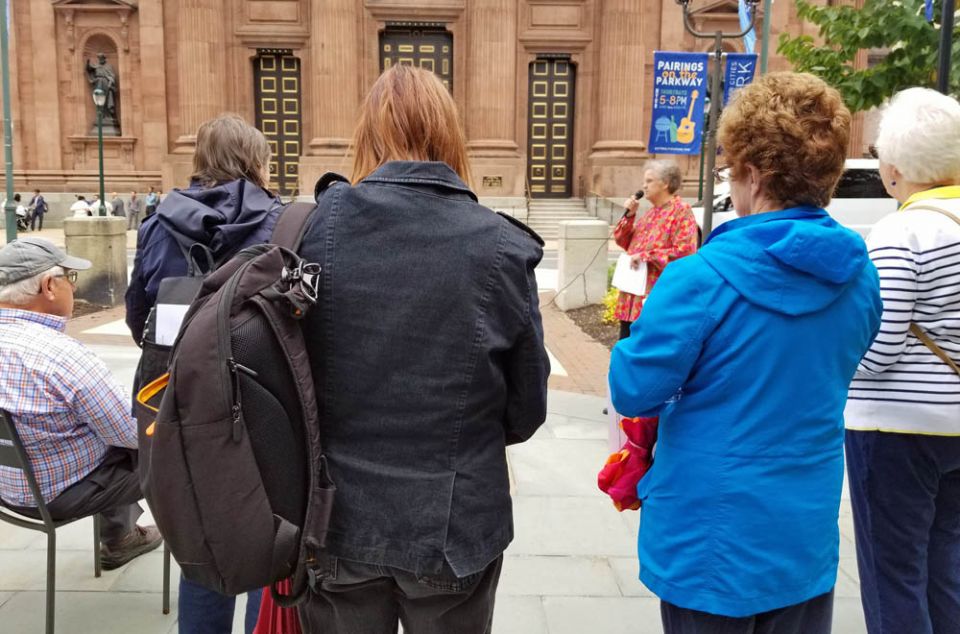 Judy Heffernan, right, speaks to participants outside the Cathedral Basilica of Sts. Peter and Paul Sept. 8 in Philadelphia. (Christa Kerber)

Kerber, a longtime activist, said that she's been surprised by the level of outrage she's encountered in the wake of the latest grand jury report, which covered six of the eight dioceses in Pennsylvania. (Two dioceses, Philadelphia and Altoona-Johnstown, had been the focus of prior investigations.)

"As you know, we've been through this before. Maybe it took this one to wake them up," she said.

While most of the vigils that took place weren't paired with organizing sessions, Philadelphia's emerged from a lunch-counter conversation a few weeks prior to the event, said Zach Johnson, executive director of the national Call to Action organization.

Follow-up conversations in small groups, facilitated by Johnson, met in a room at the Academy of Natural Sciences. According to participants, the groups focused on three areas: engaging bishops and clergy in dialogue, developing relationships with current and former Catholics, and organizing future education events, vigils and campaigns.

While there was no set action plan, part of the goal was to emerge with some definite demands, according to Alyssa Duffner, a recent Jesuit Volunteer Corps graduate who had organized an Aug. 26 vigil of young Catholics outside the basilica. "If this is going to work, people need to have a consensus across the board, knowing what the demands are and collaborating."

Johnson says he expects that many of the future actions, including those scheduled for Oct. 6-7, will include time for an organizing session.

"These things will continue across the country, it's pretty well certain," he said. "There's no reason to think this will slow down."

"The tragedy is that people leave the church and say it's corrupt, rather than it's made mistakes and we want it to be different, "said Bannan, who participated in this weekend's protest. "It can be better, and we want to help."