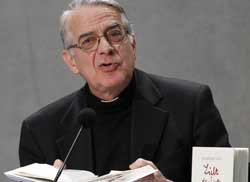 ATTENTION: There was a mistake in the email alert this morning. You may be looking for this story: Bishops' conscience model makes light of practical reason. Sorry for the inconvenience.

VATICAN CITY -- The Vatican published online more than 70 pages of documents which, it said, prove the Vatican had no knowledge of a priest's sexual misconduct until he and his religious order petitioned for his laicization.

The case involves the late Andrew Ronan, a former Servite priest who was laicized in 1966; a man who says he was abused by Ronan in Oregon in 1965 has taken the Vatican to court, claiming Ronan was a Vatican employee.

In a statement Aug. 17, Jesuit Father Federico Lombardi, Vatican spokesman, said, "While most of the case has been dismissed, two accusations made by (the) plaintiff's attorneys have persisted and have been repeatedly reported in the press: that the Holy See knew that Ronan was an abuser, and that the Holy See transferred Ronan from one place to another with that knowledge.

"Those would, of course, be very serious accusations -- if true," Father Lombardi said. "But, as we are learning with the development of the case, the accusations are decidedly not true."

The Vatican spokesman said that "to assist those in the public who wish to study the matter carefully, and to assist the United States court in resolving the remaining issues in the case, the Holy See is releasing today documents relating to Ronan, principally with respect to Ronan's dismissal from the clerical state."

The documents include a formal request made by the Servite order in 1953 asking the Vatican to set aside the age requirement so that Ronan, then only 27 years old, could be appointed master of novices at the Servite convent in Benburb, Ireland.

The letter described Ronan as "a youth with optimal qualities," and the then-Vatican Congregation for Religious granted the permission.

But the documents -- posted at http://www.radiovaticana.va/pdf/documents_Doe_v_Holy_See.pdf -- also say Ronan was removed from the position "because of homosexuality with the students," according to a letter from the U.S. provincial who transferred Ronan to St. Philip's High School in Chicago.

The provincial was writing to the order's superior general in 1963 after the superior asked Ronan if he wanted to serve as master of the order's international seminary in Rome.

Written on the letterhead of the provincial superior of the Chicago-based Our Lady of Sorrows Province, the letter said, "I am very sorry to have to tell you that he must not be elected master."

The provincial, whose signature is illegible, said Ronan asked him not to tell, but "I feel and know I must do so."

He said, "I removed him from Benburb because of homosexuality with the students, which he freely admitted and confessed when the fact had been brought to the prior by one of the students."

"We lost vocations as a result of this in Ireland, and we are most fortunate that more scandal did not come," the provincial said, adding that putting Ronan back in a seminary would be "contrary to all prescripts of the church and to common sense."

"While there has been no recurrence of this problem, all the experts in this perversion agree that there is no permanent cure. I am expecting the worst any day here at St. Philip's, but much better that it occur here than in a seminary," the provincial wrote in 1963.

The 1963 letter was part of the documentation the Servites submitted to the Vatican in 1966 to support the request to laicize Ronan quickly.

"Clearly the Vatican did not have this letter at the time" of the initial reports about Ronan's abusive activity, Father Lombardi told Catholic News Service.

A handwritten, undated and unsigned letter said then-Archbishop Edward D. Howard of Portland had set up a tribunal regarding Ronan's actions in Portland, where he was transferred to a parish after his assignment in Chicago.

The letter said the investigation was "necessarily stirring up the muddy waters" and that "Andy (Ronan) would much prefer a voluntarily requested dispensation (from the priesthood) than be thrown out. Wouldn't it be best for all?"

The documents include a February 1966 letter, in Latin, from Archbishop Howard to the Servite superior in Rome informing him that the archbishop had encouraged the provincial superior to petition the Holy See to laicize Ronan.

The published documents also include Ronan's request for laicization "based on my repeated, admitted, documented homosexual tendencies and acts against the vow of chasity (sic) and celebacy (sic) of the priesthood."

Jeffrey Lena, the U.S.-based attorney for the Holy See in the case John V. Doe v. Holy See, said the documentation proved "the Holy See was not involved in Ronan's transfers, including his transfer to Portland, and had no prior knowledge that Ronan posed a danger to minors."

In June 2010, the U.S. Supreme Court left standing a lower court ruling that Doe could try to hold the Vatican financially responsible for his sexual abuse by Ronan, if he could persuade the court that the priest was an employee of the Holy See.

Lena said Doe's lawyers "never had support for the calumnious accusations" that the Holy See knew Ronan was an abuser and was involved in transferring him when his abuse was discovered.

While Lena said the lawyers' conduct was regrettable, "it is important to remember that any abuse suffered by this plaintiff, or any other victim of sexual abuse, is deplorable."

Australian cardinal says he was deceived over reassignment of priest abusers