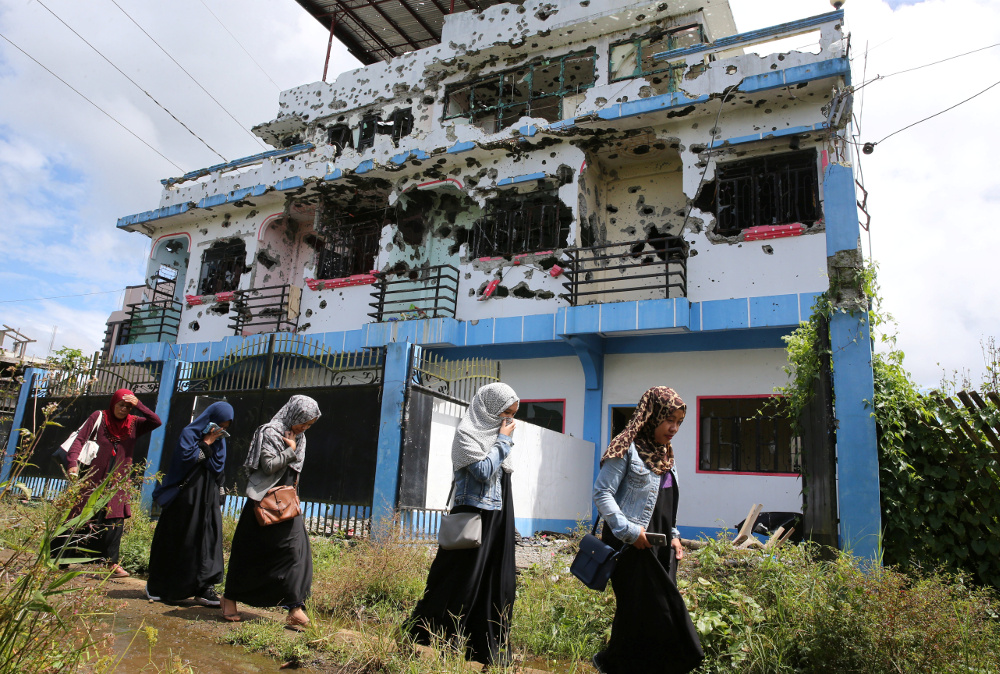 Residents who returned from evacuation centers walk past a bullet-ridden house Oct. 29 believed to have been used by pro-Islamic State militant group leaders in Marawi, Philippines. (CNS/Romeo Ranoco, Reuters)

The threat of violent extremism remains in the predominantly Catholic Philippines even after the end of a five-month siege by terrorists in a southern city, said Catholic and Muslim officials.

Fr. Jerome Secillano, executive secretary of the Philippines bishops' Public Affairs Committee, told Catholic News Service that, according to some analysts and the president, "terrorist cells are already everywhere. It's not only concentrated in Marawi, but there is a presence also in other parts of Mindanao."

The historically peaceful Marawi on Mindanao Island in the South was the site of a sustained siege by Islamic State loyalists, who wanted to claim it as an IS caliphate. More than 1,100 people — mostly IS fighters — died in the battle where the fighters, fortified with munitions and provisions, withstood a military offensive backed by intelligence and special training from the United States, Australia and other countries.

The military killed two local leaders who headed the fight, prompting the president to declare the siege over.

Days later, Mindanao's Cardinal Orlando Quevedo of Cotabato told reporters "the threat of terrorism is still there" and that extremist ideology and plans for a caliphate continue.

Manila-based terrorism analyst Rommel Banlaoi told CNS the fall of the IS-held capital of Raqqa, Syria, Oct. 17 meant the terror group would end moves to set up a worldwide caliphate in Iraq and Syria and decentralize.

Banlaoi, executive director of the Philippine Institute for Peace Violence and Terrorism Research, said the caliphate would instead be in the "hearts and minds" of its fighters. He predicted IS would become more of a "franchise operation," using the internet to urge followers to carry out terrorism acts against "the infidels and crusaders" in their home countries.

"ISIS is planning to set up a strong foothold in Asia," he said. "And in Asia, the epicenter of their plan is the southern Philippines."

Banlaoi named at least four different Mindanao-based groups that he said are planning attacks, including on churches and in Cotabato, "the most Catholic city in central Mindanao."

Secillano said, for the short term, security forces should be visible, especially in churches, hotels and other public places.

"The presence of law enforcers is very important to derail whatever plans terrorists have," he said. "That's the immediate response we can do. But the more holistic approach, in order to wipe out terrorism, I think it's a combination of many strategies."

Philippine President Rodrigo Duterte declared martial law in Mindanao at the start of the siege May 23.

Secillano said access to education in the southern region with some of the poorest provinces in the Philippines would reduce chances of young people being "whitewashed" by extremists trying to recruit them. He also said better infrastructure was needed to keep Mindanao from being isolated.

The Moro Islamic Liberation Front — the country's largest Muslim rebel group, which forged peace with the government in 2014 — has expressed serious concern over its younger members joining extremist groups.

The peace pact to end nearly four decades of fighting for autonomy, which left more than 120,000 people dead, was derailed in 2016 after the Philippine Congress failed to pass a bill that would create a self-sustaining autonomous region.

The front's Mohagher Iqbal, who chairs the peace accord's transition commission, told CNS failure to create the autonomous region has caused dissatisfaction among the younger rebels.

Iqbal said many of the people who joined the Maute fighters for the Marawi siege said they were frustrated "with the slow peace process in the Philippines" and, with the crisis over, "that is a great concern for us, because certainly they will try new tactics on how to recruit people."

Banlaoi said child soldiers among six platoons of young fighters in Marawi told him they were being offered $970 to join, given $2,900 to be called to duty and allotted another $3,900 once they entered the battle. The minimum wage in that part of the country is about $130 per month. Banlaoi said the money came from IS, the local illegal arms and drug trade and other sources.

Iqbal said days after Oct. 23, the official end of fighting, he called a meeting of mostly Protestant church leaders, whose organizations had been active in emergency response and relief efforts for the hundreds of thousands displaced by the siege, "for the close coordination and cooperation among religious groups to spread peace and justice and, of course, how to confront violent extremism in Mindanao." 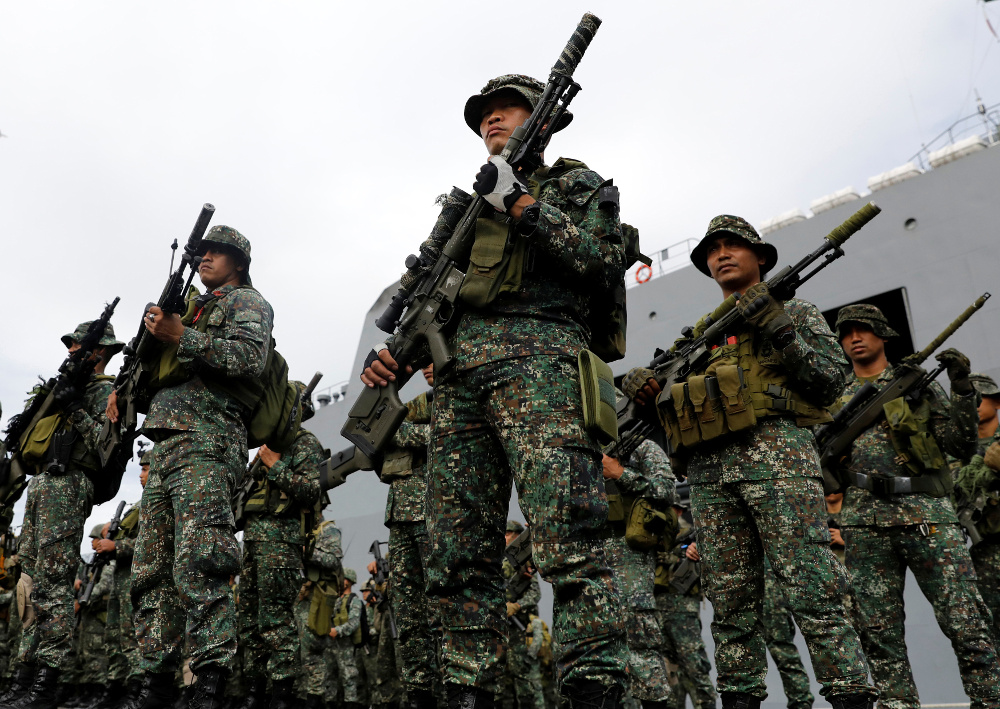 He said Catholic support for the peace process has been strong, particularly from the Cotabato Archdiocese, where the front's main stronghold is.

Baptist Bishop Noel Pantoja, head of the Philippine Council of Evangelical Churches, attended the meeting. He told CNS the Marawi siege was a "wake-up call."

"It was not just a sporadic attack in the city. It was years of preparation," Pantoja told CNS. "So when it happened, the Marawi siege, the military, the government was surprised. They thought it would only last three days. But there's a massive number of people, massive amounts of money being poured in."

He said this is the challenge faced by the government, the Moro Islamic Liberation Front and the rest of the country.

Coverage of international religious freedom issues by Catholic News Service is supported in part by Aid to the Church in Need -- USA (www.acnusa.org).