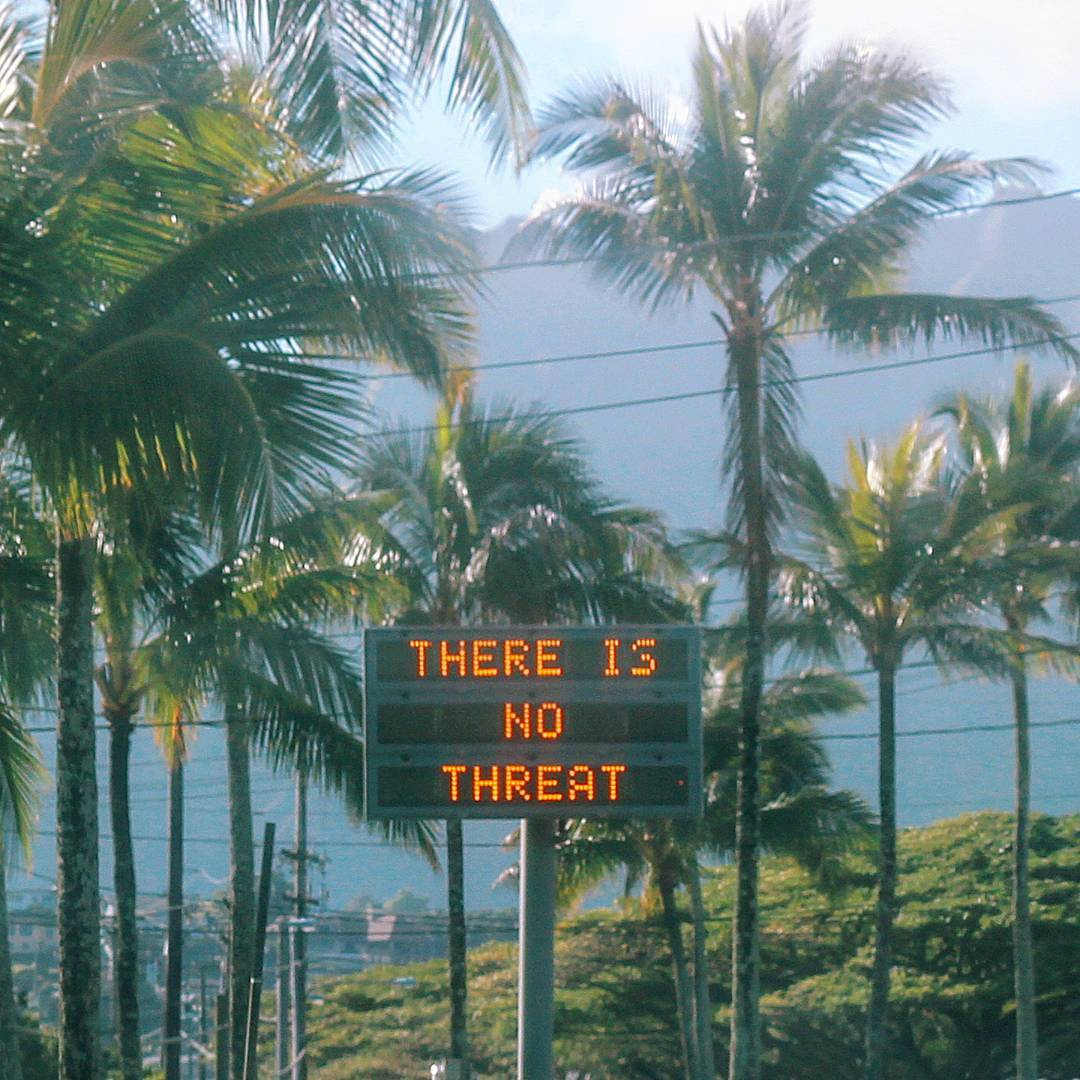 An electronic sign reads, "There is no threat" in Oahu, Hawaii, after a false emergency alert that said a ballistic missile was headed for Hawaii Jan. 13. Honolulu Bishop Larry Silva gave general absolution to about 45 people in a deacon formation program in response to the alert of an imminent ballistic missile attack that put Hawaii in a state of panic early Jan. 13. (CNS/Instagram/@sighpoutshrug via Reuters)

Honolulu Bishop Larry Silva gave general absolution to about 45 people in a deacon formation program in response to the alert of an imminent ballistic missile attack that put Hawaii in a state of panic shortly after 8 a.m. Jan. 13.

It was the first time he had ever performed the rite. The absolution of sins given to a group of people at one time is allowed only in grave circumstances, such as situations of great danger or imminent death, or for soldiers going into battle, when private confessions are logistically impossible.

"I am not in favor of general absolution in general, but that was an appropriate use," he said in a Jan. 16 interview with the Hawaii Catholic Herald, Honolulu's diocesan newspaper.

"If there ever was an occasion that was it," he said. "It was scary."

Silva was in his residence at St. Stephen Diocesan Center in Kaneohe at 8:07 a.m. when the Hawaii Emergency Management Center sent this message to cellphones across the state: "BALLISTIC MISSILE THREAT INBOUND TO HAWAII. SEEK IMMEDIATE SHELTER. THIS IS NOT A DRILL."

Time was of the essence. A ballistic missile from North Korea would take 15 to 20 minutes to hit Hawaii.

The first thing the bishop did was attempt to alert a visiting monsignor, but the priest did not answer his knock.

So, he walked the 50 or so yards to the center's chapel where nine deacon candidates and their wives, there for the weekend with their formation team, were attending Mass.

"I thought, 'How can I make myself useful?'" the bishop said.

By then the celebrant, diocesan judicial vicar Father Mark Gantley, was halfway through the distribution of Communion.

The group already knew something was up because Deacon John Coughlin, director of the diaconate formation program, had showed a cellphone displaying the threat message to Gantley while he was giving Communion.

Some thought that perhaps the bishop had died and were relieved when he walked in the back door.

Gantley continued the Mass to the end without a mention of the alert.

"The first thought that came to me was that I am going to finish Mass," he said. "I am not going to interrupt it."

He did skip the leave-taking song, however.

That's when Silva, who was wearing a T-shirt, stepped forward to say he would give everyone general absolution.

He decided to forgo the stole and skip the liturgy that accompanies the rite.

"I just thought, 'Let's get this thing done,'" Silva said.

After giving a brief introduction about what he was doing, he said the words of absolution over the group.

"Some people were visibly upset," Gantley said. "I remember one woman crying."

Coughlin said the absolution was followed by a feeling of peace.

"It was incredible calming for everyone," he said.

Eva Andrade, one of the deacon formation staff, called the absolution "the most powerful reconciliation ever," adding that she has received quite a few.

"It was deeper, richer," she said. "In that moment when you really don't know (if you are going to die), your heart reaches out for that forgiveness."

"In that moment everything changed and was made right," she said. "You could feel the presence of God in that room."

Following the sacrament, Silva told the group that they might as well have breakfast which was being served in the dining room in the safest building on campus, a former mansion with 3-foot-thick concrete walls.

Thirty-eight minutes after the initial warning, the emergency management center sent an all-clear -- the warning had been a "false alarm."

That evening the deacon formation class had an unscheduled two-hour "critical incident stress debriefing" led by Father John Keenan, who is a Blessed Sacrament priest and a psychologist who specializes in such events.

"It became a very emotional," said Coughlin. One of the couples' biggest concerns was that they "were away from their children" during the incident.

"There was a cathartic release," he said.

Coughlin also observed that, through the trauma, the deacon candidates "learned a little bit about ministering to others."

"I thank the Lord for that," he said.