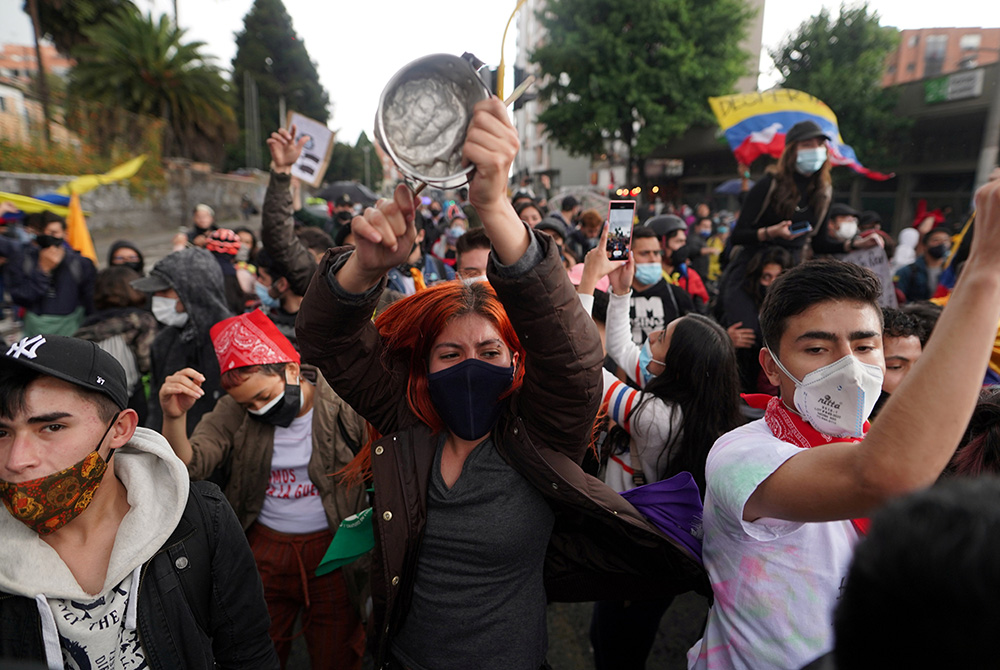 Demonstrators participate in a protest against poverty and police violence May 4 in Bogota, Colombia. (CNS/Nathalia Angarita, Reuters)

As protest after protest has crowded the streets of Colombia's major cities in recent weeks, Catholic Church leaders in the country have been showing support for some of the protesters' demands, while also trying to help them dialogue with the government.

The wave of demonstrations began on April 28, after President Iván Duque proposed an unpopular tax reform measure that has been criticized by labor unions, social movements and students. Analysts said the bill would raise taxes for segments of the working class, while large corporations and the upper classes would be less affected.

"The bishops' conference had released a statement about the reform before the marches began, saying that it wasn’t appropriate," Msgr. Hector Henao, director of the Colombian branch of the Catholic charity group Caritas, told NCR.

In their April 29 letter, the bishops said a "broad dialogue about all items of the reform" was necessary.

"It is imperative, at this very complex moment in all levels of the country's life, to raise awareness on the seriousness of the problems that we are facing and, above all, on the implications of the proposed reforms for the poorest and most vulnerable segments, amidst a deep healthcare, economic and social crisis," said the bishops.

A few days after the first protest, Duque canceled the tax reform project and his finance minister resigned. But huge masses have continued to occupy streets in several cities, day after day.

Dissatisfaction with Duque grew during the pandemic. Many in Colombia say his administration failed to adequately manage the coronavirus crisis. With a population of 50 million people, the country has had 3.2 million confirmed cases of COVID-19, with more than 85,000 deaths. As of May 23, only 5.1 million people had received at least one dose of the vaccine. 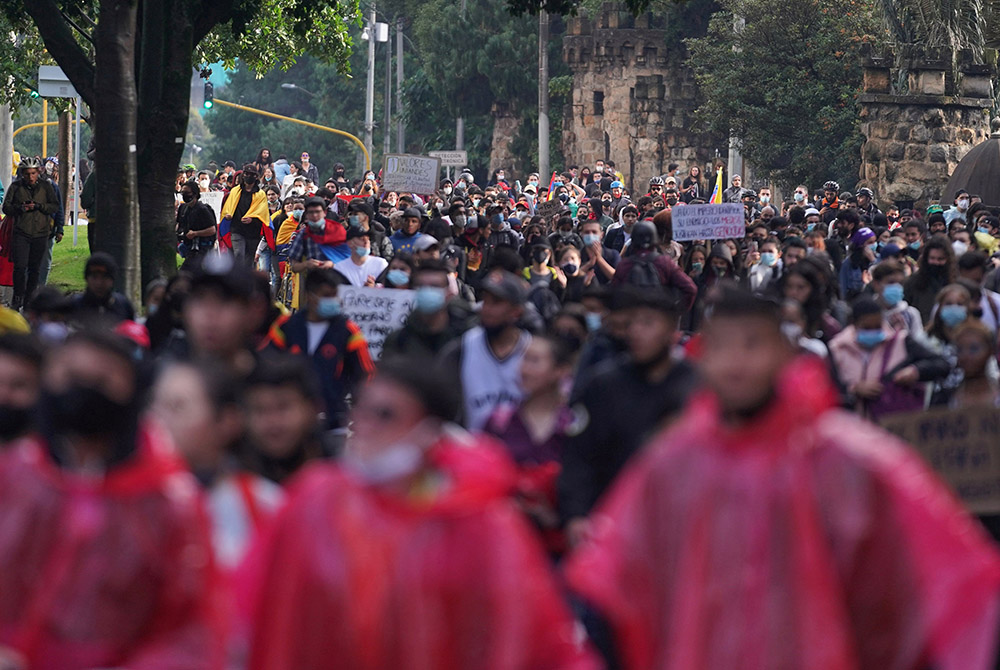 Demonstrators participate in a protest against poverty and police violence May 4 in Bogota, Colombia. (CNS/Nathalia Angarita, Reuters)

A proposed reform of the health care system added to tensions among several social groups, said Daniel Caicedo, a member of the Young Christian Workers movement in Cali, a city near Colombia's western coast.

"Our movement has been following the situation from the start," Caicedo told NCR. "Such reforms won't help us. The government wants to reduce the size of government."

The health care reform was voted down in Congress on May 19, in what was seen as a victory of the demonstrators.

The negative reaction to the government's plans is connected to long-held discontent with Duque’s administration, which critics say hasn’t reduced poverty and social inequality in the South American country.

"The current complaints about the government are not new," said Henao, the Caritas director. "Colombia had seen great protests in 2019. The National Strike Committee [formed by labor unions and social movements] presented a declaration of demands back then which has never been addressed."

More than 21 million Colombians live in poverty, a third of them in extreme poverty, according to national statistics. In 2020, 2.7 million people joined the latter group. 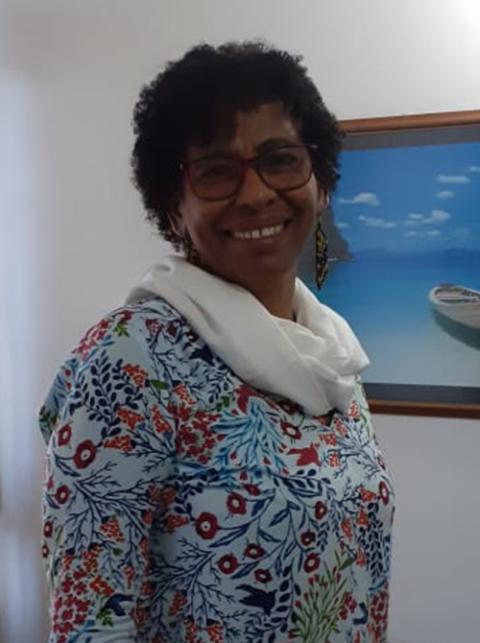 Young people have been particularly impacted by the economic hardships, said Sr. Zoila Cueto, a member of the Apostolate of the Sacred Heart of Jesus.

"Young peoples' lives have been under attack for long," Cueto told NCR. "The youth in the barriadas [slums] can’t find a job and can’t study."

That’s why so many young demonstrators joined the marches, she said, adding: "People are sick and tired of that situation. Some said: 'I’m not afraid of the pandemic. I prefer to die while I’m protesting about my situation than to die at home.' "

The government reacted to the protests violently. Civic organizations Temblores and Indepaz reported that 43 people were killed by security forces during the demonstrations that took place all over the country since the end of April.

The number of cases of other kinds of police violence reached 2,387, they reported. Thirty-three people had eye wounds. Eighteen demonstrators suffered sexual violence.

"Repression has been terrible," said Cueto. "The government has even employed tanks against the youth."

As the protests continue, various Catholic groups have been pushing for dialogue among people from all political backgrounds, and between the demonstrators and the government.

Along with the United Nations, the Colombian Bishops’ Conference was invited to mediate the talks between the National Strike Committee and Duque's administration. Henao was appointed as the church’s delegate and has been trying to facilitate the negotiation.

"The National Strike Committee has demanded from the government guarantees concerning the right of the people to protest and the very existence of a negotiation table," said Henao. "Up to now, no progress has been reached." 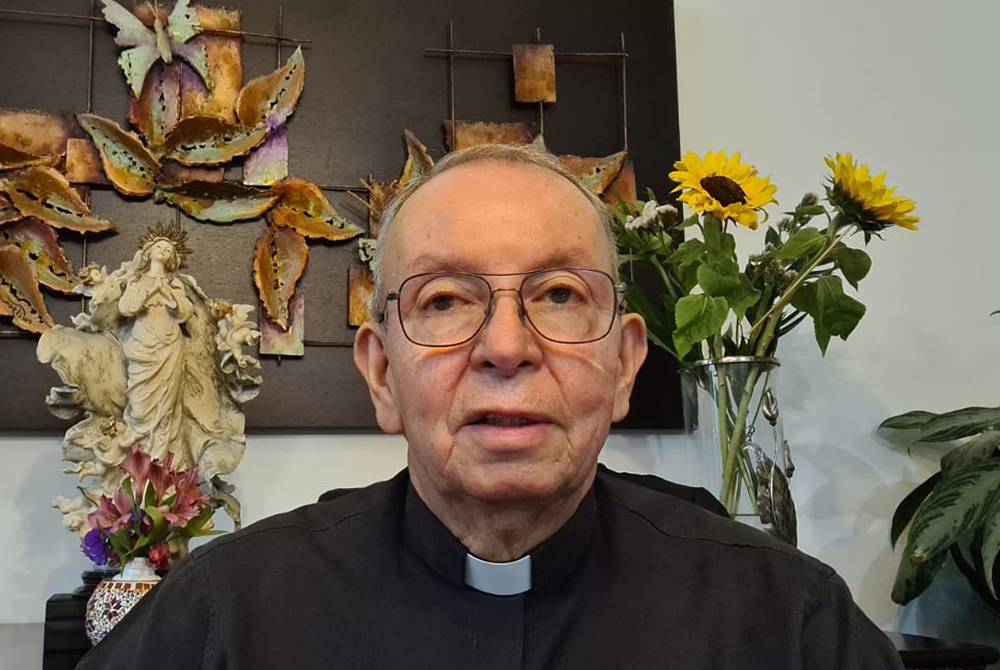 Protest organizers have announced plans for new marches on May 26 and 28.

The bishops' conference has issued several statements calling for peace and mutual understanding. Individual bishops have also issued their own statements, asking people to eschew any violence.

On May 20, the head of Colombia's diocese for military servicemembers, Bishop Victor Manuel Ochoa, invited the members of the security forces and all people in general to take part in a 30-hour prayer journey for peace in Colombia.

Lay Catholics have also launched initiatives to intervene in the social unrest. A group of 36 theologians and teachers of religious education released a statement at the end of April, appealing to Colombians to build "a common project which knows how to use diversity and difference as an authentic richness to the benefit of human dignity."

The document rejected the scenes of violence during the protests, "which have cost the lives of civilians and policemen" and stressed the need for a "respectful and plural" dialogue.

Juliana Triana, a researcher at University Minuto de Dios' Fuego Nuevo Center and a signatory of the document, said its writers wanted to speak out.

"Usually people wait for the hierarchy," said Triana, who helps educate pastoral leaders. "But we wanted to show with our letter that we’re also the church and we can give our opinion." 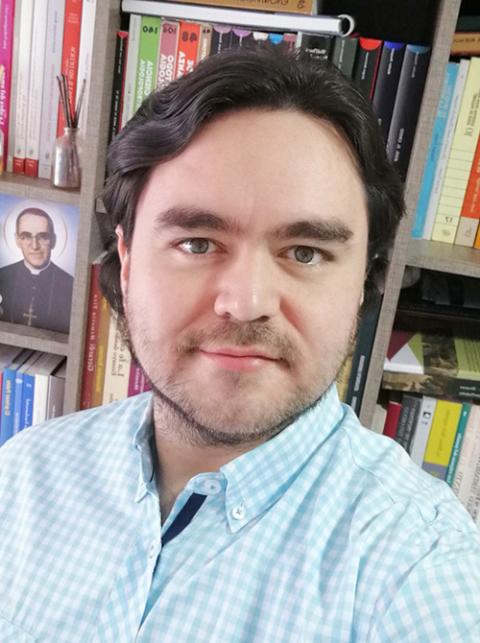 Triana said there is a lot of political polarization in the country at this moment, mostly between Duque’s supporters — who identify not only with him, but especially with his ally, former President Álvaro Uribe — and the supporters of Sen. Gustavo Petro, who has endorsed the marches.

"We'd like to reduce polarization and move away from the idea that we’re enemies of each other," she said. "What we really need is to generate human dignity and to serve the poor."

Theologian Heyner Hernández was one of the letter's editors. He said he thinks the statements from the bishops' conference have shown an "excessive delicateness," although they have addressed issues with Duque's reforms.

"Someone had to denounce the excesses of the repressive police actions, someone had to criticize social injustice," said Hernández. "We needed more evangelical vehemence in the denunciation of corruption."

Hernández also criticized Colombian media outlets for the way they have covered the protests, often skewing coverage against the protestors.

"The media is generating much confusion," he said. "A few acts of vandalism during protests have appeared with great visibility, but serious cases of police brutality have not."

A version of this story appeared in the June 11-24, 2021 print issue under the headline: Protests crowd the streets of Colombia.