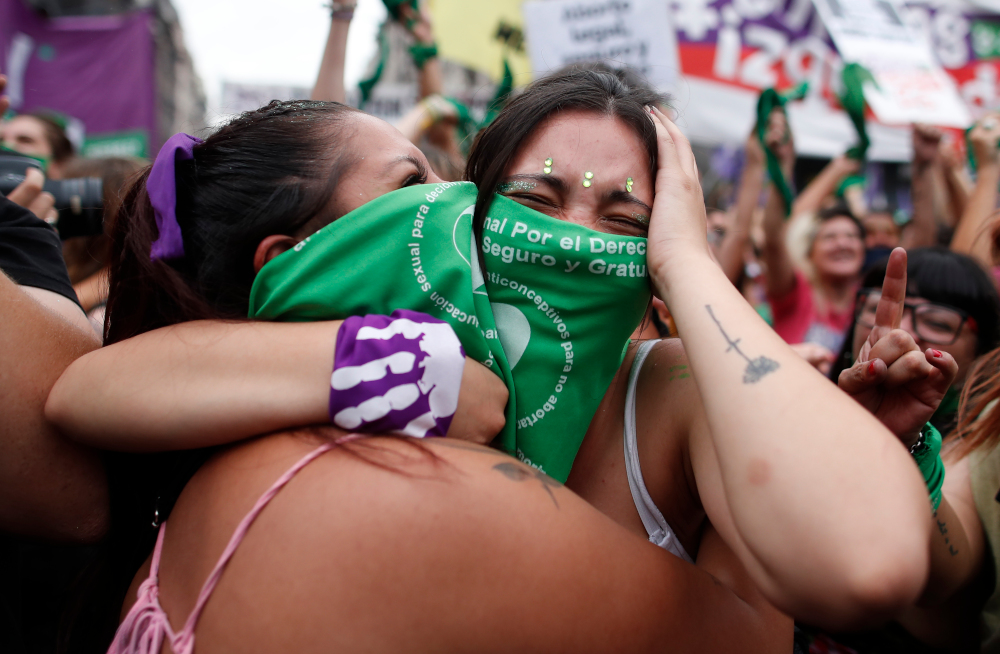 Abortion rights activists celebrate outside the congress building in Buenos Aires Friday, Dec. 11, 2020 as the Argentine lower house approves a bill that would legalize abortion. The bill now moves to the Senate. (AP Photo/Natacha Pisarenko)

Lawmakers in Argentina’s lower house on Friday passed a bill that would legalize elective abortions to the 14th week of pregnancy, a proposal from President Alberto Fernández in response to long-sought demands from women's rights activists in the homeland of Pope Francis.

The bill still needs approval from the country’s Senate in a debate expected before the end of the year.

The proposed law was approved in a 131-117 vote with six abstentions after a marathon debate that extended from Thursday into the early hours of Friday morning. Some of its backers were lawmakers in the opposition.

Demonstrators in favor of decriminalizing abortion, who had spent the night outside the congress building in Buenos Aires, erupted with joy and embraced each other as they listened to the parliamentary speaker reading the vote's results on screens. Many of them wore face masks in the green color that has become a symbol for their movement.

Hundreds of meters (yards) away, not far from the parliament building, hundreds of opponents dressed in light blue and carrying the national flag deplored the result, with some shedding tears.

Latin America has some of the world’s most restrictive abortion laws. Mexico City, Cuba and Uruguay are among the few places in the region where women can undergo abortions during the first 12 weeks of pregnancy regardless of the circumstances.

Currently, many women who have an abortion in Argentina, as well as people who assist them with the procedure, can face prosecution. Exemptions are only considered in cases of rape or if pregnancy poses a risk to the mother’s health.

Before getting elected one year ago, Fernández had promised to push for making abortion voluntary and cost-free.

While the bill passed the lower house, the outlook is less clear in the country's Senate. Two years ago, during the administration of more conservative President Mauricio Macri, the upper house voted against a similar bill to legalize abortion after it was narrowly approved by the lower house

Ahead of Thursday's debate, the Roman Catholic Church had appealed to legislators for “a second of reflection on what respect for life means,” echoing the position of Pope Francis, an Argentine, that abortion is part of today’s “throwaway culture” that doesn’t respect the dignity of the unborn, the weak or elderly.

Several thousand women seeking abortions have died during unsafe, clandestine procedures in Argentina since 1983, and about 38,000 women are hospitalized every year because of botched procedures conducted in secret, according to the government.

The bill approved Friday follows more than a decade of campaigning by the National Campaign for the Right to Free and Safe Legal Abortion.

Speaking minutes before the congressonal debate ended, Silvia Lospennato, one of the opposition lawmakers who backed the ruling party's initiative, said it was time “to finish writing the rights and move on to the stage of equality.”

"To each woman who wears the green scarf demanding to decide, to those who never lower their arms: May abortion be legal and free! Let it be law!” Lospennato said.

But lawmakers from several parties have argued that abortions would be a violation of the American Convention on Human Rights, which they say takes precedence over the the national Constitution and that establishes that the right to life should be protected by law, “in general, from the moment of conception.”

“Instead of solving the causes — the lack of education, poverty, flaws — we are proposing for the solution to the problem to remain in the private sphere of women and, worse even, without any chance for men's opinion," she said.

If passed in the Senate, a traditionally more conservative chamber, abortions would be possible beyond the 14th week if the pregnancy is the result of rape or if it endangers the person carrying the fetus.

Those below the age of 16 would exercise “their rights through their legal representatives” and can seek “legal assistance” in cases of “conflict of interest."

In hopes of winning more votes, legislators who support the bill made last-minute changes to the text that would allow private clinics in which all medical workers oppose abortion rights to refrain from providing the procedure. Such clinics, though, would be required to refer women to another facility that does abortion procedures.