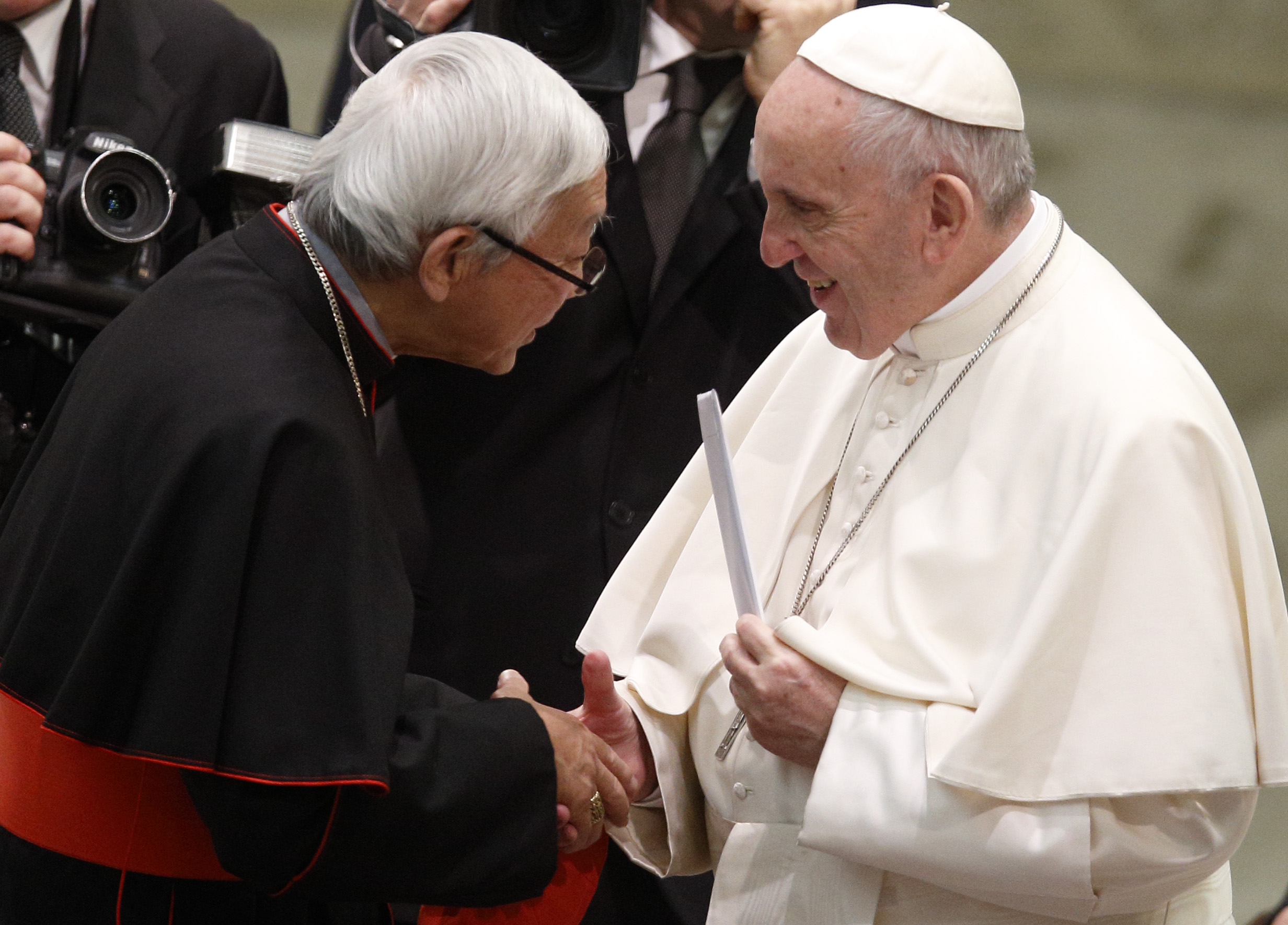 Pope Francis holds a letter presented by Cardinal Joseph Zen Ze-kiun, retired bishop of Hong Kong, during his general audience at the Vatican Jan. 10. Cardinal Zen says until the Vatican signs an agreement with China on the appointment of bishops, he will continue to speak against it. (CNS/Paul Haring)

As rumors fly of an imminent Vatican-China deal on the appointment of bishops, a Belgian priest known as an expert on China said he thinks an agreement might really happen.

"I've never seen a more serious attempt to enter into a dialogue and to continue the dialogue," said Missionhurst Father Jeroom Heyndrickx, a member of the Vatican Commission on China, which has not met under Pope Francis.

The Vatican and China, which severed diplomatic ties in 1951, have had on-again, off-again talks since the 1980s. Heyndrickx noted that the Vatican was not considering diplomatic ties, but only the appointment of bishops.

He said Francis restarted negotiations with China in 2014, and "it has been clear from the beginning ... it was a serious attempt on both sides."

What is "remarkable," he told Catholic News Service, is that both sides have continued to talk for four years. "They haven't given up."

One of the reasons Heyndrickx believes China is negotiating in good faith is the Chinese know Cardinal Pietro Parolin, Vatican secretary of state.

"Chinese authorities, to my knowledge, have full trust in Parolin, who came already to China in 2009" and negotiated the first draft of an agreement when Tarcisio Bertone was Vatican secretary of state.

The Vatican did not sign that draft and, in 2009, China again began ordaining bishops illegally, without Vatican approval.

Heyndrickx also said another key player was retired Archbishop Claudio Maria Celli, 76, who served in the Secretariat of State under Cardinal Agostino Casaroli beginning in the 1980s. From 1990 to 1995, Archbishop Celli was undersecretary of state for relations with states.

"He knows" about the China situation, said Heyndrickx. "And the Vatican and China know that he knows."

The Asian church news agency ucanews.com reported March 21 that Hong Kong-based Cardinal Joseph Zen Ze-kuin, one of the biggest critics of a Vatican deal, believes the landmark agreement could be signed as early as March 23.

Zen, retired bishop of Hong Kong, says the Vatican should not give China too much power in the selection of bishops. Months after Francis' 2013 election, Zen called on the Vatican to speak more clearly in defense of Chinese Catholics, especially the so-called "underground" or clandestine communities who refuse to register with the government-controlled Catholic Patriotic Association.

He also said he could see the "shadow" of Casaroli's policy of "Ostpolitik," as the Vatican's overture to Soviet countries was known.

In 1963, at the height of the Cold War, St. John XXIII selected then-Msgr. Casaroli to begin the delicate work of re-establishing diplomatic contact with the Marxist states.

Working quietly and cautiously, the monsignor tried to gain even the smallest of concessions for the church and its believers, who for almost 20 years had been locked out of church buildings, imprisoned or exiled for practicing their religion and denied good jobs because they were Catholic.

In the early days of Ostpolitik, the Vatican offered such things as a government voice in the appointment of bishops in a swap for guarantees that institutional church life could continue. Casaroli had often remarked that it is better for the church to exist under government constraints than not to exist at all.

At the time, critics said the Vatican policy amounted to little more than selling out to communism for a few favors.

China's estimated 10 million-12 million Catholics are divided between two communities: one that, for decades, remained underground because it did not accept compromises and political control after the Chinese communist takeover in the 1950s, and another that accepted some compromises and political control in order to continue its existence. Both communities are faithful to the pope, and both have faced persecution from Chinese authorities.

In February 2017, announcing that the Vatican and China had reached consensus on the appointment of bishops, Hong Kong Cardinal John Tong said: "From now on, there will be no more the crisis of a division between the open and underground communities in the Church in China.

"On the contrary, these two communities will gradually move toward reconciliation and communion on the aspects of law, pastoral care and relationships. The church in China will work together to preach the Gospel of Jesus on the soil of China," he said.

In the past, most bishops ordained illegally have applied in writing to the Vatican, sought forgiveness, and received Vatican approval. All this was done in secret, yet Chinese officials acknowledged they knew what was going on.

In recent years, because of government requirements, the priests, nuns and laypeople of Chinese dioceses have elected their new bishops. Most of those elected have applied to the Holy See for approval.

Tong said the Sino-Vatican dialogue indicates that China now will "let the pope play a role in the nomination and ordination of Chinese bishops." Since, under church law, the pope has the final say in the appointment of bishops, this would solve several problems, he said.

"Beijing will also recognize the pope's right of veto and that the pope is the highest and final authority in deciding on candidates for bishops in China," he said. The Catholic Patriotic Association advocates the "self-nomination and self-ordination" of bishops, but if the agreement on papal approval of bishops is reached, that principle will become history, he said.

Zen said on a recent blog post: "Until I see an evil deal signed, I refuse to believe that it can be real." If it is signed, he said, he will not go against the pope. "I will accept defeat, retire in silence."

Heyndrickx told CNS he understands why Chinese Catholics who have resisted all these years would find a Vatican agreement with communist authorities unfair. But, he said, "without give and take, nothing will happen. And if nothing happens, this will be worse."

Chinese Catholics feel like, "we lose," he said, but "both sides will lose."

"Who loses more? Who loses less? It's hard to say," he said, adding that he is sure Chinese authorities are facing the same type of criticism as Vatican officials.

In the end people must look for the practical compromise, he said, and whoever gives in, "they are blamed in history."