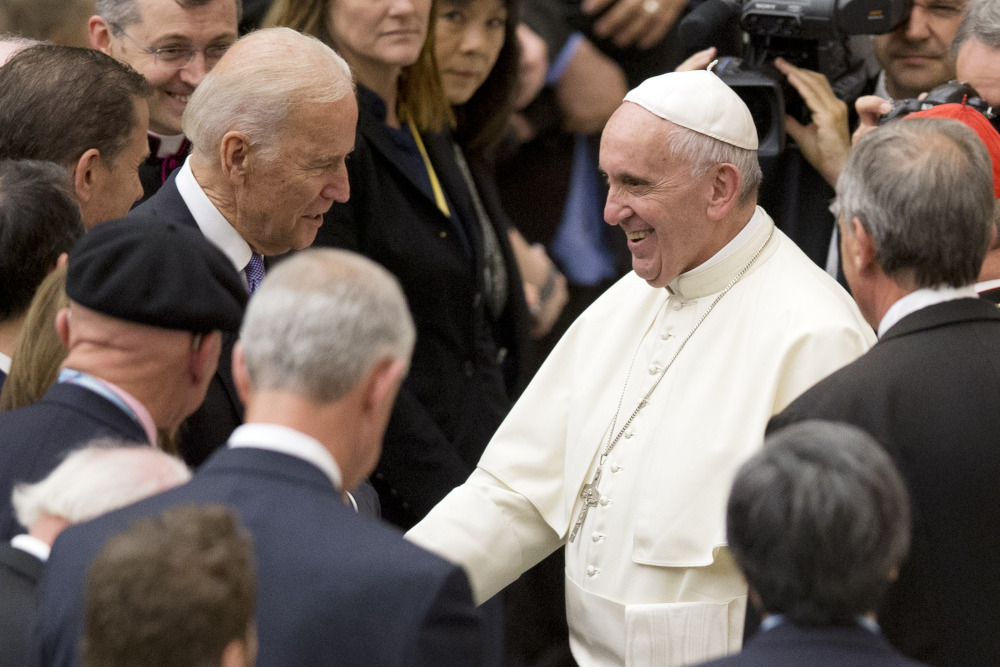 FILE - In this April 29, 2016, file photo, Vice President Joe Biden shakes hands with Pope Francis during a congress on the progress of regenerative medicine held at the Vatican. Biden has demonstrated a deep public connection to his Catholic faith, dating to the earliest days of his political career. (AP Photo/Andrew Medichini, File)

It was one of the first stress tests of Joe Biden's presidential campaign: A sudden reversal of his decades-long support for restricting federal funding of abortions.

The move seemed sure to hurt the former vice president with Catholics, particularly those in the Midwest, whose support will be critical to winning the Democratic primary and the general election. But so far, Biden has faced little criticism over his shift on abortion funding relative to other aspects of his record, and polling shows that he remains Catholic Democrats' overwhelming favorite in the presidential field.

Since the days of John F. Kennedy, Catholic Democrats have wrestled to reconcile their church's teachings with their party's politics. That tension has been especially acute when it comes to abortion, with some bishops threatening to deny communion to then-Sen. John Kerry over his support for abortion rights during his 2004 presidential bid. But the church has faced significant upheaval in the 15 years since then, raising questions about whether Biden's leftward step on abortion is a liability with some voters of faith — or a more minor hurdle at a time when Catholics, like the electorate nationwide, are becoming more politically polarized in the age of President Donald Trump.

Steven Krueger, president of the nonprofit Catholic Democrats, warned that "the far left wing of the party has had influence on a number of issues," including abortion, "that is not going to serve candidates well once they're in the general election."

"It's very difficult to kind of tack back to the middle once you take a stand on something as black and white as" the restrictions on federal abortion funding that Biden abruptly came out against in June, Krueger added.

Biden called for ending those four-decade-old limits on government health care spending on abortion, often referred to as the Hyde Amendment, under heavy fire from his Democratic rivals. He made the move with a subtle nod to the devout Catholicism that had initially informed his pursuit of a "middle ground" on the matter.

Biden has demonstrated a deep public connection to his faith, dating to the earliest days of his political career. He regularly attends Mass, has met with both Pope Francis and his predecessor Pope Benedict, and credited Catholicism with helping him heal after his son Beau's death in 2015.

Biden went deeper on the connection between his Catholicism and his stance on abortion during a recent campaign stop at Limestone College in South Carolina, peppering his theological aside with some Latin references.

"I'm prepared to accept for me, personally, doctrine of my church" about when life begins, Biden said, "but I'm not prepared to impose that on every other person."

Abortion is not the only issue on which Biden has split from his church's official stance. He is a longtime backer of LGBTQ rights, including same-sex marriage. And the same phrase he used to describe his new opposition to Hyde — "circumstances have changed" — could also apply to Catholic voters heading into 2020.

According to AP VoteCast, which surveyed voters in the 2018 midterm elections, a majority of Catholics — 57% — said abortion should be legal in most or all cases, while Protestants and other Christians were about evenly divided.

Yet there's significant regional variation in views on abortion. That variability is notable among Catholic voters in the Midwest, where Biden is campaigning as a potential Democratic nominee who's uniquely positioned to win back the less liberal working-class voters Trump appealed to in 2016.

In the East, West and South, Catholic voters were nearly as likely as voters in those regions overall to believe abortion should usually or always be legal. But Midwestern Catholics, whom Democrats need to perform well with to stay competitive in a general election, were significantly less likely than regional voters overall to hold those more permissive views on abortion, 47% versus 58%.

The truest test of Biden's ability to stay dominant with Catholic voters isn't likely to come unless he makes it to a general election against Trump. If that happens, conservatives are likely to try to use the Democrat's shift on abortion against him.

And to be sure, leaders of the U.S. Conference of Catholic Bishops remain stalwart supporters of the restriction on federal funding of abortions, which is a fixture in the law with bipartisan backing.

"When Republicans go after the first, I think they scare people," added Carr, founder of Georgetown University's Initiative on Catholic Social Thought and Public Life. "When Democrats go after the second, which is 'you're going to have to pay for or maybe participate in an abortion,' they scare off other people." 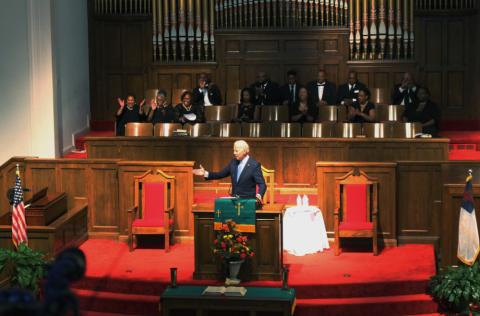 FILE - In this Sunday, Sept. 15, 2019, file photo, former vice president and Democratic presidential candidate Joe Biden attends a service at 16th Street Baptist Church in Birmingham, Ala. Visiting the black church bombed by the Ku Klux Klan in the civil rights era, Democratic presidential candidate Biden said Sunday the country hasn't "relegated racism and white supremacy to the pages of history" as he framed current tensions in the context of the movement's historic struggle for equality. (Ivana Hrynkiw/The Birmingham News via AP, File)

But as Trump's immigration policy stokes religious progressives' interest in applying a "pro-life" ethos to other issues, abortion may not hold as much sway over Catholic voters in 2020 as it did in previous elections.

Sr. Simone Campbell, executive director of the NETWORK Lobby for Catholic Social Justice, lamented that her faith's ethic of protecting life is often "reduced" to the question of whether to "criminalize abortion."

Sr. Carol Keehan, who recently retired as head of the Catholic Health Association, described herself as "extraordinarily pro-life" and supportive of the Hyde Amendment, but she also contended that Biden is "pro-life" on many fronts reflected in other policy decisions.

As religious activists on the left urge voters of faith to consider a more expansive definition of "pro-life," Trump himself may hold the key to Biden escaping significant peril with Catholic Democrats. A Quinnipiac University poll released in May found 55% of Catholic voters saying they would definitely not support Trump's reelection, versus 41% of Protestants and 70% of those with no religious affiliation.

"To the degree Vice President Biden may have given pause to persuadable Catholic voters" with his shift on abortion, Krueger said, "there remains a countervailing imperative for Catholics to replace our nation's 45th president."

[Associated Press religion coverage receives support from the Lilly Endowment through the Religion News Foundation. The AP is solely responsible for this content.]