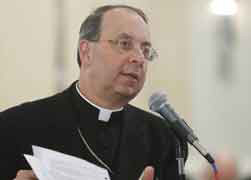 Officials of the Diocese of Bridgeport, Conn., down to their final opportunity to keep documents relating to 23 sex abuses cases out of public circulation, met with all priests and deacons today in an attempt to pre-empt the bad publicity in a worst case scenario.

The worst case for the diocese would be a U.S. Supreme Court decision denying the diocese’s request to keep clergy sex abuse files sealed. The request was passed on earlier this month to the full court by Supreme Court Justice Antonin Scalia. The diocese, in that request, was appealing a ruling by Justice Ruth Bader Ginsburg, who had denied the diocese’s appeal of earlier state court rulings ordering that the documents be released.

The files will remained sealed at least until the full court reviews the request Sept. 29 and decides to either hear the case in its session that begins in October or to vacate the diocese’s request, in effect releasing the documents.

According to one person attending the session, which was closed to the press, Bishop William Lori told the priests “prudence dictates” that the diocese be prepared should the court refuse to hear the case, meaning the documents would be released.

As part of the preparation, Lori is asking priests to prepare an overview of all the diocese has done to protect children to be presented following the post-communion prayer the weekend of Sept. 26. As part of the preparation, said a source who attended the meeting, Lori told those assembled that they would receive a document with questions and answers so that “we can all be singing from the same sheet of music.”

The bishop explained that he has vigorously fought release of the documents primarily because they contain the names of a number of “John Doe” priests who were wrongly accused. Lori and lawyers retained by the diocese who attended today’s meeting said a review of the cases found that they were groundless. He argued that the priests named would have no way of defending themselves if their names were released along with the documents. In answer to a question, he told the gathering that all of the John Doe priests had been notified earlier and that no one would be surprised.

While release of the names of those considered innocent is a fear, at the same time the priests today were told that there is a chance -- based on an earlier ruling by a state court that the names of the innocent be withheld from any public disclosure – that the names would not be released even if the documents were made public.

The 12,600 pages of depositions, exhibits and legal arguments in question relate to a 2001 settlement of 23 cases involving seven priests. The records were sealed when the cases were settled just before they went to trial.

The priests were told today that none of the documents contain any “bombshells” and that most of the material was reported in a 2002 article in The Hartford Courant.

Following the settlement in 2001, the Courant along with The Boston Globe, The New York Times and The Washington Post, petitioned to have the documents released. It is presumed the documents would reveal details of how Cardinal Edward Egan, the recently retired archbishop of New York, had handled the sex abuse crisis during his tenure as bishop of Bridgeport from 1988 to 2000.

According to the source who attended today’s meeting, diocesan officials, anticipating a question, said that no money was used from the annual bishop’s appeal to pay legal costs in the attempt to keep the documents sealed. However, it was disclosed that the diocese had received large anonymous gifts specifically for that purpose and also that the diocese had used unspecified “unrestricted funds” for legal costs.

No amount was given for the unrestricted funds used.

Lori will be meeting with other diocesan personnel tomorrow in an attempt to prepare Catholics in the diocese for responding to questions that they might be asked in work or social situations.

Roberts is NCR editor at large and can be reached at troberts@ncronline.org.