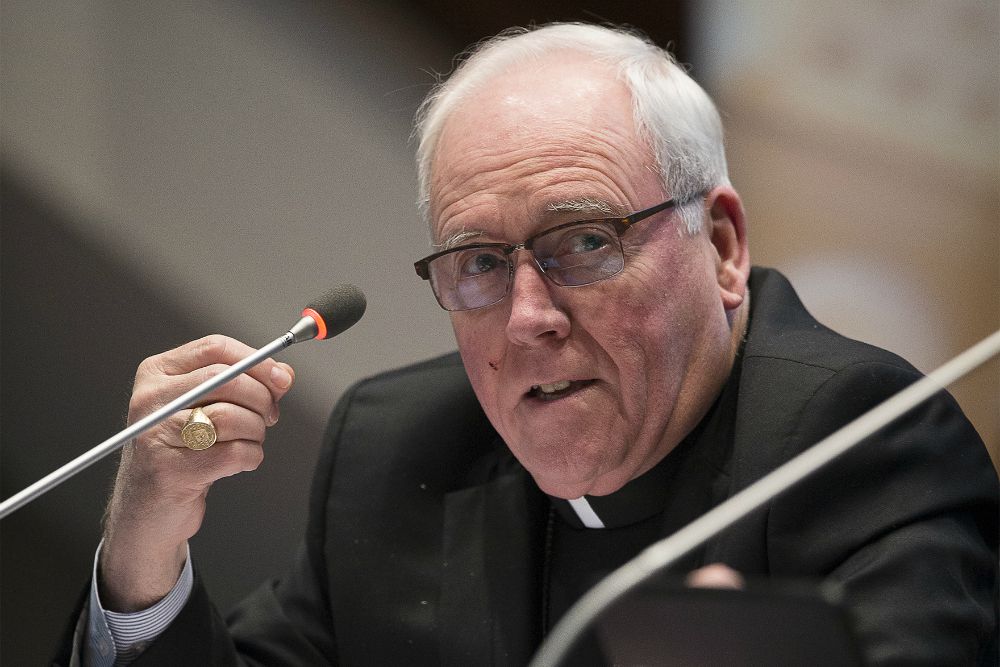 Bishop Richard Malone of Buffalo, New York, is seen at the headquarters of U.S. Conference of Catholic Bishops in Washington Jan. 17, 2018. (CNS/Tyler Orsburn)

News of the visitation, which will include "a review of the Diocese of Buffalo," came via a communique released earlier by the apostolic nunciature in Washington, which is coordinating it.

"Bishop Malone has committed to cooperate fully and stated that this visitation is for the good of the church in Buffalo," said a statement issued by the Buffalo Diocese. "The purpose of an apostolic visitation is to assist the diocese and improve the local church's ability to minister to the people it serves."

For more than a year, the Buffalo bishop has faced questions about how he has handled allegations of abuse against diocesan priests.

"This is a difficult period in the life of the church in Buffalo," DiMarzo said in an Oct. 3 statement. "I pledge I will keep an open mind throughout the process and do my best to learn the facts and gain a thorough understanding of the situation in order to fulfill the mandate of this apostolic visitation."

The nunciature's communique said such a visitation is a fact-finding mission that reports directly to the Holy See, specifically the Congregation for Bishops, to evaluate situations in dioceses.

DiMarzio "has been assigned by the Holy See to conduct this fact-finding mission," it said, adding that Msgr. Steven Aguggia, judicial vicar of the Brooklyn Diocese, "will serve as secretary."

"This visitation is a nonjudicial and nonadministrative process that requires confidentiality," it continued. It also noted that it is "not subject" to the "motu proprio" "Vos Estis Lux Mundi" ("You are the light of the world") issued in May by Pope Francis to help the Catholic Church safeguard its members from abuse and hold its leaders accountable.

Upon completion of the visitation, DiMarzio will submit a report to the Congregation for Bishops.

"Our Holy Father has a great devotion to Our Lady Untier of Knots," the Brooklyn bishop said. "I beg the intercession of the Blessed Mother, that I may be an instrument for surfacing the truth so that justice might be served and God's mercy experienced."

The Brooklyn Diocese said neither DiMarzio nor his spokeswoman would be making further comments on the matter.

The Buffalo Diocese said in a statement: "Heartfelt gratitude is expressed to all those who are working so generously on this visitation — first, to our apostolic visitator, Bishop DiMarzio and his assistant, and to the Catholic community of Buffalo, including the lay faithful and the clergy."

"The mission of the church in Buffalo," it added, "continues to be to seek justice and compassion for the victim-survivors of sexual abuse and their families and to continue the good works of the church, fulfilled on a daily basis, by faithful men and women who serve a wide spectrum of our diocese."

The latest criticism of Malone came in early September of this year over his handling of a situation involving two priests' relationship with a seminarian.

During a Sept. 4 news conference, Malone said the majority of priests and parishioners in the diocese supported him and he would not resign over his handling of a situation he described as "a very complex, convoluted matter."

He called the news conference to discuss a letter from Fr. Ryszard Biernat to a seminarian, Matthew Bojanowski, and allegations by Bojanowski that another priest, Fr. Jeffrey Nowak, harassed him. Biernat began a leave of absence from his position as the bishop's priest-secretary Aug. 14. He had been in his position since 2013.

Malone said Nowak had not been accused of engaging in sexual contact with an adult or child and that the diocese was unaware of any activity that endangered parishioners or the public. The bishop placed the priest on leave because he refused to seek a behavioral assessment.

"I'm here because I feel an obligation as the one who was sent here to lead this diocese, to carry on, and once again, if I thought the majority of Catholic people in particular were calling for my resignation, that would be a different story," Malone said at the news conference.