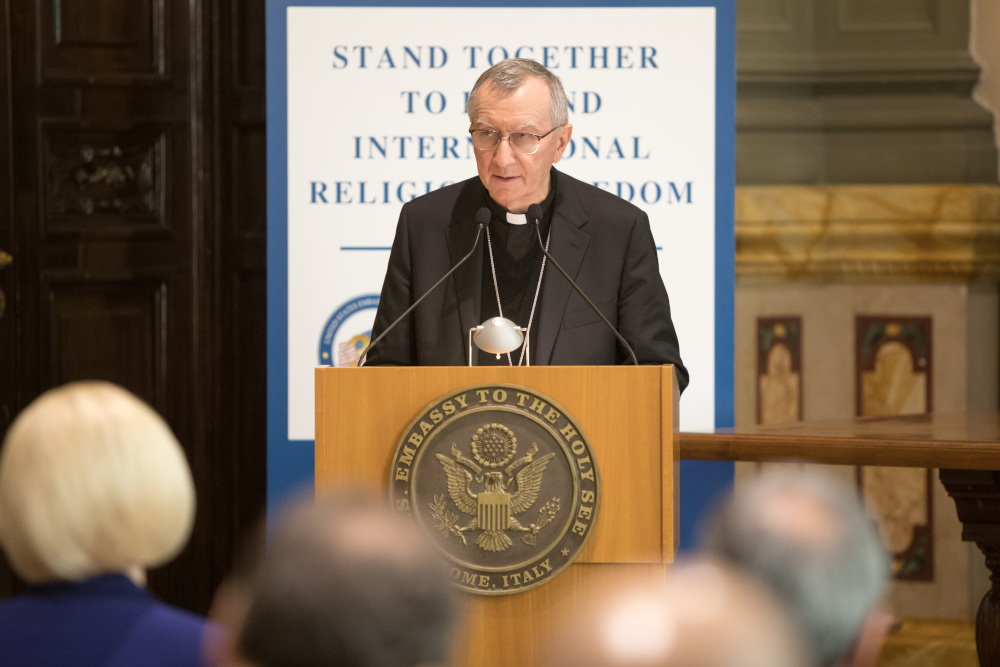 Critics of an agreement signed between the Vatican and the Chinese government must be patient and not quick to judge a deal that is meant to protect religious freedom, the Vatican secretary of state said.

After addressing a symposium on religious freedom April 3, Cardinal Pietro Parolin told journalists that the agreement was signed "to advance religious freedom in the sense of finding (some) normalization for the Catholic community" as well as other religious minorities.

"Our hope is that it will help, not limit, religious freedom. But we should be patient," he said, "I know that people want things immediately."

"History was not built in one day; history is a long process. And I think we have to put ourselves in this perspective."

Parolin was among several guest speakers at the "Stand Together to Defend International Religious Freedom" symposium hosted by the U.S. Embassy to the Holy See. Also present was Callista Gingrich, U.S. ambassador to the Holy See.

The cardinal's comments came amid recent criticism by a U.S. official regarding the "provisional agreement" on the appointment of bishops signed by representatives of the Vatican and the Chinese government in mid-September.

According to the Reuters news agency, Sam Brownback, the U.S. ambassador-at-large for international religious freedom, said the agreement has not ended the Chinese government's repression or persecution of Catholics.

"Since this provisional deal was announced last year, the Chinese government's abuse of members of the Catholic community has continued. We see no signs that will change in the near future," Brownback said March 8 at an event at the Hong Kong Foreign Correspondents' Club.

The agreement has also been panned by several church leaders, including Cardinal Joseph Zen, the 87-year-old retired archbishop of Hong Kong, who has been one of its strongest critics.

In response to reporters' questions on the sidelines of the symposium, Parolin said he "sometimes feel a little bit lost" when people criticize the agreement without allowing things "to work peacefully."

"My impression is that (people) want things done immediately," he said. "No; we know that things in history are changing slowly."

In her opening remarks at the symposium, Gingrich underlined the need to safeguard religious freedom, particularly for minorities in countries with strict religious restrictions.

The U.S. ambassador noted the persecution of the Muslim Uighur ethnic minorities in China, citing the case of a mother who was separated from her children and tortured by government officials.

The Chinese government's actions, she said, are "a deliberate attempt to persecute and control these Muslim minority groups."

Highlighting the rise of anti-Semitism around the world, as well as the persecution of Orthodox Christians and Jehovah's witnesses by Russian authorities, Gingrich said that "global crises require global solutions" and that governments, religious orders, civil society and media organizations must confront those who suppress religious freedom.

The United States, she said, "will not hesitate to speak out against these atrocities. We will continue to be a voice for those who are persecuted and repressed."