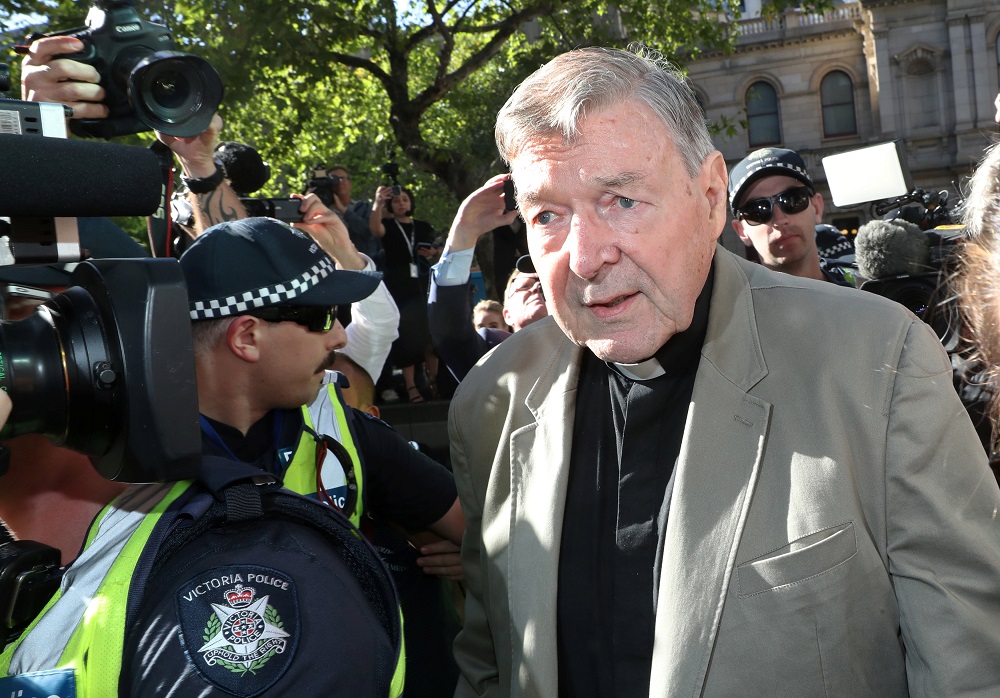 The former prefect of the Vatican Secretariat for the Economy and former member of Pope Francis' Council of Cardinals will remain behind bars ahead of his sentencing March 13 after the chief judge of the Victorian County Court, Peter Kidd, who presided over the trial, heard pleas for his sentence Feb. 27.

Australian lawyers said it could take more than a year for an appeal to be heard and adjudicated if the case is treated normally. A successful appeal could see the conviction overturned or result in a retrial, depending on the grounds of any successful appeal.
In December, Pell was convicted of sexually abusing two 13-year-old choirboys in 1996 in the sacristy of Melbourne's St Mary's Cathedral. He was found guilty of one count of sexual (oral) penetration with a child under age 16 and four counts of indecent acts with or in the presence of a child under 16, but the court's decision was gagged at the time pending a second trial. This was due to take place in April, but prosecutors withdrew the charges, allowing the convictions to be revealed Feb.26.
"At the moment I feel this was callous, brazen offending," Kidd told the standing room only court, as he prepared to listen to arguments on sentencing.
"He did have in his mind some sense of impunity. How else did he think he was going to get away with it," adding that he believed there was an "element of brutality — this was an attack."
Pell's counsel, Robert Richter, argued that this was "no more than a plain vanilla sexual penetration case where the child is not actively participating" drawing gasps from the courtroom, said people present.
Richter presented a raft of character references for Pell, including from former Australian Prime Minister John Howard and Greg Craven, president of the Australian Catholic University.
Prosecutors presented a 14-page statement from the living victim, who cannot be named, and a statement from the father of the deceased victim.
Kidd also emphasized that he was sentencing Pell and not the church, which has been embroiled in sex abuse scandals in Australia for decades and was the biggest offender targeted by a five-year Royal Commission into Institutional Child Sexual Abuse, which ended in 2017.
The cardinal's lawyers have withdrawn a bid for bail while he awaits a decision on his appeal because, they said, Pell "believes it is appropriate for him to await sentencing." The cardinal continues to maintain his innocence.
The appeal has been lodged on three grounds, including that the unanimous conviction by a 12-person jury is "unsafe" and "unsatisfactory." The appeal process is long and complex; the first step is for the prosecution to respond to the defense appeal within 28 days.

Following that, a date will be set by the Victorian Supreme Court's Appeals Division — the highest court in the state — to hear arguments from prosecutors and defense counsel and decide whether it believes there are grounds to hear a full appeal. If so, an appeal hearing will take place, but these two processes could also take place at once. A decision on an appeal would be heard by one justice and a full appeal, or joint process, by three justices.
If the appeal is successful due to a legal mistake by the trial judge there will be retrial, but if the conviction is found to be "unsafe and unsatisfactory," the conviction will immediately be expunged and Pell will be set free.
During the appeal process, Pell has been banned by the Vatican from exercising ministry or having contact with minors.
"I respect the fact that this case is under appeal, but it is the victims and their families I am thinking of today, and all those who have suffered from sexual abuse by those they should have been able to trust, but couldn't," said Australian Prime Minister Scott Morrison.
Related: Cardinal Pell found guilty of sex abuse, expected to appeal, reports say

"Their prolonged pain and suffering will not have ended today. While due process continues, our justice system has affirmed no Australian is above the law."

The same day Pell was sentenced, the Vatican announced his case would be investigated by the Congregation for the Doctrine of the Faith.

According to data from Australia's Sentencing Advisory Council, 76.9 percent of cases of sexual penetration with a child under 16 cases between 2011 and 2016 resulted in a term of imprisonment, with the remainder handed community correction orders, Australian media reports noted.

Australia's six states and two territories all have different sentencing patterns. Victoria is seen by lawyers around the country as one of the more lenient jurisdictions. For instance, in New South Wales, Australia's most populous state, sentencing for charges such as those Pell has been found guilty of are approximately double in length to those handed down in Victoria, lawyers told Catholic News Service.