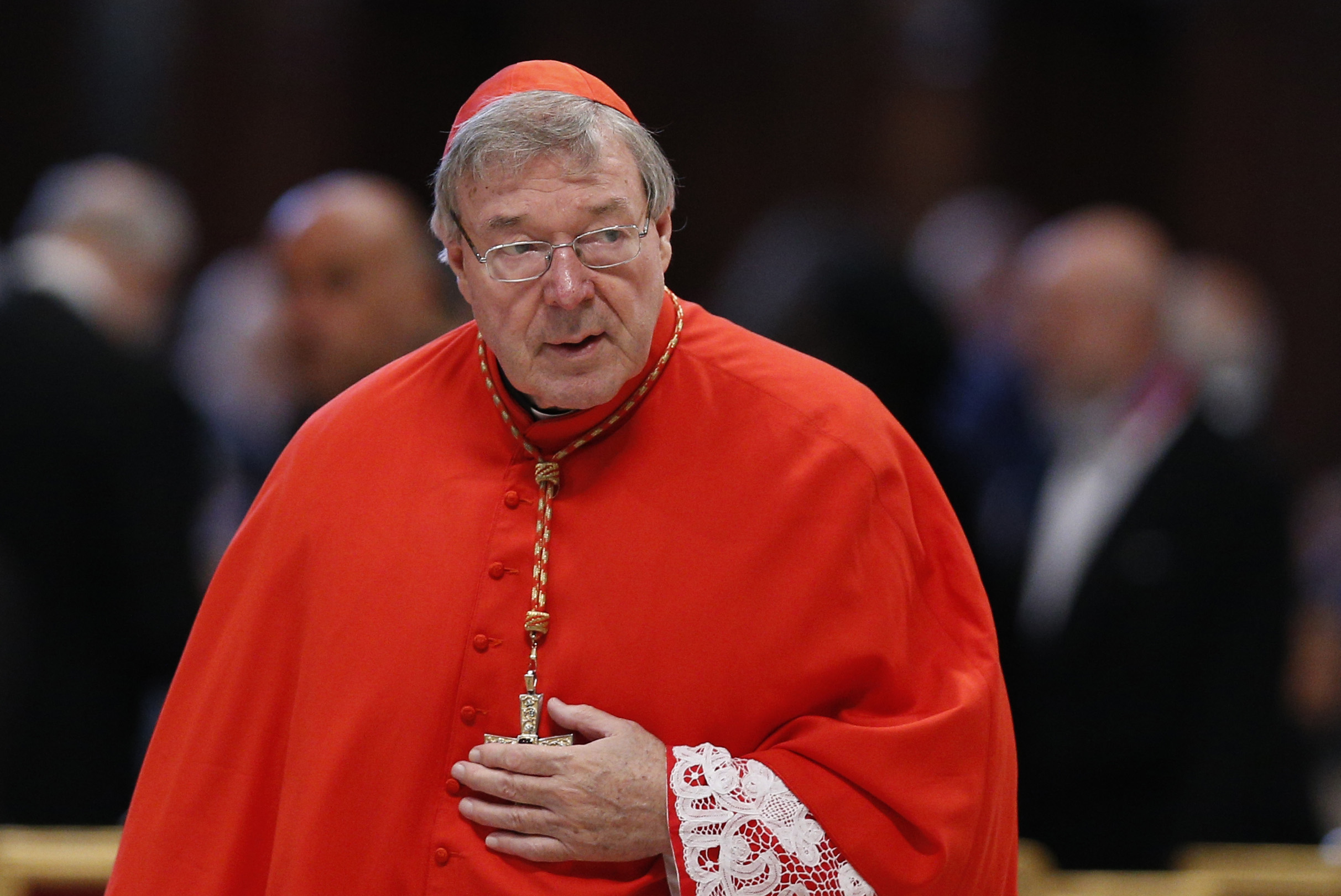 Australian Cardinal George Pell, prefect of the Vatican Secretariat for the Economy, arrives for the closing Mass of the Synod of Bishops on the family in St. Peter's Basilica at the Vatican in this Oct. 25, 2015, file photo. An Australian court found Cardinal Pell guilty on five charges related to the sexual abuse of two 13-year-old boys; the verdict, reached in December, was announced Feb. 26, 2019. Sentencing is expected in early March, but the cardinal's lawyer already has announced plans to appeal the conviction. (CNS photo/Paul Haring)

Tuesday, February 26, 2019, will go down as probably the worst day yet in the entire 231 year-long history of Australian Catholicism. We thought we'd seen it all during the four years of Royal Commission into Child Sexual Abuse, especially as terrible stories of mistreatment of children by clergy and in Catholic institutions were recounted. But George Pell's conviction leaves that shame for dead. Australian Catholics are stunned, outraged and angry at the lack of accountability and betrayal as we are left utterly leaderless by bishops who seem to have run for deep cover from faithful Catholics and everyone else.

First, the facts of Pell's conviction. There were two sets of charges. The first concerned two incidents in December 1996 and early 1997 in Melbourne's St. Patrick's Cathedral soon after Pell was appointed archbishop there. After a three-week trial, he was found guilty on December 11, 2018, of sexually penetrating a 13-year-old choirboy, as well as four charges of indecent acts with the same choirboy and another choirboy.

However, there was another set of charges of indecent assault of boys in a swimming pool in Pell's hometown of Ballarat in the 1970s when he was a priest. These charges had not come to trial, so Judge Peter Kidd imposed a media gag order so that potential jurors would not know and be influenced by the cathedral convictions. But in the social media age, such gags are useless and when the Ballarat charges were dropped by prosecutors last Tuesday, the order was lifted and the firestorm began.

Pell strongly maintains his innocence and has appealed; it will probably be several months before the appeal is heard. Some Catholics, among them progressives, think the appeal is based on strong grounds and that Pell will be found innocent. They see him as a scapegoat for all of the failures and mistakes of Catholic leadership. Other Catholics accept the guilty verdict and feel the appeal is based on flimsy grounds.

There is seething anger within the wider Australian community, much of it fanned by social media, about sexual abuse and church cover-ups. Following Pell's conviction this has exploded. "Catholicism" is now a dirty word in Australia, and as in most Anglophone countries there's deep-seated sectarian bigotry against Catholics which surfaces in times like these.

Beyond anger and outrage, what is really going on here?

Originally from the provincial city and diocese of Ballarat, since the late-1980s, Pell has been an influential figure in both church and state. Rome educated and with a doctorate from Oxford, he was successively seminary rector in Melbourne in 1985 — on arrival he sacked all the moderately progressive staff — auxiliary bishop in 1987 and archbishop of Melbourne in 1996. He moved to Sydney in 2001 and in 2014 he became Pope Francis' finance chief.

Pell's ecclesiastical trajectory was supported by a small but powerful coterie of reactionary Catholics. They spotted him early on as a culture warrior and were shrewd enough to use their Roman connections to promote his career. From 1990 to 2000, he was a member of the Congregation for the Doctrine of the Faith (CDF) under Joseph Ratzinger. He was seen as an ideal John Paul II bishop: doctrinally rigid, willing to confront secular society, tough on Catholic dissidents and unflinching in protecting the interests of the church. During his decade on the CDF at least three Australians (I was one) were "delated" and subjected to doctrinal examination by CDF.

But Pell was active in Rome on other fronts. Through friendship with curial cardinals like Giovanni Battista Re at the Congregation of Bishops, he began to influence the appointment of Australian bishops. By any assessment, it must be said that this has resulted in the appointment of a number of hyper-orthodox clerics, lacking any pastoral sense.

Prior to Pell's impact on appointments, the Australian bishops generally took a reconciling, tolerant stance; clericalist for sure, but essentially pastoral. But in late-1998 the bishops were outmaneuvered by a tiny group of reactionary laypeople, with the support of Pell, at the synod for Oceania in Rome. There had been constant complaints from Australia to Rome about the "parlous state" of doctrinal "orthodoxy" and pastoral "deviations," like the Third Rite of Reconciliation with general absolution.

A "Statement of Conclusions" was imposed on the bishops, including a list of the "weaknesses" of Australian Catholicism. These included a crisis of faith arising from cultural "tolerance," which led straight to "indifference" about faith and morals. There were also crises in "Christology," "Christian anthropology" and "ecclesiology," all clear references to the views of the three dissidents already reported to the CDF. The statement went down like a lead balloon among Australians generally and in the media; if there's one thing you don't attack here, it's our presumed "tolerance."

By 2000, Pell was a national figure. He presented an image of rigid orthodoxy and his public persona was unsmiling, his speaking style wooden. There was a distinct lack of empathy in his presentation; people felt he was arrogant. In personal interactions a different Pell appeared, pleasant, a bon vivant with a sense of humour. In both Melbourne and Sydney, he built relationships with powerful and wealthy people, demonstrated by the fact that former Prime Minister John Howard wrote a character reference for him to Judge Kidd.

He expressed views on a whole range of subjects, but particularly gender- and sex-related issues, in forceful, uncompromising rhetoric. His unfeeling and sometimes colorful intransigence made him infamous, like his comment that homosexual activity was "a much greater health hazard than smoking." His outspoken global warming denialism, which he constantly touted in his regular column in a Murdoch-owned newspaper, utterly infuriated scientists. 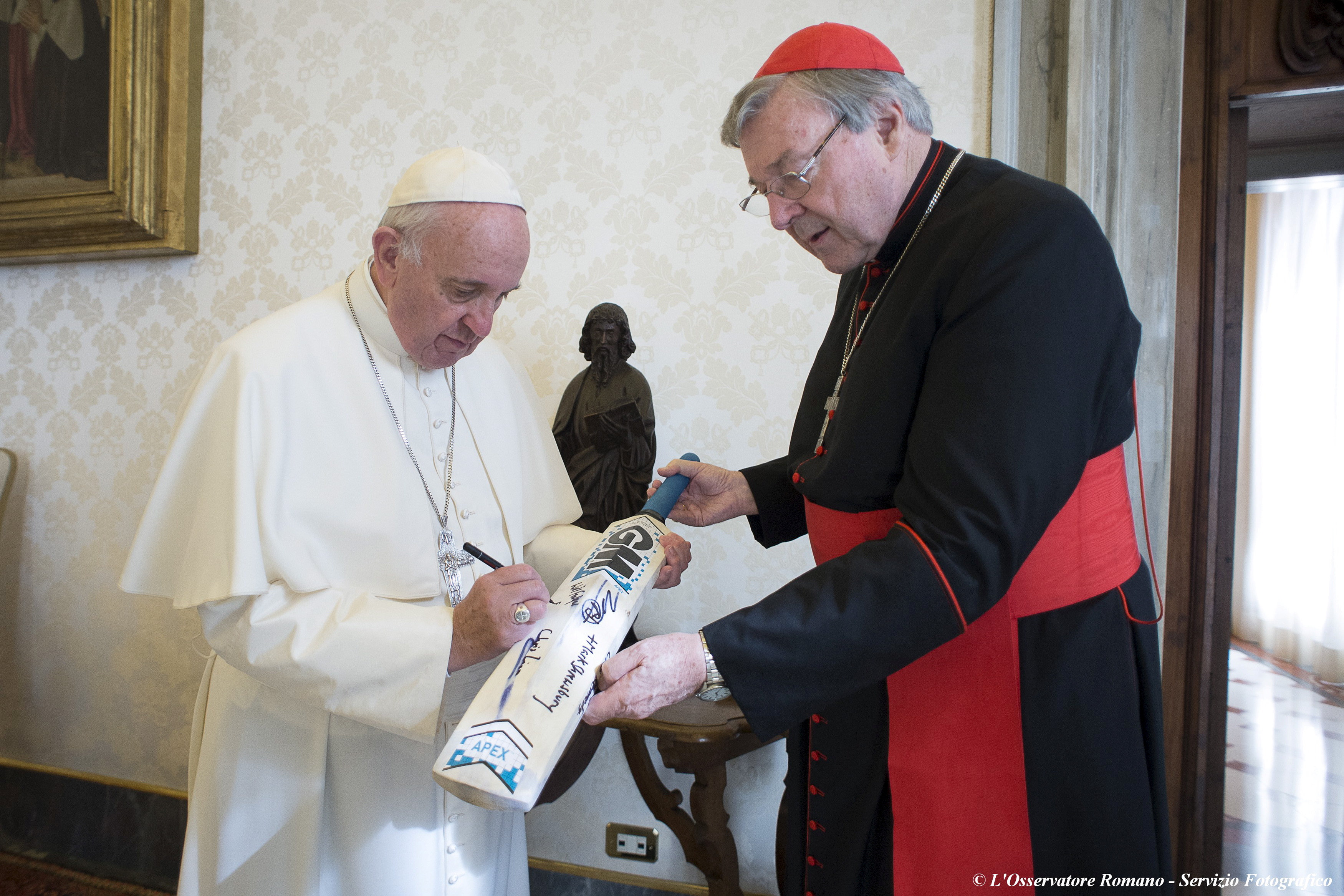 He soon became the face of a rigid, hectoring, boots-and-all style of Catholicism that was completely unwilling to compromise with the broader culture. An example was when he barred the Sisters of Charity from Sydney's St. Vincent's Hospital from setting up a medically supervised safe injecting room for heroin addicts.

His 2007 book God and Caesar attacked the "widespread heresy" of the "primacy of conscience" which, he claimed, led Catholics to "a disordered vision of human sexuality" that allowed them to approve of contraception, abortion and embryo-destructive research. Pell calls primacy of conscience the "Donald Duck heresy," based on "an unshakeable conviction of self-righteousness," that often results in disastrous decision-making. He often spoke of "the hard teachings of Christ," which he was unprepared to soften in any way.

Perhaps the major source of public fury with Pell is his response to sexual abuse. As early as 1990, I became aware of sexual abuse by clergy though the National Catholic Reporter and journalists like Jason Berry. I tried, unsuccessfully, to forewarn the Australian bishops. However, by the late 1990s, they were beginning to realize the size of the problem and acted to set up a national process called Towards Healing to help victims. Never a team player, Pell set up his own process known as the Melbourne Response. It meant that he kept control, especially of financial payouts.

After moving to Sydney, he became very tough with abuse claimants who stepped outside church-established systems and sued the archdiocese. An infamous example was the John Ellis case when Pell's lawyers claimed that the church could not be sued because its assets were held in trust. It turned out the lawyers were right, but the consequences of this decision for the church were far more disastrous than any financial payout. Ellis, who had been seriously abused by a priest, was tossed aside and utterly crushed without the slightest attempt at pastoral care or empathy. All the lawyers and Pell cared about was negative publicity, but as knowledge of the Ellis case spread, that is precisely what the church got.

It was this type of behaviour that is at the root of the public fury about Pell and Catholicism. People see it as hypocrisy. Here was the man who limited payments to victims and who pursued John Ellis to a breakdown and near bankruptcy, and was now himself found guilty of sexual abuse.

As Pell's lawyers tried to talk down the length of his imprisonment after the guilty verdict, Judge Peter Kidd was blunt: "I want to make it plain I see this as a serious example of this level of offending. I see this as callous, brazen offending. Blatant. I think it did involve breach of trust, he did have in his mind some sense of impunity, how else did he think he was going to get away with this exploiting of two vulnerable boys?"

The word "impunity" is the clue here. Pell seems to have felt himself beyond ordinary scrutiny, that somehow the civil law didn't apply to him. If anything, Pell's conviction makes it absolutely clear that the church is subject to the civil law and that clerical impunity will not be tolerated. All Catholics, especially priests, bishops and the Vatican need to think very seriously about that.

[Paul Collins of Australia is a church historian and author. His latest book is Absolute Power (Public Affairs, 2018).]

Read this next: Australia's plenary can wait: We need an adjournment on scandal